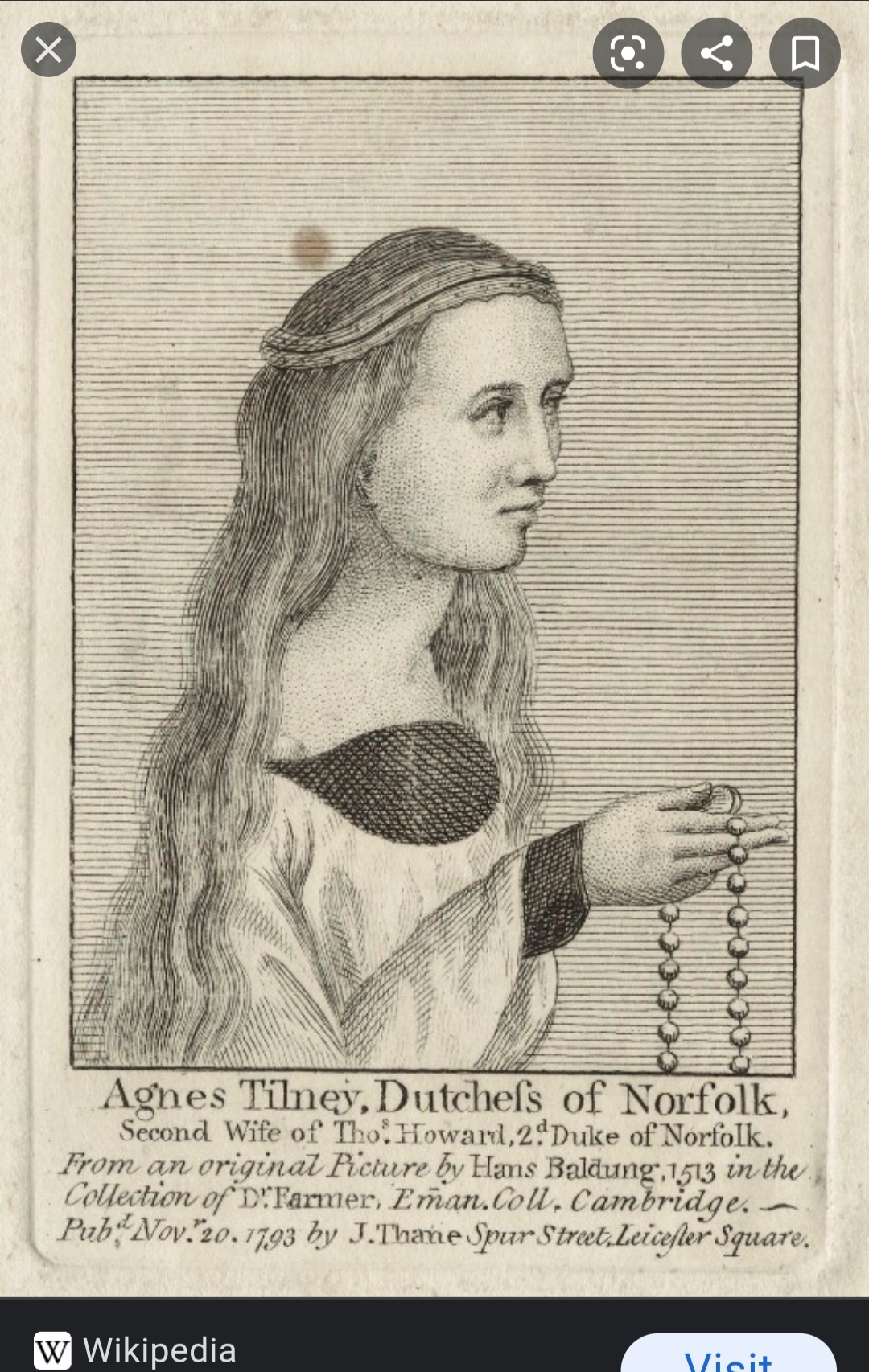 The Duchess with Two Step-Granddaughter Queens

Agnes is best known today for being the step-grandmother to both Anne Boleyn and Catherine Howard, who both went on to become Queen Consorts of England after marrying Henry VIII.

Agnes was born into an upper-class family with connections in the aristocracy. Her family had supported Richard III and Edward IV during the Wars of the Roses, and after the Battle of Bosworth their fortunes waned significantly. Eventually though, the family reclaimed their fortunes and regained a place at the court of Henry VII.

Agnes married a widow and had several children with him (he had previously been married to her cousin—to say the family trees of English aristocracy around this time are confusing as heck is an understatement!). Agnes’s husband was closely involved with the king, Henry VII, and helped in the negotiations of Henry’s children Prince Arthur and Princess Margaret.

After Henry VII died, Agnes’s husband continued to help the crown once it fell to the new king, Henry VIII. After Agnes’s husband helped the English defeat the Scots at Flodden Field in 1513, the king was so grateful he resurrected the Dukedom of Norfolk the following year, styling Agnes’s husband as the Duke and Agnes herself the Duchess of Norfolk.

Agnes enjoyed the success of her husband’s relationship with the king, and she was even awarded the honor of being his eldest daughter Mary (the future Mary I)’s godmother.

Three years after Agnes’s husband died, Henry VIII successfully rid himself of his first wife, Catherine of Aragon, and married Anne Boleyn. Agnes was at first unhappy with the king’s plan to divorce, but changed her tune after she learned the new queen would be a family relative. Agnes was continually honored throughout this period, and she is said to have held the new princess (the future Elizabeth I) at her baptism as well as acting as her godmother as well.

As time went on, Agnes became less and less concerned with the pettiness of court life and was soon known to be a bit of a grouchy old woman. Can you blame her though? At the aforementioned baptism, Agnes was literally the baby’s step-great-grandmother; she was allowed to be a bit cynical towards the youth around her. She was also devoutly religious and was said to wear a hair shirt under her otherwise pious clothing as a symbol of her devotion to her religion. Around this same time period, Agnes also may have gifted recipes for medicines to Cardinal Wolsey, leaving some to speculate she was a bit of an apothecary as well.

After the death of her husband, Agnes was singularly responsible for the vast estates held by the family. Her household was around one hundred people, and Agnes was responsible for them all. She oversaw every aspect of daily life, from smoking meats to splitting wood and weaving clothes. To say this was unusual for a woman to be in charge in such a way for her time period would be an understatement.

Catherine Howard, Agnes’s step-granddaughter, lived with Agnes for a few years, but wasn’t treated like a high society woman. Instead, she was given a rudimentary education, slept in a communal dormitory, and was given light household duties to perform, similar to a servant. This makes the fact she was having an affair even more, well, impressive doesn’t seem quite the proper word but there you go.

That’s right, Catherine had at least one affair, if not two, in the years she was living with her step-grandmother. The first (which may not have gone as far as the next) was with the man hired to teach Catherine and the other ladies of the house how to play instruments like the virginal (take whatever tone of irony from this that you want). The next worked for the household and was actually given access to Catherine’s dormitory where he spent several nights…not leaving six inches for the Holy Ghost between himself and the future queen if you know what I mean.

By that time, Agnes was old and also one of the richest women in the country. One of her sons was constantly asking her for money, one of her step-granddaughters was doing the things already mentioned above, and Agnes was ready for retirement to say the least.

Agnes would later feign ignorance, but to say she was unaware of what Catherine was doing is patently false. It has been documented that Agnes caught Catherine and her boyfriend locking lips in the hallway and had them both punished. But its telling that Agnes didn’t insist they break up or split them apart either. After Catherine’s first jilted lover learned of her new relationship, he wrote a letter with the intention of Agnes reading it. When Catherine learned of the letter, she and her new beau decided to pretend they would get married even though they hadn’t secured Agnes’s permission to do so.

In the fall of 1539, Catherine was sent away from Agnes’s home to join the latest queen’s household. By that time, Henry had recently married Anne of Cleves. Catherine was sent to advance her family’s place at court. She did more than that, however. By the following year Henry had dumped Anne and was getting hitched to Catherine despite their wide age gap. Only a few months after the wedding, Catherine began a new affair with one of her cousins.

Unfortunately for Catherine, the king soon realized his fetching new bride wasn’t the virginal prize he had originally assumed. Only a year after saying “I do”; the king was informed of Catherine’s past indiscretions. And if you know anything about history, you probably know Henry wasn’t the forgiving type.

Several of Agnes’s family members, including the Dowager Duchess herself, were arrested and sent to the Tower of London after being charged with conspiring to cover up Catherine’s previous relationships. Catherine herself was eventually executed. Agnes was released the following year, but her family name had been thoroughly dragged through the mud to say the least.

She died only a few years later and was buried at Thetford Abbey. According to her final wishes, her body was later moved Lambeth Church in Surrey. The following year, Agnes’s stepson was able to regain the family’s fortune, including twenty-four estates scattered around England.

Agnes is one of those forgotten figures of English history, which is a shame because she played a pivotal role in one of its best-remembered and studied chapters. The image of Agnes shown here is an engraving that was made of her several years after her death. Agnes was an incredibly strong and, shall we say it, bada** grandmother. All she wanted was to be left alone on her various estates, and instead she had to take care of her step-grandkids who kept trying to mess everything up. Grandchildren, what can you do, right?

The Other Tudors: Henry VIII's Mistresses and Bastards by Philippa Jones