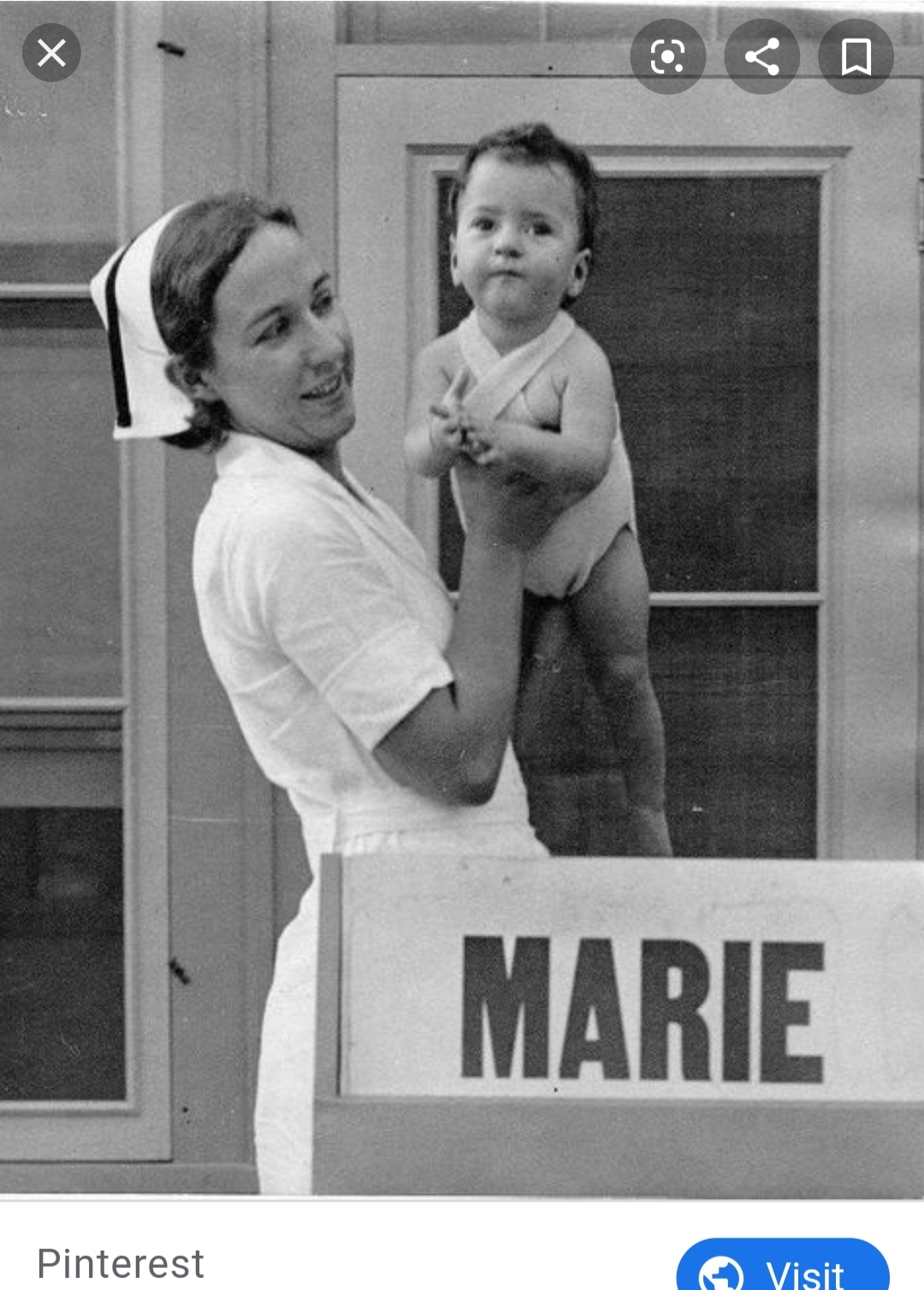 “I have an announcement to make. I am going to enter a convent and serve God. I have thought of it for a long time. I have prayed, and I have decided. I care nothing for the things of the world. I feel I belong in a convent. It is the only place where I can be happy.”

The quints were born two months premature; their parents having no idea Mrs. Dionne was pregnant with more than one child. At the time of their birth, combined, the five girls weighed thirteen pounds six ounces (though soon after they began to lose weight). Émilie and Marie were both born still inside their amniotic sacs, the smallest of the five.

Enough about all the quints in general, let’s talk about Marie.

Marie was the only of the girls to not have a counterclockwise whorl in her hair.

Marie was the first to leave the others, entering Les Servants du Tres Saint Sacrement or The Servants of the Blessed Sacrament convent when she was nineteen. Instead of the normal workings one associates with nuns, like ministering to the poor, the members of Blessed Sacrament spent their days in perpetual adoration of the Eucharist. They prayed for three hour stretches in groups of two or three, twenty-four hours a day, seven days a week. When they weren’t praying, the nuns sewed alter clothes and made Communion bread. If Marie had stuck with it, she would have never been able to set foot outside the convent for the rest of her life. Visitors could only come for one hour a month and were separated from the nuns by a wooden lattice structure. Marie was only allowed to write two letters a month as well.

When Émilie died, Marie was the most profoundly affected. After the funeral, Marie’s mother and one of their sisters had to help her out of the church, and her sobs during the ceremony were witnessed by everyone there that day. At the burial site, cameras recorded Marie almost in a trance-like state.

After Émilie’s death, Marie attempted to return to the convent, but failed. Two months later, suffering from recurring anemia and chest pains, Annette moved her sister to the Hospital where Cecile and Yvonne worked. After Marie was discharged, she and Annette rented a two-bedroom apartment in Montreal.

Because her career as a nun had failed, Marie decided to be a florist instead. She spent two months learning everything there was to know about the floral industry, but when the time came for her to receive the money from her trust to open the shop, the guardians of her money denied her request. Finally, the sisters concocted a strategy to get the money, and Marie opened her store on Mother’s Day 1956, called Salon Émilie. And while the store opened to great fanfare, by the end of the night, Marie had already given away over $600 worth of flowers. After six months, Salon Émilie closed its doors for the final time.

Marie first met her future husband when working under a false name at another flower shop. They married in such secrecy that Annette, Cécile, and Yvonne did not attend the ceremony. Marie would suffer two miscarriages early in her marriage, before she finally had two girls, the first of whom was named Émilie. Eventually, Marie would leave her husband, who was controlling and authoritarian to put it lightly. Marie rented a small apartment in Montreal for her and her daughters to live. Around this time, Marie also began dating her doctor. Her friends worried about her. Marie would faint at times, and her emotions were all over the place. She started seeking more and more intense therapeutic treatments, eventually receiving electro-shock therapy. By 1969, Marie had turned to drinking as well, and placed her daughters, eight and six years old, in a foster home run by nuns.

Annette began calling Marie every day to check on her. One Monday in early 1970, Marie didn’t answer. Annette continued to call every day, but by Thursday she knew something was wrong. Annette’s husband and Marie’s boyfriend arrived at the apartment later that day. Marie was found dead in her bed, with several medication bottles located on her bedside.

While Marie’s cause of death was never officially determined, her ex-husband told the world she had died from a brain embolism. However, rumors continued to swirl, and people came to their own conclusions. She had been dead several days by the time her body was discovered, and so finding the true cause was impossible to determine. Marie was thirty-five years old.