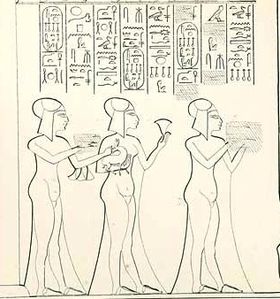 It is believed Setepenre was born between the ninth and eleventh years of her father’s reign.

The oldest image of Setepenre is a depiction of her as a baby sitting on her mother’s lap. The fresco is badly damaged and only a small portion of Setepenre’s image remains. The image is believed to date to the ninth year of Akhenaten’s reign, which is how historians have gathered Setepenre’s approximate birth year.

The next image of Setepenre appears during the twelfth year of her father’s reign, in which all six daughters appear during the “Reception of Foreign Tributes” which took place in winter.

On one wall of her father’s tomb, five of the royal princesses are named (though Neferneferure’s name was later plastered over) and only four are depicted. Historians take this to believe Setepenre had died before this image was struck, before her sister Neferneferure (though in close succession to one another). Setepenre is also missing from the depiction of Meketaten’s funeral, meaning she likely also predeceased a second of her sisters. Some believe Setepenre was both the youngest and first of the six royal daughters to die.

It is believed Setepenre died before her sixth birthday, around the thirteenth or fourteenth year of her father’s reign. Little else is known of her short life.

To learn more about the Amarna Period, click the link to Meketaten's profile or on the words highlighted above.