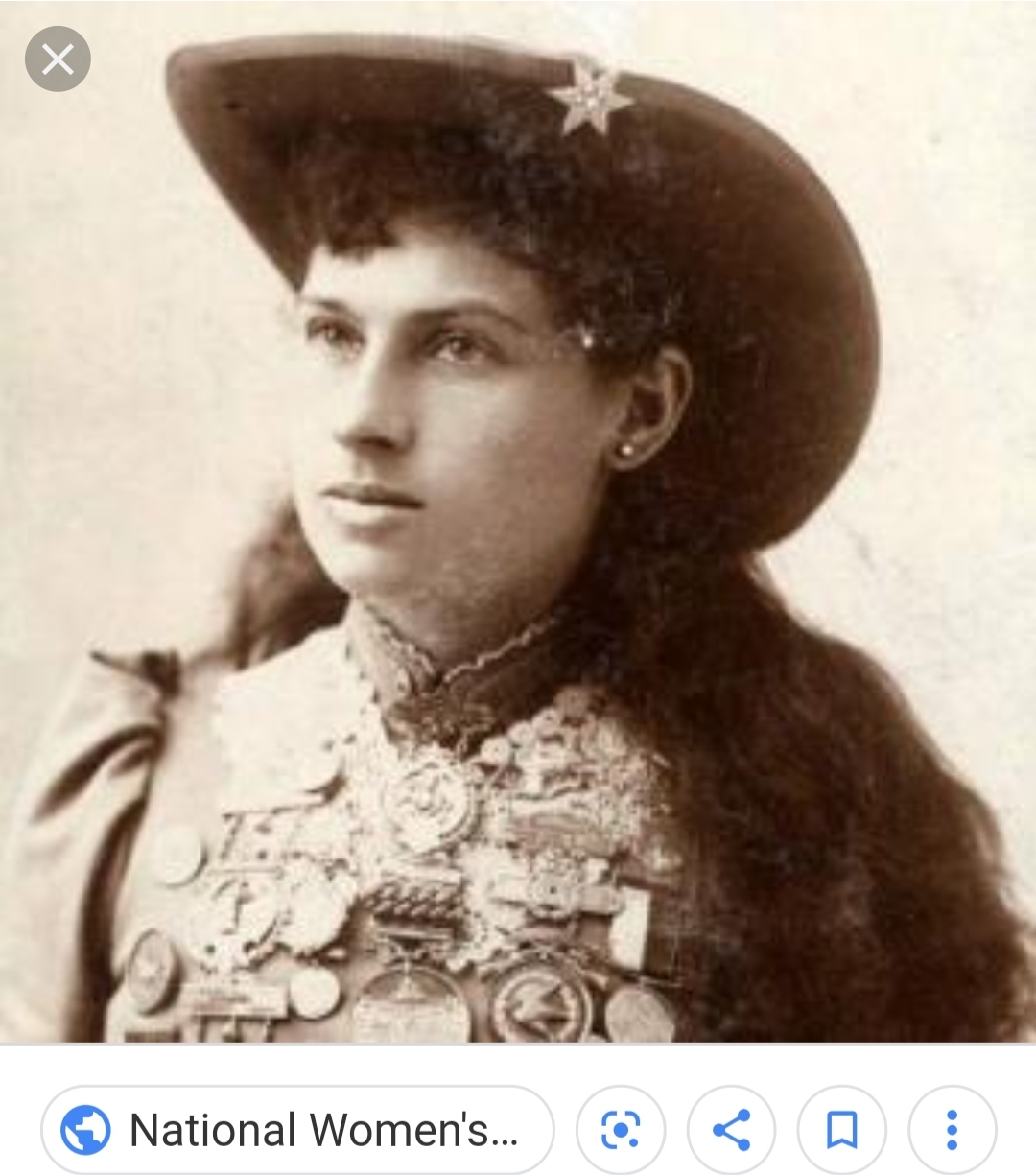 "I for one feel confident that your good judgement will carry America safely through without war--but in case of such an event I am ready to place a Company of fifty Lady sharpshooters at your disposal," -Annie in a letter to President William McKinley

Also Known As: Annie Oakley or Little Sure Shot

Her father died when she was six leaving Annie’s mother to raise six small children alone.

Her mother remarried and her new husband died leaving her with another baby.

Annie was soon sent to the Darke County Infirmary where she was given an education and taught to sew—a skill she’d later use to make her own costumes. She would be sent to live with a horribly abusive couple she could only refer to as “The Wolves” before going back to the infirmary and then finally home to her mother when she was thirteen or fourteen.

Her mother had remarried again and now Annie used her father’s rifle to hunt and sell game to the local grocers for money. One of the animals she hunted at this time was the Passenger Pigeon, which went extinct from over-hunting. in 1914.

At the age of fifteen Annie paid off her mother’s $200 mortgage from her hunting.

It was from this skill as a shooter that she met her husband—competing against him in a turkey shoot (she got a perfect 25/25 while Frank received 24/25). They were married in 1876 (despite Annie’s family not approving—she was 17 to his 30).

Annie and Frank first appeared onstage together in 1882 after Frank’s partner was ill and Annie stepped in.

In March of 1884 Annie befriended Sitting Bull—leader of the Lakota Tribe. Sitting Bull and Annie became fast friends—he even adopted her into the tribe and gave her the name of Watanya Cicilla—Little Sure Shot.

In 1885 Annie and Frank joined Buffalo Bill’s Wild West Show. They would stay with the show for sixteen years and Annie took center stage with Frank retiring to be her manager behind the scenes.

They retired from the professional arena in 1913.

During both the Spanish-American War and World War I Annie volunteered to raise up a regiment of shooting women—the federal government declined her request both times. She volunteered for several veteran’s charities and the Red Cross instead.

In 1922 Annie and Frank were in a bad car wreck—dashing her plans for a comeback and starring in a major motion picture. Annie never fully recovered and after fifty years of marriage she passed away—with Frank following three weeks later.

Who Was Annie Oakley? By Stephanie Spinner

Women Who Charmed the West by Anne Seagraves

The Books linked above as well ^^

I first heard Annie’s story when I was seven or eight years old. She was the first woman from history to grab my attention and kept me hooked, all these years later. Without her, I might have never found Hypatia in a roundabout way or started this project all together. So, here’s to you Annie, and I’m sorry I mispronounced your name (Phoebe) for a solid three years before anyone bothered to correct me. It’s not phoh-bee, its Phee-bee, got it!