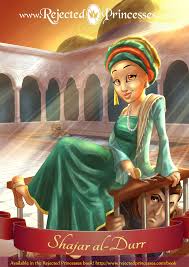 Shajar was the first woman in Islamic Egyptian History to become a Monarch (the second Muslim woman overall) and the first woman to rule Egypt since Cleopatra VII had died nearly 1,300 years before.

Shajar was born a slave and her name translates to String, Spray, or Tree of Pearls, depending on the source. What Shajar’s real name or ethnicity was is, as mentioned above, lost. She may have been Turkish, or even Armenian. *One source states she was born in present-day Armenia to Turkish parents.

She was bought by the son of the Sultan of Egypt who soon rose to become Sultan himself and he married her. They had one san together, but the heir was her husband’s older son. Shajar’s husband’s rise to the throne hadn’t been a straightforward shot, and after he became Sultan he had to fight off and conquer large swaths of enemies, including his uncle. All of this infighting within the Islamic world led to the kicking off of the Seventh Crusade, but this time, instead of targeting the Holy Lands, Europe targeted Egypt.

Shajar’s husband soon died right as the Seventh Crusade was really kicking off, which is just great considering it was his ruling tactics that had started the whole war in the first place. In order to keep up morale, Shajar told everyone her husband just wasn’t feeling well but in actuality she and his chief commandeer led the country to victory and captured the King of France (Louis IX) ransoming him back to his own country, for 30% of their total annual revenue no less.

After it came out Shajar’s husband was dead, her stepson become Sultan. However, her stepson wasn’t all that bright (he was a teenager after all) and after thoroughly pissing off all the courtiers, the slave-soldiers rose up and killed him leaving Shajar in charge instead.

Shajar legitimized her rule by having coins minted and everything. Unfortunately, after only eighty days of rule she was forced to step down because the Muslim Caliphate refused to accept a female ruler and the rest of the people under her command outside of Egypt were just as sexist.

Shajar also ended up marrying the new Sultan but things didn’t go well, and she and some servants killed the guy while he was taking a bath one night. Though the official reasons for why Shajar had him killed varied, one that stands out would be the fact he was planning on marrying a third woman. Shajar tried to regain her power after this, but the dead guy’s first wife seized control instead and had the servants beat Shajar to death with clogs…yes clogs, as in wooden footwear.

Legend says Shajar’s body laid naked in a moat for three days after the city’s peasants stole her fine clothes. Finally, someone took pity on their fallen Sultan and buried her. As is common throughout human history, Shajar’s story was purposefully omitted and forgotten about by historians. Her name was left off the official Sultan’s list. However, Shajar’s story was never completely forgotten thanks to local folklore and an epic poem. In the verse “Sirat al-Zahir Baybars”, Shajar is depicted as the daughter of the Caliph of Baghdad, who gives her Egypt to rule. In the poem she is killed after fleeing from her enemies and falling off a roof.

Today, Shajar’s bones rest in a mosque that was built and named in her honor.