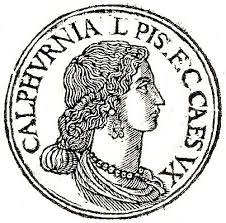 Though their wedding was for political purposes only at the outset, Calpurnia and Julius did grow to care for one another over time.

It is believed Calpurnia and Julius married around 59 BC, fifteen years before Julius’s assassination. She was either his third or fourth wife. However, by 53 BC, Julius was considering divorcing Calpurnia in order to marry Pompeia, the daughter of his political rival Pompey. For whatever reason, he decided against this course of action, and stayed married to Calpurnia.

Calpurnia is most remembered for warning Caesar not to go the Senate for fear of him being killed that fateful March day; but he ignored her and was in fact assassinated. They had no children together, and despite her having to know about his affair with Cleopatra VII, she remained loyal to Julius’s memory.

After his death, Calpurnia donated Julius’s private papers to Marc Antony, and backed him in the hopes Marc would avenge her late husband. Her loyalty to Julius ensured Calpurnia’s family would see their political ambitions realized and ensured for the rest of their lives.

Sadly, very little about Calpurnia herself survives today, including where, how, and why she died. One would think a figure as important to history as her would have more sources and documentation to follow her life’s path, but of course, what we want and the reality of the situation are not always the same thing.

From 2017 to 2019, a Canadian rock band that consisted of one of the Stranger Things actors, Finn Wolfhard, was named Calpurnia. Probably not the legacy our Calpurnia envisioned for herself.