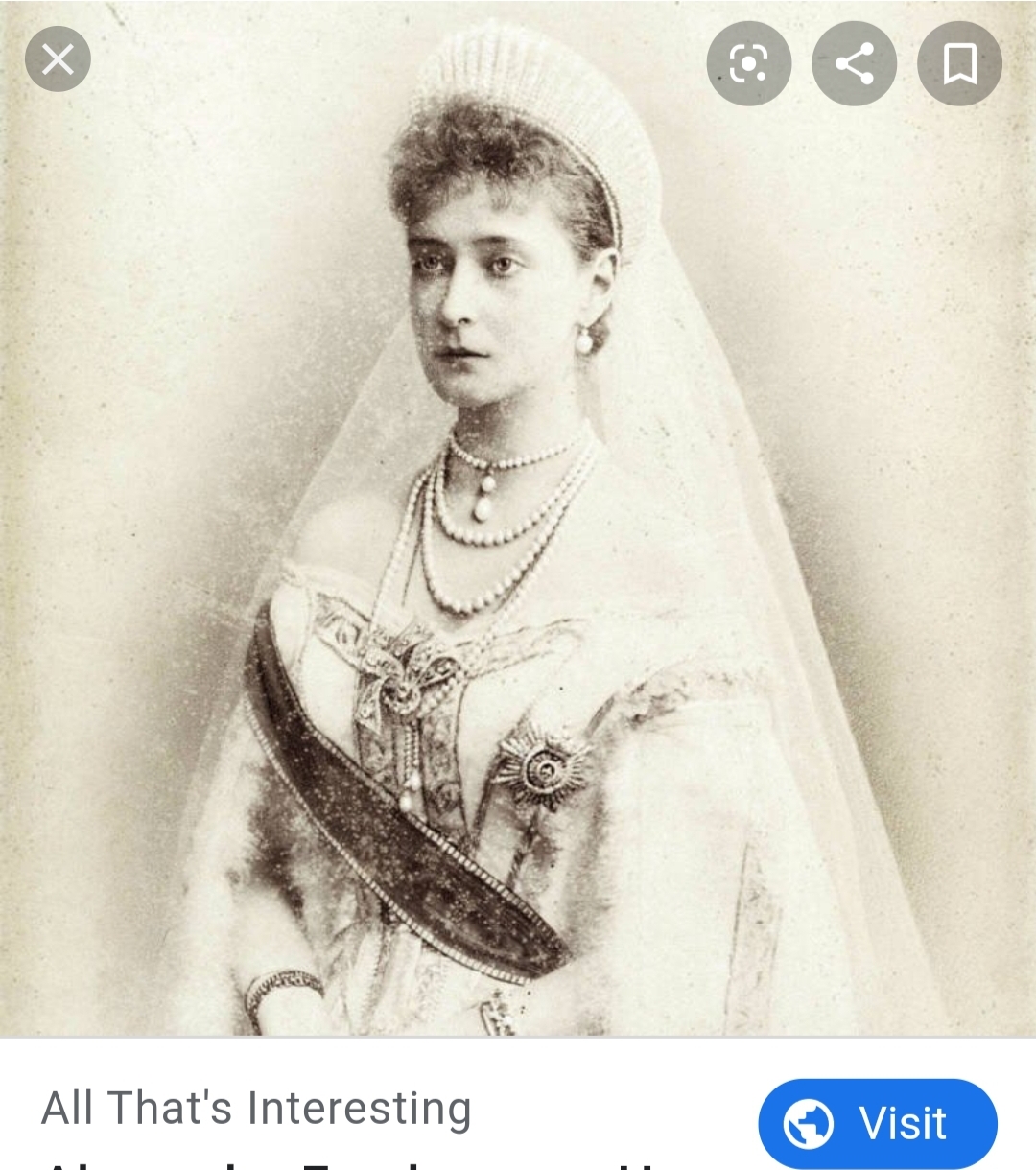 "Who is against us? Petrograd, a bunch of aristocrats playing bridge and understanding nothing. I have been sitting on the throne for twenty-two years, I know Russia, I have travelled around the whole place, and I know that the people love our family."

Alexandra was the mother of four daughters (Olga, Tatiana, Maria, and Anastasia) and one son (Alexei). She was the wife of Tsar Nicholas II.

Alexandra was also the granddaughter of Queen Victoria. Her own mother died when she was six, so she was raised primarily in England with her cousins.

It was suspected (though not proven until her son was born) that Alexandra carried the gene and would pass hemophilia on to her son Alexei. The royal families of Europe (of whom the vast majority were all intermarried with their own cousins) knew hemophilia was becoming an issue, but at the time they continued to intermarry anyway which only exacerbated the problem.

Alexandra met her future husband when she was twelve and they quickly formed a friendship and later relationship—primarily through letter writing seeing as he was in Russia most of the time.

Alix married Nicky (as he was known to his family) in 1894 and moved to Russia—adopting her new name and joining the Russian Orthodox Church. Alix had been refusing to marry Nicholas for many years, with one of the reasons being her devout faith to the Lutheran Church, but she finally acquiesced and became just as devout a follower to the Russian Orthodox faith.

Nicholas was twenty-six and Alexandra twenty-two when they married—neither of them having any idea how to run a country—which was to be their undoing seeing as Nicholas’s father had died just before the wedding leaving Nicholas in charge of literally one of the largest empires on the earth at that time.

In Russia at the time, only a male descendant of the Romanov familial line could inherit the throne; which quickly became a problem as Alexandra gave birth to four successive daughters in a row. Finally Alexandra and Nicholas were blessed with a fifth child, this one a son. Unfortunately as I already mentioned, Alexei was very sickly his entire life and spent most of his life being protected from harm at all costs.

The Russian public had no idea the heir to the throne and their future Tsar (or so they believed at the time anyway) had this deadly disease. But they weren't stupid either. Everyone knew something was up, and the forceful air of trying to cover up Alexei's illness was only one of the many issues Alexandra and Nicholas would face. But I'm getting ahead of myself a little here.

Alexandra made the decision to breastfeed Olga, her eldest, (and most likely the rest of her children as well) despite her grandmother’s misgivings and was particularly attached to her son Alexei—which was understandable as she constantly fretted over his illness.

Alexandra turned to Rasputin for help and alienated the public in the process. Rasputin was a mystic from Siberia who promised to help cure Alexei of his ailments through his mystic arts. Alexandra completely fell under his spell, but the peasant class and the aristocracy both became more and more fed up with her behavior.

By the time World War I broke out, there were multiple plans that had been talked about, but never implemented, to remove Alexandra and Nicholas from power. By that point, the Russian aristocracy, and the royal family's numerous cousins across the European continent, were becoming more and more frustrated and ill-at-ease with the Tsar and Tsarina. It was more than obvious to anyone who was in with the family that Nicholas was hardly anything more than a pushover who did anything his wife wanted, and Alexandra was a physically weak but still tempestuous autocrat.

Many relatives and other royals across Europe warned Nicholas Russia wanted and needed change. He received advice on everything from helping his country become more democratic and also reigning in his vastly unpopular wife, but Nicholas failed to pay any of the counsel any mind.

Nicholas would eventually fire the leader of the Russian armed forces, deciding to lead his armies from the front lines himself.  Meanwhile, Alexandra was back in her palace, sort-of running the country but also spending most of her time locked away in the palace. Her daughters languished within with nothing to do, while her son became the focus of many of the plots to overthrow the Tsar and Tsarina.

Rasputin was assassinated in 1916, and for a time revolutionary ideas cooled in the country. However, Nicholas and Alexandra's harsh punishment on Rasputin's murderers would alienate much of the aristocracy once more. By the next year, Nicholas had no choice but to give up the throne, becoming the last Romanov to rule Russia after over three hundred years of rule.

After Nicholas's abdication, the royal family lived under house arrest for two years. During that time, the entire government of Russia was overhauled, from an autocratic royal head of state to a new Communist regime, known today as the Bolsheviks.

At first, the royal family were held under house arrest but still had several creature comforts, but that would change. By 1918, the White Army (those Russians who wanted to see a return to royal rule) were closing in, and the Bolsheviks decided the royal family were expendable after all. They had to be done away with before any of them had a chance to reclaim the throne.

The royal family and their loyal servants were living in the Ipatiev House in Yekaterinburg in July of 1918. The Romanovs had started to think there was a chance they would be rescued, and the girls had started to sew their precious jewels into the lining of their dresses. And so on the night of 16/ 17 July, when the family were roused from their beds and told they were being moved for their safety, Alexandra and her daughters dressed in those jewel encrusted gowns.

The seven family members (Nicholas, Alexandra, Olga, Tatiana, Maria, Anastasia, and Alexei) were led into a basement with four of their servants. After requesting chairs, Alexandra and Alexei were allowed to sit. Then one of the Bolshevik revolutionaries came forward and informed Nicholas he and his family were to be executed.

Alexandra and Nicholas's downfall had come after repeated warnings from their family and those closest to them, but unfortunately the couple had decided they knew what was best, until it was too late to turn back and try to do things over.

Alexandra and her husband died in the first volley of bullets—unfortunately her daughters were not so lucky. Because the girls had been wearing their jewel-encrusted, practically bullet proof vests, they survived the initial round of shots. The girls were all clubbed and bayoneted until they finally, mercifully died.

When the family disappeared in 1918, the world suspected the worst but had no idea what had actually happened. By then, the world had been waiting for news of Nicholas's death, but they weren't suspecting the eradication of the entire family. The Bolshevik leaders did everything in their power to cover up what had happened, including moving the bodies to multiple locations, coating them in acid, and in the case of Alexei and Maria, burning them with fire and dismembering them.

In 1976, Alexandra’s and the bodies of Nicholas, Olga, Tatiana, and Anastasia and the four servants were uncovered, but then quickly reburied for fear of what the Communist Regime would do if they learned the remains had been rediscovered. After the fall of the Soviet Union, the bodies that had been located were reburied in an elaborate funeral; however, the bodies of two of Alexandra's children—Maria and Alexei, which were found separate from the others several years later, remain in cold storage as of 2020 thanks to the urging of the Russian Orthodox Church (Click on Maria’s profile to learn more).

The Tsar and his Family have all been made Saints in the Russian Orthodox Church.

Caught in the Revolution: Petrograd, Russia, 1917--A World on the Edge by Helen Rappaport