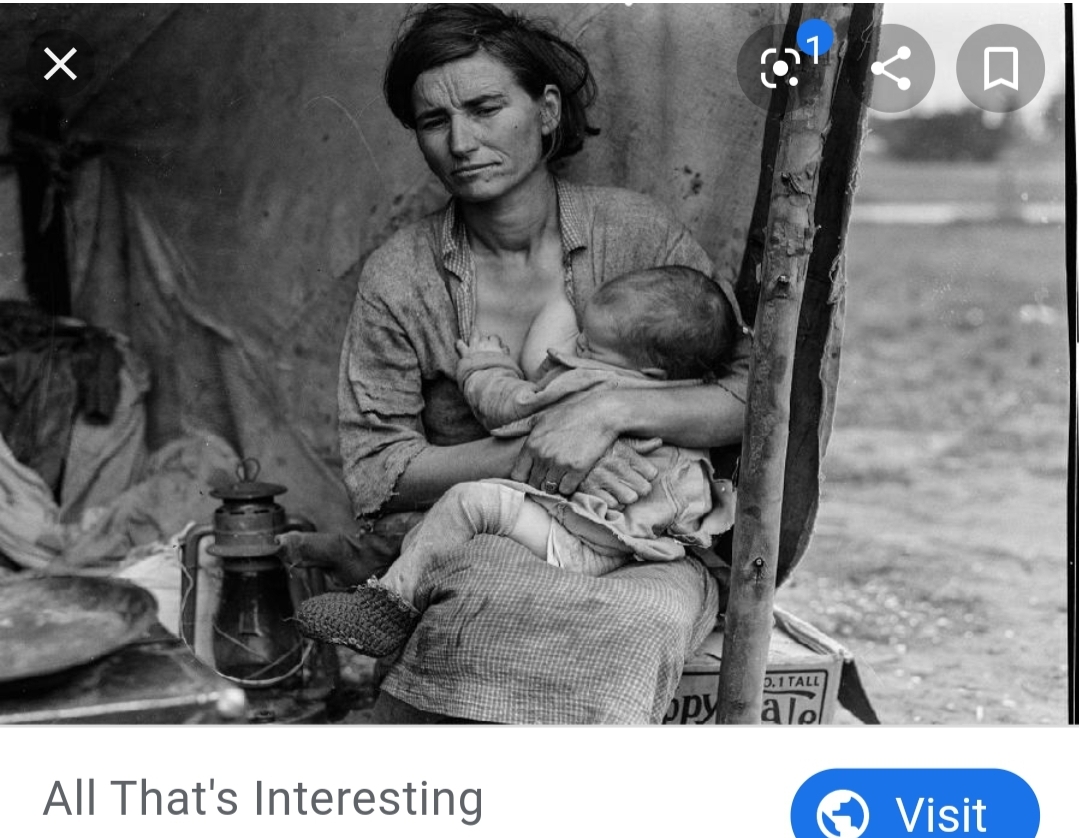 This photo is not considered the iconic "Migrant Mother" photo, but was one of the six taken by a Federally paid photographer that day in 1936

“We just existed...We survived, let’s put it that way.”

Florence was the daughter of Cherokee Native Americans and was born in the former Indian Territory a few years before Oklahoma became a state.

Florence had ten children total, but only seven at the time when the now-famous photographs were taken (the images are so iconic in fact, that when Googling "Great Depression" at the time of writing this article, Florence's image is the first that comes up on Google Images). Florence's first six children were from her husband who died of Tuberculosis during the depression, and her last four were born out of wedlock. Those last four children were from boyfriends she had during the Depression years.

Florence and her boyfriend worked whatever agriculture jobs they could find in California and Arizona. Florence claimed she was able to pick between 450 and 500 pounds of cotton a day and earned fifty cents for every hundred pounds picked. While the pictures are known today as a representation of the Dust Bowl and the hardships it created on farmers in the Midwest, its important to note that the subject of the photos was not actually effected by the Dust Bowl. By the time the pictures were taken in 1936, Florence and her family had been living in California for around ten years.

Despite promising not to distribute the pictures, the photographer immediately registered and sent photos to newspapers across the country. “Migrant Mother” first appeared in a San Francisco newspaper in March of 1936, and today is recognized as one of the most iconic photographs in American history. Despite this, Florence never received a penny from the pictures. Days after the photo spread across the country, the US government announced it was sending 20,000 pounds of foodstuffs to the migrant workers camp where the photos had been taken. Unfortunately, Florence and her family had already moved on by that time.

When asked about the pictures in 1960, the photographer provided the following information about the subject of the photo:

“[The Photographer] didn’t ask the woman’s name, or find out her history. She claimed the woman told her she was 32, that she and her children were living on frozen vegetables and birds the children had killed, and that she had just sold the tires from her car to buy food,” (Courtesy of the History article linked below).

Florence hid her identity as the Migrant Mother until 1978. That year, Florence wrote a letter to the local newspaper claiming she was the woman in the photo, and that she wanted her story to be heard for the first time. Florence and her children went on to claim they felt exploited by the pictures and resentful of the photographer’s characterization, or lack thereof, of their family.

The day the pictures were taken, Florence’s two oldest sons were in town repairing their car. One son, Troy, would publicly deny the photographer’s claim that the family had sold the car’s tires for money to buy food. The family didn't have much, but they were together, and that was enough.

After World War II, Florence settled in Modesto and married a hospital administrator. Five years after publicly claiming she was the subject of the Migrant Mother photos; Florence was living alone in a trailer and suffering from numerous health issues. Her children asked for help from the public, and thousands of letters poured in offering support. Their was also, reportedly, between $15,000 and $35,000 in donations as well (sources differ on the exact amount).

When Florence died, she was honored and remembered across the country and the world. Even the President of the United States, Ronald Reagan, said, “Mrs. Thompson's passing represents the loss of an American who symbolizes strength and determination in the midst of the Great Depression.” Her epitaph on her headstone reads, “Migrant Mother—A Legend of the Strength of American Motherhood.”