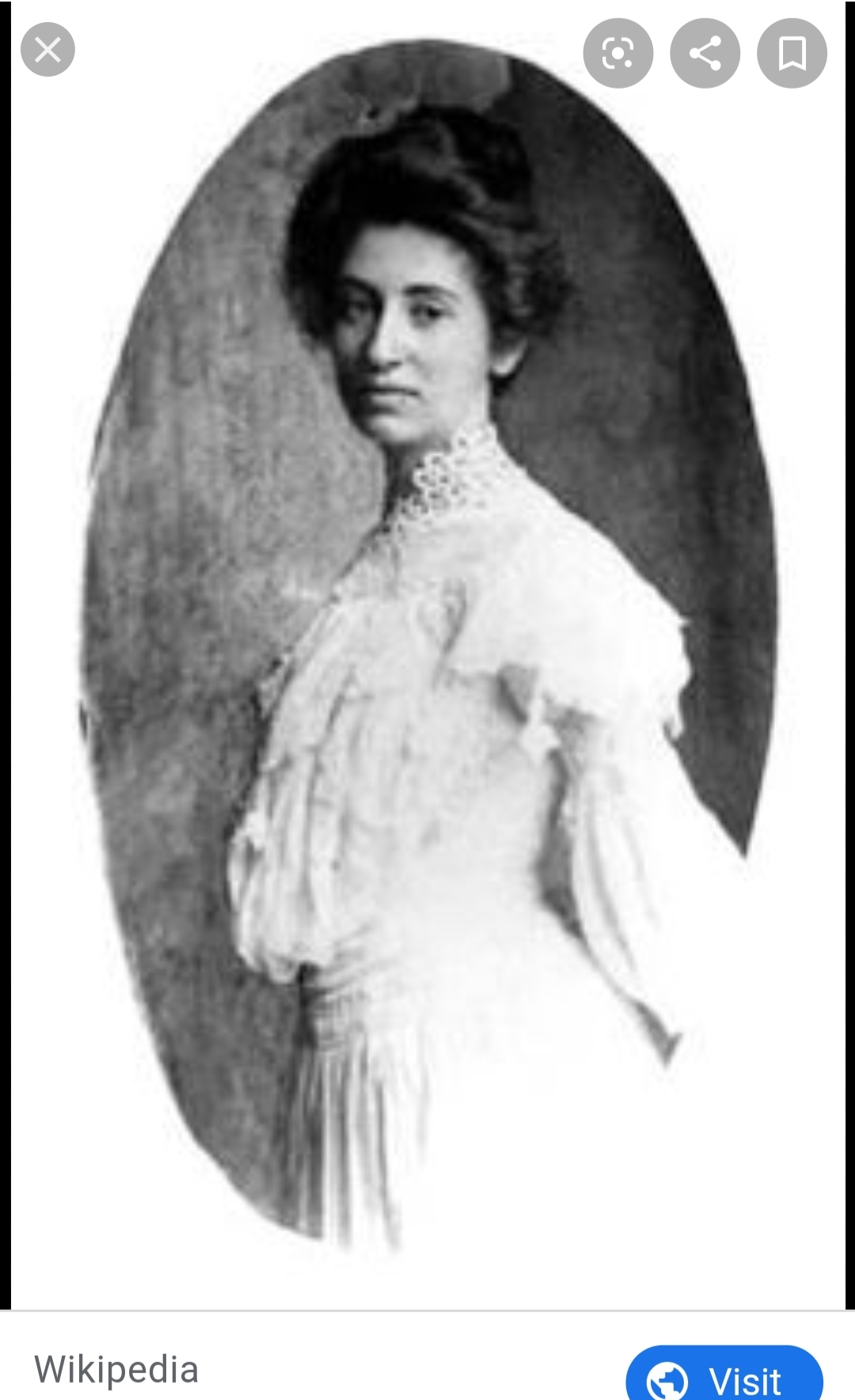 “I have always longed to carry out the true Indian idea, to plan a hotel strictly Indian with none of the conventional modern motifs.” 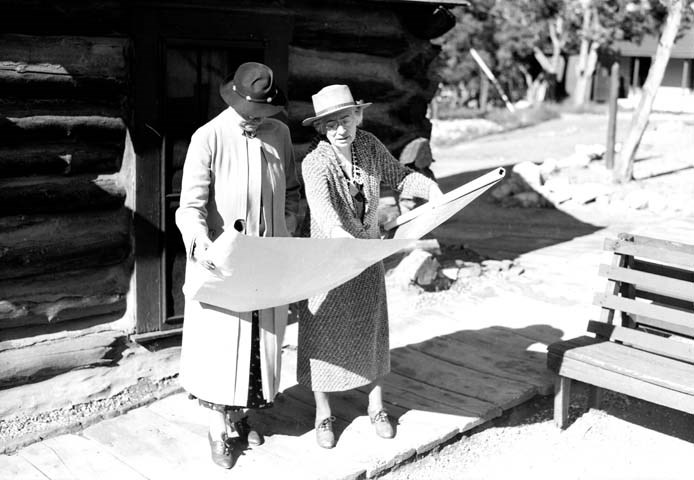 Mary Colter holding what suspiciously appear to be blueprints on a job site (sarcasm explained under the "Note" heading at the bottom of the article). Courtesy of the National Parks Service

Architect and Interior Designer in the Southwestern United States

Mary is most known today for having created Hopi House at the Grand Canyon. Her other projects at the canyon include Hermit’s Rest, Lookout Studio, Desert View Watchtower, Phantom Ranch, and the Bright Angel Lodge.

Mary attended the California School of Design, where she grew her already budding design skills. Mary also earned an apprenticeship with an architectural firm where she learned how to create architectural work herself. She graduated from the school in 1891, but returned to Saint Paul, Minnesota, to be with her family and begin a career in teaching. Within four years, she had transitioned to working as a drawing instructor at an art-based high school.

In 1902, Mary was hired to design the interior of a building adjacent to the famous Alvaredo Hotel in Albuquerque, New Mexico (the hotel has since been demolished). This was her first project with the Fred Harvey Company, where she would stay working for the next forty-six years. During that time, Mary would design twenty-one more structures for the Fred Harvey Company along one of the major routes of the Atchison, Topeka, and Santa Fe Railroad line.

Mary’s work is even more remarkable given her unique approach to the entire process. Her works are an homage to Native American culture of the Southwest, and she did more than just include imagery and artifacts. Mary employed as many Native American workers as she could and used local materials as well. Mary made sure to research the tribes and their way of life before randomly including things too, so that her work was respectful, tasteful, and a perfect embodiment of the American Southwest.

She retired ten years before she passed away.

While in the process of writing this short biographical page, I came across a self-published book on Amazon entitled False Architect, which evidently sets out to “prove” Mary Colter was a fraud and that before she died she came up with a conspiracy to steal credit from other designers and architects for the buildings she is credited with today.

If you just rolled your eyes, don’t worry, I’m in the same boat. However, I felt I better include at least an acknowledgement that the book exists here so no one could accuse me of ignoring the claims put forth in the book.

Now, I obviously haven’t read the several-hundred-page long work by a man who evidently doesn’t have any actual historical training (an article about the book put out by Route 66 News literally describes the author as a banking executive from Chicago). The book apparently is three quarters him making claims and one quarter listing several hundred sources and citations to back up his claims, most of which he uncovered by looking at the internet. Ah the internet, where everything must be true.

Now, in the Route 66 News article about the book (which I will link below), they go over several of the claims put forward in the book. The very first claim is that Mary couldn’t have designed any of the buildings on her own because she didn’t have any architectural training—which is funny considering the sources I all easily found noted she had taken an internship at an architectural firm while attending art school; including in several pages put out by the National Parks Service themselves (but you have to ignore that because the NPS is working to actively cover up the truth).

The next claim is that Mary couldn’t have designed the Alvarado Hotel in Albuquerque because she hadn’t been employed by the Fred Harvey company until after the hotel was built (all within the span of the year 1902). So this one might have some validity. A few sources state Mary was the designer of the hotel--HOWEVER--the National Parks Service disagrees. They state (as I also stated above, in this article) that Mary designed the interior of a building adjacent to the already existing hotel. There, easily cleared up! In any case, the hotel was demolished in the 1970’s so it doesn’t really matter at this point anyway.

The claims continue that Mary couldn’t have designed the buildings at the Grand Canyon because…well…well one of the buildings was again built “before” she was hired by the Fred Harvey company (like the Alvarado Hotel listed above), but the other buildings can’t be proven or disproven definitively at all because the only surviving blueprints for them are unsigned. It’s the Chicago banker’s opinion that the blueprints are similar to other male architects at the time, so he thinks this means Mary didn’t design them. Which is again funny, considering there are actual photos of Mary on building sites, holding blueprints or big rolls of paper that look conspicuously like blueprints (in my opinion), and people who worked on the projects at the time gave accounts during that same time period attesting to Mary working on the buildings.

The article goes on from there, claiming Mary claimed credit for a design only for the building to be subsequently demolished, or for more design work to be done on it clearing away the old. According to the Route 66 News article, the Chicago Banker states Mary was only able to get away with her lies because the majority of the people she worked with at the Fred Harvey Company died before World War II. Okay, but she didn’t stop working for Fred Harvey until 1948—which is three years after the war ended, and obviously not every single person she worked with died before the war ended. To be fair, evidently he claims only the "higher up" executives at Fred Harvey had died, but really, all of them? And all the other people who worked for the company around that time who worked with Mary and other architects all jumped aboard the train of allowing Mary to take credit for work that wasn't hers? I'm sorry, but that seems highly improbable to me.

And if all that isn’t bad enough; Mr. Banker Man finishes his book by “theorizing” (which is a fancy word for claiming without actually using the word claim) that Mary suffered from Narcissistic Personality Disorder or some other form of mental illness, possibly senility as well. Wow, that’s—well that’s polite to say the least [sarcasm]. Evidently as soon as you get into your eighties you can no longer remember what you’ve been doing the last fifty years of your life. And to further back up his claim (I’m sorry, “theory”) Mary’s father reportedly died in an insane asylum so you know, all that mental illness running in families, or something. As someone who has a long history of mental illness in my own family, that particular claim (I'm sorry, "theory") is honestly more offensive than any of the others. You can't just assume someone had a mental disorder because one of their parents died in an insane asylum.

Honestly my favorite part of all this is the inclusion in the Route 66 News article of an email sent out by the co-owner of one of the hotels the Chicago Banker claims Mary didn’t actually design. The excerpt from the email reads [my italics and coloring for emphasis]:

“The attributions of Colters works to Curtis and others is preposterous, and obviously discounted by the many including Harvey family with direct knowledge of Colter and the buildings. We have collectively decided it best to ignore these self published rantings and not give Shaw a podium for his hatred.”

The aforementioned owner also included another email from Mr. Chicago Banker. Apparently, he’s decided to compare a woman who runs a Fred Harvey/Mary Colter fan page on Facebook to Communist dictators Stalin and Mao and that those who refuse to believe Mr. Chicago Banker man are “Afraid of the truth.” You can tell the guy is also highly uncomfortable with anyone critiquing his work by glancing over the reviews and information about his book on Amazon. For one thing, he is this close to threatening readers by saying he dares the reader to find proof his claims are false, and that he’ll give them their money back if they don't like the book (that's a relief, don't want any of you throwing away $12.95 for nothing). Then he evidently deletes reviews he doesn’t like; one poor woman named Ofelia has been on the wrong side of his wrath for some time now. Ofelia claimed she read the entire book and didn’t agree with him; so, Mr. Chicago Banker literally dared her to meet him in Santa Fe so they could publicly debate the book. Wow. He also offered a $10,000 reward to anyone who could prove Mary built certain buildings, but conveniently only left the reward open for a few months before letting it expire.

So, what have we learned? Well, not to sound like a preachy feminist, but I honestly believe Mary was very influential in many buildings with the Fred Harvey Company. She definitely did most of the interior design work, no one seems to be claiming otherwise, but this one random guy made it his personal mission to take out a vendetta against a woman who had already been dead for sixty years by the time he published. Now I’ll say it right here and now, if someday someone is able to definitively prove this guy’s claims, I’ll apologize and correct my article. But the fact that the two historians questioned in the Route 66 News article refused to say they agreed with or endorsed his work, that people who are closely associated with the Fred Harvey Company disavow it, and that most of the buildings in question are long gone makes me wonder what this guy’s problem is. No matter what the “truth”, what Mary accomplished is remarkable, and she’ll always be remembered for her pioneering work in the field. Not even a self-published weirdo from Chicago can take that from her.

Arizona: A History by Thomas Sheridan