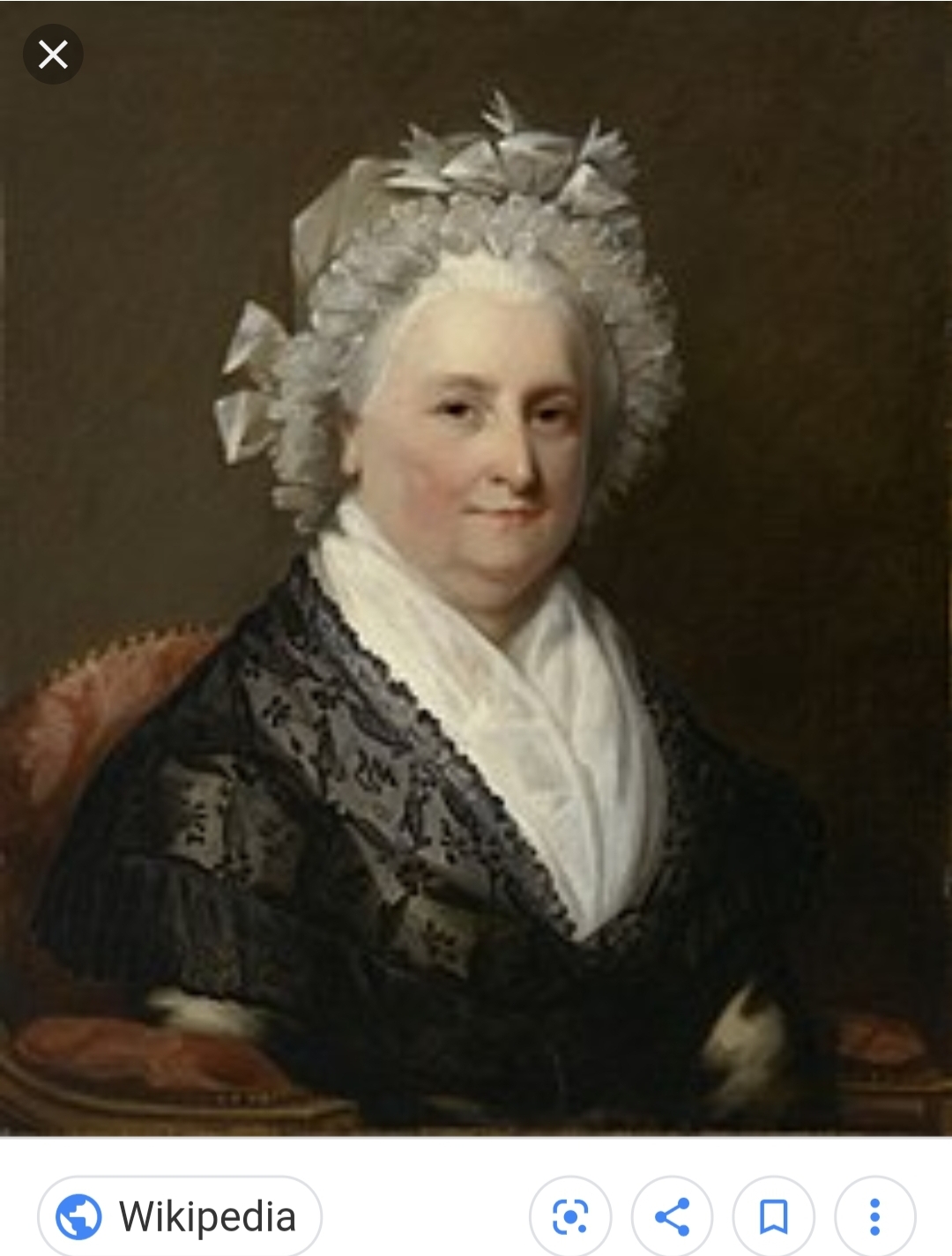 "I live a very dull life here...indeed I think I am more like a state prisoner than anything else," -Martha on her time as First Lady

She was the first First Lady of the United States.

Martha would have four children with her first husband all of whom she would outlive (two died as children the other two as adults).

Martha was raised on a wealthy plantation and received a fair education as a child. Her first husband was twenty years her senior when they wed when she was eighteen. He died after seven years of marriage leaving her with two very young children, three hundred slaves, and a 17,500-acre plantation to care for.

Martha fell quickly for the slightly younger George and at first, he found her attractive (by looks and wealth) and married her after his real “crush” married someone else.

The marriage changed George from a non-commissioned member of the militia to a wealthy landowner and respectable gentleman in society.

Martha, George, and the children would move into the refurbished house at Mt. Vernon soon after. The children were educated with a private tutor though when Patsy was twelve, she suffered an epileptic seizure and had to stop her studies. Patsy died at the age of seventeen and Jacky (Martha’s son) married soon after.

When the rumblings of rebellion were first sparked Martha was torn—many of her friends and neighbors (and her son’s in-laws) were loyalists and yet George was an ardent supporter of Independence.

Once George was named Commander in Chief of the Continental Army the couple would be separated for months at a time by the war.

During this time Martha urged her family to get inoculated against smallpox, a radical new medicine that was unprecedented for its time. And what do you know, no one in her family died from smallpox!

In 1781 her son Jacky got restless at home and enlisted in the army—and then promptly died a few days after enlisting from Typhus leaving Martha distraught. By the time Jacky died he and his wife had had six children (two of whom were twins that died at birth).

When the war ended George resigned his commission and made it home on Christmas Eve.

Though their mother would remarry Martha’s grandchildren remained at Mt. Vernon to be raised by her.

When the first family moved to New York (The United States’s capitol at the time) the grandchildren went with for George’s term as President.

George died in 1799 and Martha was left in charge of the plantation of Mt. Vernon.

Most do not understand that she was much richer than her husband and so most of their property was actually hers upon his death—meaning he had no legal right to free any of her slaves.

Luckily, she freed them herself in 1801 (for more on their relationship with their slaves look at Ona Judge Staines). Apparently she did it out of fear they would kill her, but she freed them* all the same.

*By them, I mean the Washington slaves—the 123 owned by George before his death. Martha could not legally free the slaves owned by the Parke-Custis Estate (remember the three hundred I mentioned at the beginning of the article?). These slaves were passed on to her four grandchildren.

In the days leading up to her death Martha would burn all but two of the letters she and her husband had exchanged over the years.

Women in the American Revolution by Jeanne Munn Bracken