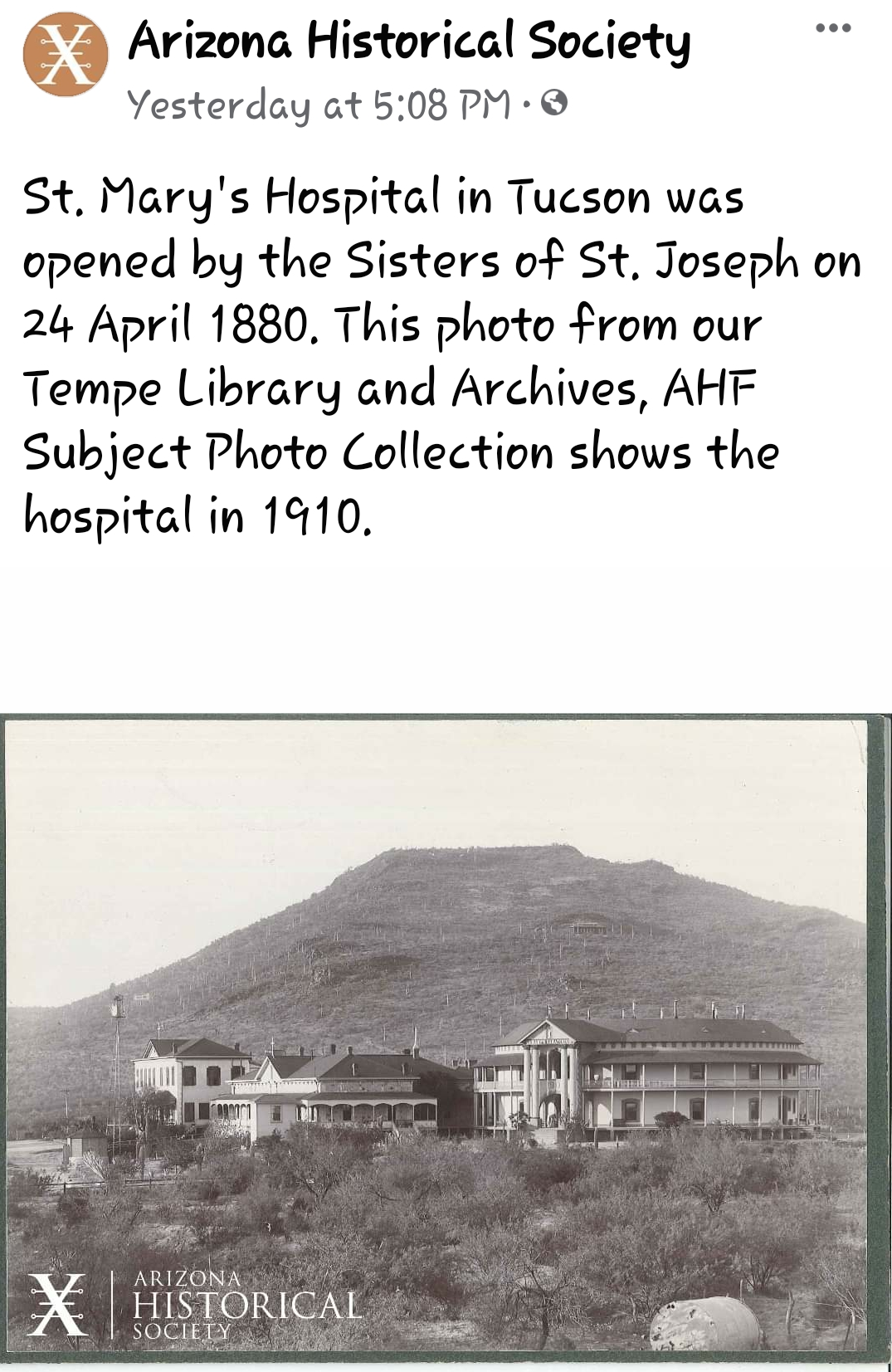 She served in Arizona for thirty-seven years, including as Mother Superior and president of St. Mary’s Hospital for twenty-eight years. St. Mary’s first opened in 1880 and was Arizona’s first hospital. Located in Tucson, the hospital originally housed room for twelve patients and was sold to the sisters on the condition it remain in operation as a hospital for the next ninety-nine years. The hospital remains open today.

When Mother Fidelia took over the hospital it was a small one room building with a ground floor and a basement. By the time Mother Fidelia left in 1920, the hospital had expanded to several buildings with enough innovations the complete list of them all is several pages long (one of the sources I've linked below actually goes into the timeline of how the hospital has changed over the years).

Though there were several nuns on staff, there was also no place for the sisters to live on site in the early 1890's. Mother Fidelia rectified this by immediately requesting the construction of a living quarters for the nuns on the hospital property. The old adobe building they used to live in was converted to an orphanage.

Next, Mother Fidelia decided the hospital needed a separate building to house patients in need of isolation if they were suffering from infectious diseases (the number of tuberculosis patients had skyrocketed in Arizona around that time). A large four-room building was created specifically for this task.

With the isolation building complete, Mother Fidelia also opened a surgical wing with sterilization areas and an attached emergency room—in 1903! The new section of the hospital even included a place to tie up horses that were used for ambulance services at the time. That same year Mother Fidelia also added an ice room to provide a way to cool patients in the summer heat. Three years later she added a heating system for the cool winters. In 1907 the hospital even received electricity; their first electric bill was $19.40. By that point, unfortunately, the hospital was also $12,000 in debt. Ten years later, continuing to push forward, Mother Fidelia also oversaw an X-ray room being added to the ever-expanding hospital.

Mother Fidelia insisted a separate building be created specifically to teach nurses. At the time, nurses were usually trained while on the job, and an actual school for nursing was practically unheard of. The first student nurses arrived in 1914; unfortunately, the graduates could not be licensed to practice as nurses in the state because there were no laws in the state providing for nurses at the time (give us a break, Arizona was literally two years old at the time!). Luckily, in 1921, legislation was passed allowing for nursing graduates to become licensed to practice in the state.

Even more impressive than the fact the first nurses enrolled in 1914 is this—the first national curriculum to teach nursing in the United States wouldn’t even be published until 1917. Basically, Mother Fidelia was ahead of her time in all aspects of her management of the hospital.

In 1920, Mother Fidelia was reassigned to a new post in Los Angeles. She died there, three years later. Very little is known about her personal life outside her work with the order.

I haven’t been able to track down a photo of Mother Fidelia, but I have found an old photo of St. Mary’s hospital, posted courtesy of the Arizona Historical Society.