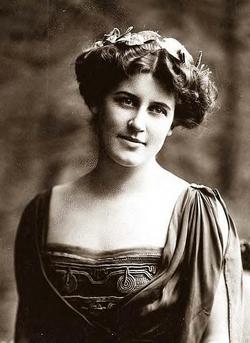 “Mr. President, how long must women wait for liberty?”

Literally Campaigned Herself to Death for the Cause of Suffrage

Inez was a labor lawyer and suffragist in the United States. Though hardly remembered today, in her own time Inez was known for leading the 1913 Suffrage Parade in Washington DC. The parade, spearheaded by Alice Paul, was the first protest of its kind to be seen in the nation’s capital.

Inez was raised in an affluent Brooklyn family, and split her time between the United States and London, England. While in the UK, Inez first became acquainted with the more-militant faction of the British Suffrage movement (known as Suffragettes). Inez was inspired by their protests and became a political radical herself.

Okay, now back to Inez.

Inez attended school at Vassar College. While there, she became involved in the suffrage movement after learning the very topic was banned from speaking on campus. Inez defied the rules by hosting suffrage discussions at the local cemetery nearby. She graduated from the college in 1909.

That same year and the following, Inez was arrested multiple times for joining pickets and strikes in support of women’s labor rights. Since she had money, Inez also contributed to the cause by paying bail for other activists who’d been arrested.

Because of her unfortunate birth defect (being born a woman—that’s sarcasm by the way), Inez was rejected from several law schools. Finally, in 1912, Inez was able to graduate with a law degree from New York University. She had officially jumped from public nuisance (from the perspective of the factory owners in any case) to powerful advocate who could fight for her fellow women with that much more power and might. By the way, Inez didn't just support women in these endeavors. She supported the rights of all laborers and those down on their luck do to economic hardships; she's just better known for her supporting women.

The following year, Inez rode astride the horse Grey Dawn as she led thousands of women down Pennsylvania Avenue in the first organized march on Washington. Inez was supposed to represent the New Woman of the twentieth century, and she did just that.

After the parade, Inez continued her advocacy work in both the United States and overseas. She also met a man while onboard a ship to visit Europe. Before they’d even docked, Inez proposed marriage. The man agreed and was an ardent supporter of her suffrage advocacy.

Inez’s attention pivoted away from suffrage somewhat as she began to openly ask for peace in Europe. Unfortunately, her wishes would go unrealized, and World War I broke out in 1914.

The War to End All Wars, as it was known at the time, directed attention away from Women’s Suffrage. The women in the United Kingdom put down their signs and picked up their Red Cross aprons; deciding the preservation of their nation and way of life was more important than voting rights at that window in time.

However, women in the United States had a slightly different point of view. Seeing as the Americans didn’t immediately jump in to join the fighting, the American suffragists continued to push for their rights. On the frontlines of this battle was Inez.

In 1916, despite the fact she’d been suffering poor health for quite some time, Inez began a tour of the Western United States. She went by train and gave numerous speeches at each stop; each time asking for more support and donations for the cause.

Inez was onstage, in the midst of an impassioned speech in Los Angeles on 22 October 1916. One second, she was pleading for women’s rights, and the next she’d collapsed to the stage. Inez died a few weeks later in the hospital. She had literally campaigned herself to death for the cause, and still died four years before suffrage was gained on a Federal Level.

Inez’s memorial service, held at the Washington DC Statuary Hall at the US Capitol, was the first for a woman ever held at that site.

After her death, Inez’s sister stated her last words were, “Mr. President, how long must women wait for liberty?” Whether or not the words were actually spoken by Inez in her last moments of lucidity or not, they became a rallying cry for the Suffragists.

When Alice Paul and the Silent Sentinals began to stand outside the gates of the White House, one of their most famous and frequent signs was emblazoned with Inez’s words.

In 1921, a statue depicting the original suffragists (for the United States anyway) Elizabeth Cady Stanton, Susan B Anthony, and Lucretia Mott was dedicated at the US Capitol. The statue was only on public display a few hours (or weeks, depending on the source) before it was hidden away in the basement. Finally, in 1997, groups of supporters across the country raised the funds needed to bring the statue out of the crypt and put on public display in the Capitol Rotunda at long last.