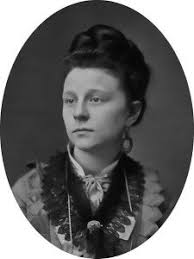 “The President is Shot!”

The ticket I received when visiting Ford's Theatre.

She Didn’t Know it at the Time, but President Lincoln Wasn’t the Only Victim in the Box That Night

Clara and her fiancé were the guests of Abraham and Mary Lincoln that infamous night at Ford’s Theatre. Sadly, for Clara, her fiancé (later husband) suffered from mental illness. Clara would not escape her second brush with death.

Clara and Henry (her fiancé, later husband) weren’t even supposed to be in the presidential box that night. The original guests would have been future President US Grant and his wife Julia, but they canceled only hours before the curtain rose. Several others also canceled (one source states at least four others), and at the last-minute Mary Todd invited Clara, whom she had become friendly with through the Washington DC social scene.

Clara’s father was a Senator from New York state. Her mother died when she was a young teenager, and her father remarried a woman named Pauline Rathbone. Pauline had children as well, including a son named Henry. Though Clara and Henry were technically stepsiblings by their parents’ marriage, Clara and Henry fell in love and became engaged to be married anyway. They didn’t grow up together, if that’s what you’re thinking. Henry’s biological father was seventeen when he died and so, by today’s standards anyway, Henry was already an adult by the time his mother married Clara’s father. That makes his and Clara’s situation a little less odd; a little.

Henry’s mental illness first began to appear while he served in the Union Army during the War Between the States. Henry was present for some of the worst battles of the war, and some believe his Post Traumatic Stress Disorder was exacerbated by his memories of the war. Matters did not improve when Henry was severely wounded during the Presidential assassination. After Lincoln was shot, Henry tried to interfere. John Wilkes Booth stabbed Henry, dragging the knife from Henry’s shoulder down to his elbow, severely wounding him. When John went to make his escape attempt, Henry called out, “Stop that Man!” at the same time Clara screamed, “Won’t somebody stop that man? The president is shot!”

After Abraham Lincoln’s wounded body was moved across the street, Clara remained in attendance throughout the night until he passed the next morning (according to some sources, others state she went home with Henry—more on that in a second). Henry was returned to Clara’s home after he collapsed from blood loss. He was lucky to survive the night, the knife wound coming within inches of a major artery in his arm that would have certainly caused him to bleed out entirely had it been severed.

Trying to put the night behind them, Clara and Henry married two years later and had three children. Though he resigned his Army commission in 1870 and never had regular work after, the Rathbone family remained affluent thanks to an inheritance Henry received from his late-father’s estate.

Unfortunately, Henry’s mental health continued to decline. He believed the horrid gossip people were saying about him, that he should have done more to prevent the assassination. Survivor’s guilt gripped him like a vice. His paranoia growing, Henry eventually concluded Clara was going to leave him and take the children. One source mentions Clara had brought up the idea with her family but decided against it because of the stigma attached to divorced women of her day, but none of the other sources state either way what she was thinking at the time.

After moving to Germany, Henry’s mental health finally snapped. Just before Christmas, Henry shot Clara dead and stabbed himself several times. Clara had just enough time to get the children behind a locked door before Henry shot her twice and then stabbed her multiple times as well. According to two sources, Clara’s sister was living with the family at the time and served as the children’s nanny. One of those sources goes on to state Clara said to her sister, "Lock the door and save the children; there is going to be dreadful work,” after she discovered Henry armed with his knife and gun.

A few minutes later, Clara’s sister and her children heard the screams and gunshots. Clara’s sister rushed into the bedroom to find Clara dying. This same source as I’ve mentioned above (From the Assassination of Abraham Lincoln website, linked below) claims Clara’s last words were, "He has killed us both at last."

Henry survived the suicide attempt and was later declared insane. He spent the rest of his life in an asylum. After his death, he was buried beside Clara in Germany; though tradition in the country dictated their bodies were eventually moved and "disposed of" after they failed to receive visitors for many years.

Find a Grave backs this tidbit up, claiming Henry and Clara’s graves were reused in 1952.

Their children were sent back to the United States after Henry was committed. The three children were raised by one of Clara's brothers.

Clara’s oldest son believed a curse had fallen on the family, and he knew why. The bloodstained dress Clara was wearing the night of the assassination remained in her possession. The dress had taken on mythic proportions after John Wilkes Booth fired his pistol. Though the blood on the dress was not from the president (not the majority of it anyway), Mary Lincoln was still reported to have screamed when she saw Clara later that evening. Mary reportedly shouted, “Oh, my husband’s blood, my dear husband’s blood!” Most of the blood on the dress actually came from Henry’s arm wound, but the sentiment was the same either way. It didn't help that the dress was white, allowing the red stains to show up even better than if the fabric had been another color.

One source says Clara later posed for a photograph with a famed photographer of the era while wearing the dress, but none of the other sources mention this. In any case, yes, Clara hung onto the dress. She didn't feel it would have been appropriate to have the dress cleaned so she could reuse it, but Clara also didn't feel like disposing of the dress either.

Eventually, Clara had the dress bricked up in a wall, reportedly after she saw Abraham Lincoln’s ghost. After her own death, guests of the home reported seeing both Lincoln’s specter and the apparition of a woman in a blood-soaked gown sobbing uncontrollably. Others said they would hear a gunshot every year on the anniversary of Lincoln’s death.

In 1910, Clara’s son had the dress dug out of the wall and burned, claiming all it had done was curse the family. He went on to become a member of the House of Representatives and proposed Ford’s Theatre be turned into a museum. His hope came true. Visitors to the theatre today see it exactly as it was the night Lincoln was shot.

When I visited the theatre in 2015, I couldn’t make myself climb up to the opposing balcony to look at the president’s box. I didn’t know Clara and Henry’s story at the time, but to me the very atmosphere of the theatre and the house across the street where Lincoln died was, well, creepy. You can still feel the sadness and heavy emotions in the air. President Lincoln’s assassination was tragic because of the death of the president yes, but it was also unexpected (he was the first US president to be assassinated) and it proved that the United States and the former Confederate States were far from being reunited happily.

Did John Wilkes Booth know, the night he shot the President, that he was actually destroying the lives of all four of the people in that box? I doubt it. But his actions did ensure that came to be. Mary Todd herself was committed to an asylum, by her own son, and she died a broken and sad woman, never able to overcome the deaths of her husband and three of her sons. Clara was murdered in a manner eerily similar to the way the president had died. Henry spent the last twenty-eight years of his life in an insane asylum, claiming the other inmates were trying to kill him and suffering intense hallucinations.

I would argue the United States has never fully healed from the effects of that one shot, the night of 14 April 1865. Only time will tell if the country grows closer or is pushed further apart. One thing is for sure though, Clara’s story is proof that a single moment in history can affect the lives of anyone, even an innocent bystander that should have never been there in the first place.