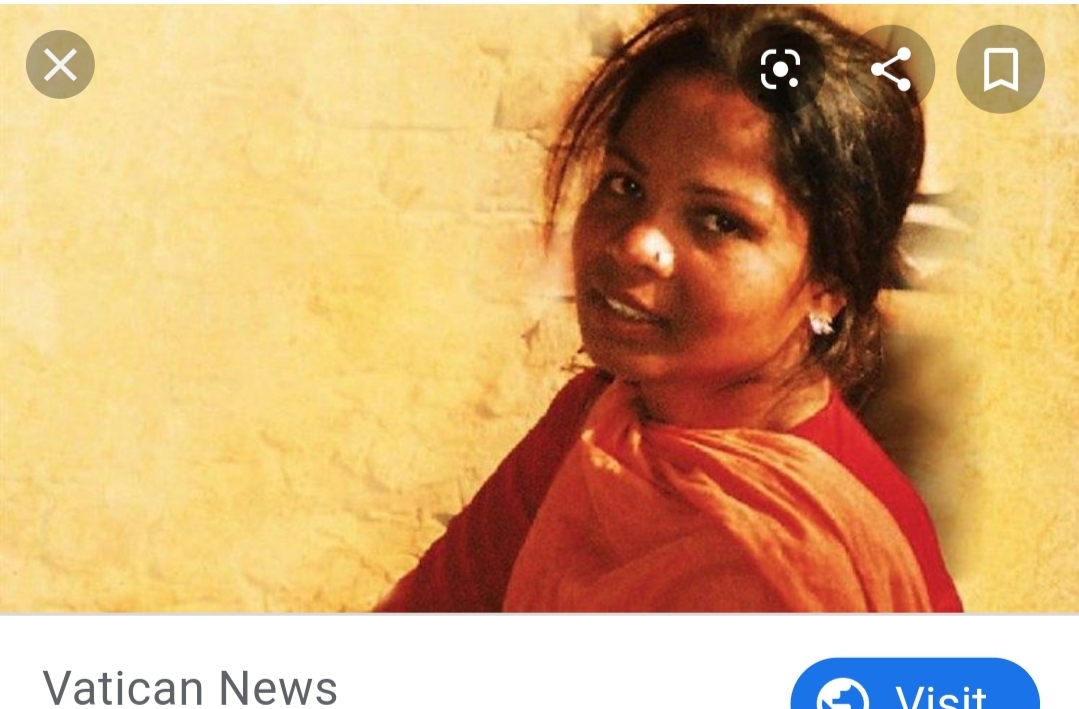 "They said change your faith, and you'll be freed. But I said no. I will live my sentence. With my faith.”

Christian Woman who was Jailed After Being Accused of Blasphemy

Christians make up less than two percent of Pakistan’s population (as of 2020), and are among the poorest citizens within the country. They have faced ample persecution from the Muslim majority but hold strong to their faith anyway. Asia is just one of those stories.

Asia was accused of insulting the Prophet Mohammed by some Muslim co-workers on the farm they all worked on.

In actuality, Asia took a sip of water and the Muslim women accused her of contaminating it. Next thing anyone knew Asia was imprisoned for blasphemy.

Some Muslims believe Christians are dirty, and will not share a container of water with those of the Christina faith.

Another "fun fact", in Pakistan you can be put to death for insulting the Prophet (a holdover of Sharia Law). So, because Asia dared to drink water, she was suddenly facing the death penalty. Gotta love it (I type completely sarcastically).

When she was convicted, Asia became the first Pakistani woman to be sentenced to death for blasphemy. Asia had been held longer than anyone else in Pakistani history for this crime (nine years) and had gone through every appeal. All hope seemed lost.

Finally, Asia was acquitted of the charge by the Pakistani Supreme Court on 31 October 2018. In May of 2019 she finally made it to safety with her husband and children in Canada (I say safety because she has made it to a destination with religious freedom, but it should be noted Islamic extremists have vowed to hunt her down and murder her, no matter where she lives).

Once arriving safely in the country, Asia wrote a memoir (possibly) with a French journalist entitled Enfin Libre! (Finally Free! for all you non-French speakers). Just before the release of the book’s English translation, Asia stated in an interview the book was written without her authorization and she doesn’t even know when the author penned it.* The controversy seems to stem from a passage in the book in which the French journalist stated a noose placed around Asia’s neck during an incident in her village was done with the consent of Pakistani law. Asia, however, says it was because of a dispute with neighbors and that the law was not in agreement with the people who tried to kill her (that day anyway). Asia’s words have been interpreted as her now agreeing with the very laws she was found guilty of (blasphemy) and she has angered the very people who fought so hard for her release. Personally, I believe this is a tactic for her to try and stay safe. Can you blame her? Asia’s own life and that of her family have been threatened over and over again. Maybe she's just trying to bow out of the spotlight and fade into the new identity Canada may have granted her.

Asia has also said she hopes to return to Pakistan someday. This also makes me believe her statement on the memoir has more to do with preserving her own sense of self and her family's security. Pakistan is still Asia’s country and she is proud the government was the one to release her. I hope someday things change enough she is able to go home safely.

As someone who has followed Asia’s story since I first came across it in 2016, I can tell you I spent that six-month period between November and May in constant fear. Muslim protestors in Pakistan surrounded the prison she was held in, holding posters and openly chanting death threats towards her. I was terrified that after all those years of being detained for doing nothing wrong, she would be murdered as soon as the government let her walk out of the prison.  Every few days I was Googling her name, desperate to hear any news. You can imagine my relief on the day I read she had made it to safety.

Asia’s story is not unique in Pakistani history. Thousands of her citizens have fallen victim to various crimes (including two of her most vocal supporters being murdered), like in any other country, but women in Pakistan seem to have it particularly horrible. In “her” memoir, Asia (or the journalist at least) recounts the various methods of torture the guards employed on Asia while in prison, including devices such as a brace put around her neck and tightened with a key. An attached chain allowed the guards to yank Asia around like a dog (the Pakistani government says all of the claims of torture in the book are “not plausible”—okay sure).

Another example of a Pakistani name we should all remember is Qandeel Baloch, who was murdered in a so-called “Honor Killing” by her own brother after becoming Pakistan’s first social media star.

So, I’m sorry, but here’s my bias coming in again. I will never, ever, support Sharia Law, and I hope and pray for the day its completely eliminated across the globe. Another victim of Sharia Law, this one in Iran, was Atefah Sahaaleh, who was executed by her government at the age of sixteen despite the judge knowing she was a victim of sexual assault and abuse (he may have abused her himself). Sharia Law is evil, end of story in my book.

I hope Asia is able to find peace, freedom, and happiness in Canada, and that she and her family never have to face the horrors of a corrupt and tyrannical government again.

*I want to note that I have not read the memoir myself, and am attempting to describe the controversy based off an article I read which is linked below.