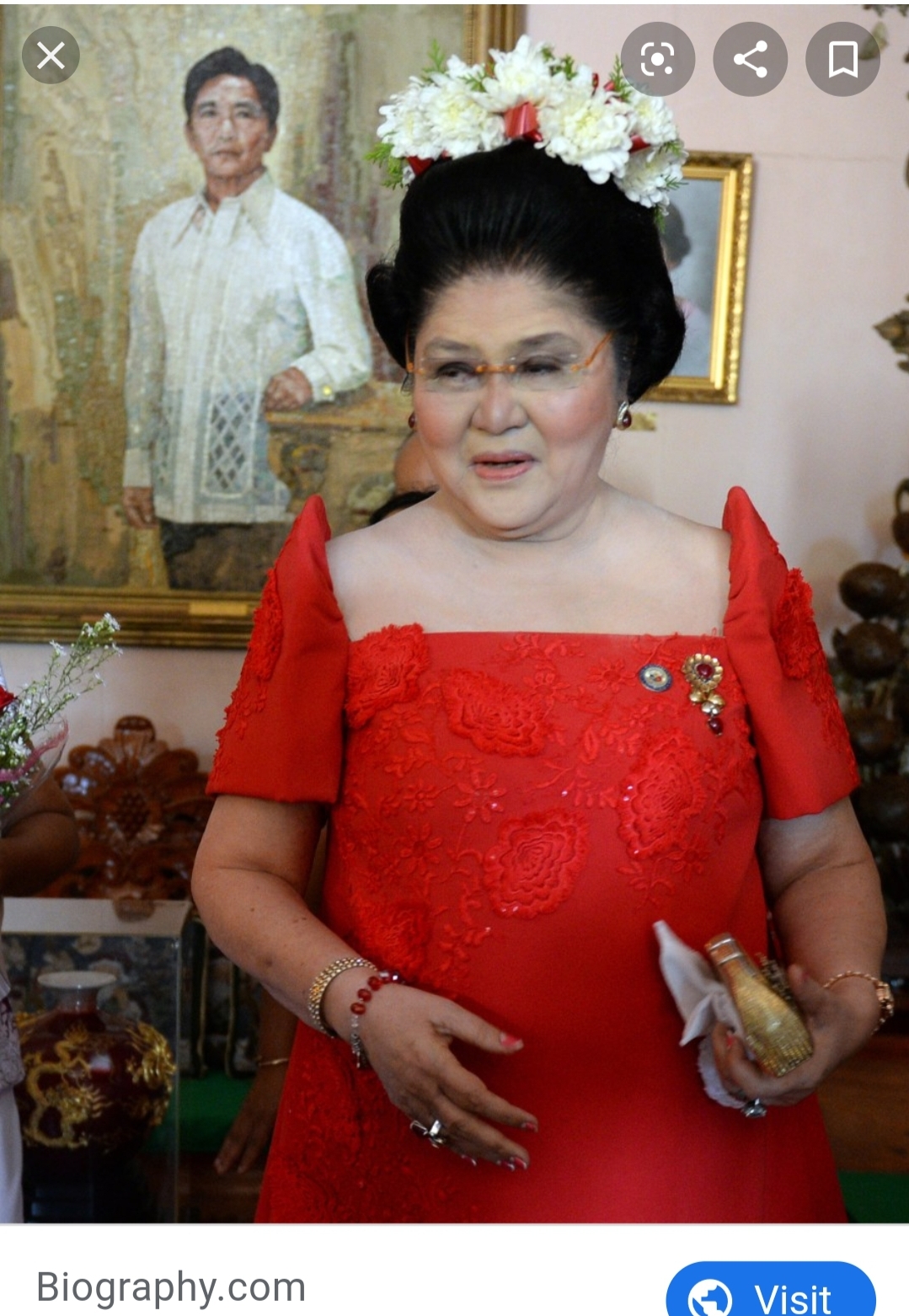 Imelda is most famous for her thousands of pairs of shoes and her overall extravagant lifestyle.

When Imelda was eight, her mother died from pneumonia. Her father’s legal practice went bankrupt soon after, and the family struggled financially for a long time. In 1949, Imelda won a beauty contest in her new home province and was dubbed “The Rose of Tacloban.” This nickname was far different from the one she’d earn later in life, “The Steel Butterfly.”

In 1954, Imelda married the up and coming politician Ferdinand Marcos after only meeting him eleven days prior. The couple had three children together. When Ferdinand was elected president in 1965, media likened the glamorous Imelda to another famous first lady of her time, Jacqueline Kennedy.

Beginning in the 1970’s, Imelda became governor of Manila and oversaw extensive beautification procedures across the city. This was one of many government positions she would hold throughout her tenure as first lady. One of her projects Imelda ordered was the rushed construction of a building to house the Manila Film Festival. The construction job was so rushed that the building actually collapsed, killing as many as 169, due to the poor planning and irresponsible construction plans. Local legend says some of the victims were buried under quick poured cement as the job continued to rush ahead. While the film festival did take place, the Philippines never became the cultural phenomenon like Cannes.

Imelda’s husband was a dictator more so than a president (as evidenced by his declaration of martial law in 1972) and the couple were driven out of the country after being accused of stealing billions from the Filipino people. Resentment had been growing for years, with as many as 35,000 citizens tortured and 3,200 executed without trial. In 1983, one of the leading critics against the Marcos regime was executed, and so three years later the people were finally fed up enough to oust the couple altogether.

Another instance of the Marcos’s gross negligence towards their people is evidenced in their “private safari park.” In 1976, Imelda and Ferdinand decided to evict 254 families from the island of Calauit. Once the people were gone, Imelda filled the island with a large collection of various African animals. The animals are still there today, though different breeds have become inbred thanks to a lack of supervision and overall neglect.

When Imelda fled to Hawaii, she left at least 1,200 pairs of shoes (Some sources suggest as many as 3,000) and 800 purses behind. And those were just the items that grabbed international attention. The entire palace was stuffed to the brim with designer everything.

Imelda was acquitted of racketeering charges in a New York court for her role in the missing money from the Philippines. The charges came down soon after her husband died in 1989. Two years later, Imelda returned to the Philippines only to be arrested the following day.

Imelda was eventually found guilty of various corruption charges and was given a lengthy prison sentence. She was also handed a $4.3 Million fine in the hopes of recouping some of the lost money. The decision was later overturned by the Supreme Court of her country.

Imelda ran for president of the Philippines twice. She lost the first race but withdrew from the second before she could officially lose. Imelda later served in the Philippines House of Representatives, winning races in 1995 and 2010. Two of her three children are also involved in Filipino politics.

In 2018, Imelda was sentenced to eleven years in prison following more corruption charges. This time the charges surfaced after prosecutors uncovered $200 Million in illegal transfers to Swiss banks while Imelda was governor of Manila in the 1970’s. As of 2019, Imelda was appealing the decision and had not gone to prison.

The president of the Philippines, Duterte, has acknowledge the Marcos family helped finance his victory in the presidential race in 2016. He has become very close (some say to close) to the Marcos’s and even allowed for Ferdinand’s body to be reburied in Manila (to learn more about that story, click the link to the video in this article). President Duterte has even publicly stated he wants Imelda’s son to succeed him and not the elected Vice President (who happens to also be a former human rights attorney).

In 2019, Imelda was back in the news after two hundred and sixty-one guests at her ninetieth birthday party were rushed to the hospital with suspected food poisoning. The patients ended up at nine hospitals, but luckily the number of people affected wasn’t worse. In all, enough food had been prepared for 2,500 guests. Neither Imelda nor her other family members were affected.

In 2020, a controversial documentary about Imelda was released around the world. Entitled “The Kingmaker”, the film struggled to beat censors in the Philippines. However, opposition politicians and activists in the country praised the film as a great way to educate those under forty-five in the country (who make up sixty percent of the population). The film has been championed as a way to ensure the Filipino people never forget what happened to them under the Marcos Regime. Only time will tell.