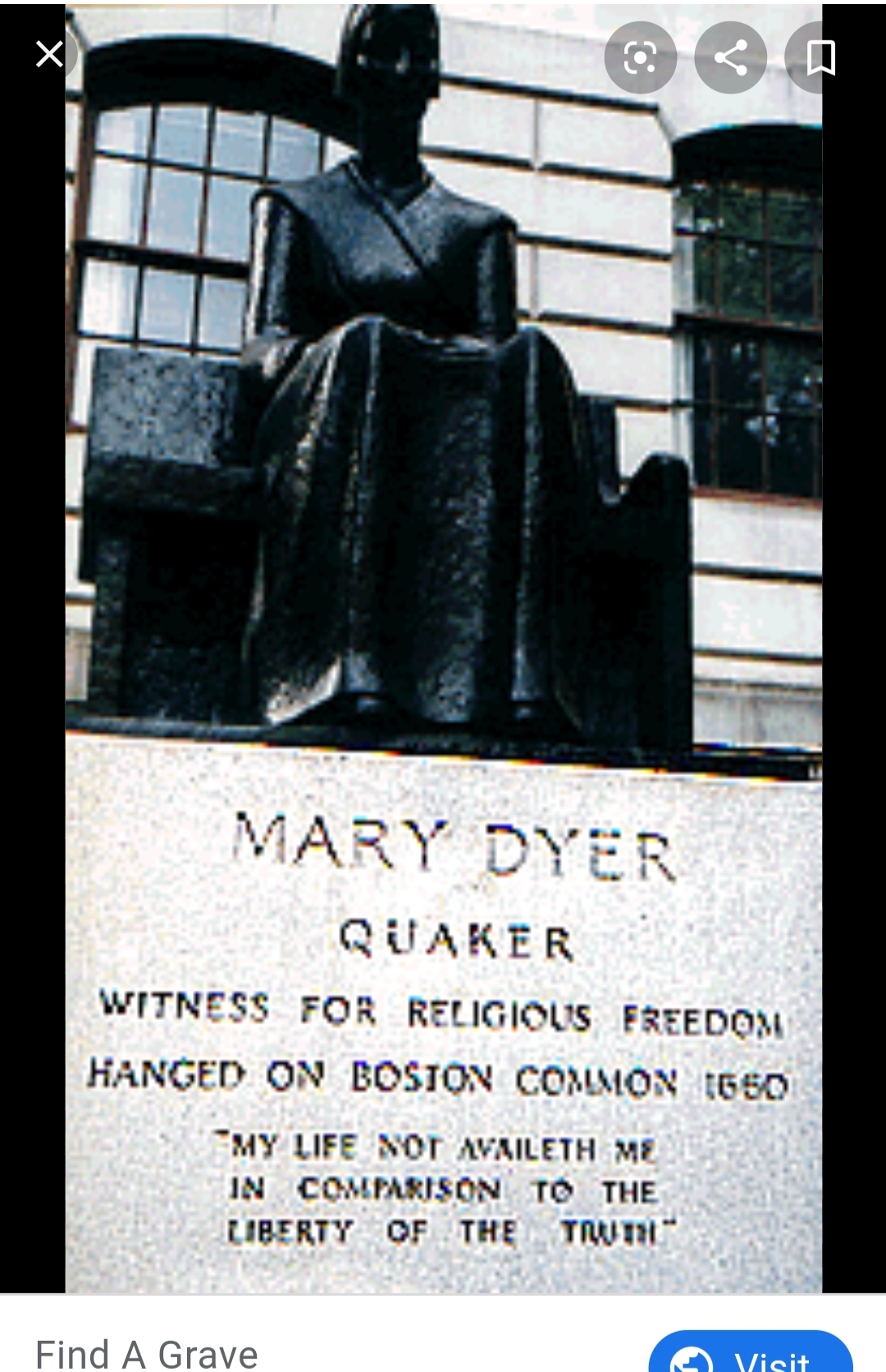 One of America’s First Religious Martyrs

Mary converted to Quakerism (or more correctly a member of the Society of Friends) after being born a Puritan. She believed in Anne Hutchinson’s preaching and supported the message behind them (before she converted, both women still identified as Puritans at the time). Anne and Mary were therefore seen as dangerous outliers to the theocratic Puritan government in charge of the Massachusetts Bay Colony. The dangerous words Anne and Mary preached? That god “spoke directly to individuals” rather than only speaking through members of the Clergy (Quote from "Quakers in the World" linked below).

Before she, her husband, Anne Hutchinson, and several others were banished from the colony, Mary gave birth to a stillborn deformed baby which was privately buried. Mary and her husband would eventually have six children; the deformed one was her third.

After her banishment, the governor of the colony ordered the body exhumed to be ridiculed and used as proof Mary and her friends were heretics. His disgusting and vile description of the dead child circulated throughout the western world and was even published in England several years later.

After their banishment, Mary and her friends went to Rhode Island, which was founded on the principle of religious freedom. Anne and her family went to Long Island, where they were slaughtered by a tribe of Native Americans. A few years later, Mary and her husband traveled to England, where Mary learned of the Society of Friends and their beliefs for the first time. Mary identified their beliefs as similar to the ones she herself had come to accept with Anne Hutchinson years before. This is when Mary converted to Quakerism.

Mary was not just a Quaker, but a preacher in her own right. The Society of Friends was one of the first religious sects to allow women to preach before congregations. This definitely attracted a wide variety of women to their teachings and way of life.

Remaining in England until 1657, Mary finally returned to the colonies. (I'd like to note that the details from here on out get a little sketchy depending on which source you use, but this is my best summation of those various stories and sources). A year later, Mary traveled to Boston to protest the new law that had been put in place which banned Quakers from living in the colony. The law also mandated Quaker books be burned, and any new Quaker arriving from England be jailed. Mary was arrested for her protests but was later released after her husband, who hadn’t converted, was able to get her out on the promise Mary would never return to the Massachusetts Bay Colony.

Mary was lucky. Other Quakers in the colony faced punishments like whippings, having their ears chopped off, and being branded with the letter B on their forehead (for Blasphemy—subtle I know). Others even had their tongues burned with hot irons to prevent them from speaking their blasphemous ways.

Despite knowing all of this, Mary wasn’t about to listen to any banishment order. She re-entered Massachusetts twice more and was caught and arrested both times. The first time, Mary was kicked out of the colony and warned against coming back. The second time she came back, Mary was arrested alongside other Quakers who had traveled with her to publicly defy the law. This time Mary was sentenced to death alongside two other Quakers. The two others were hung, but at the last-minute Mary’s husband (or son, sources differ) secured a reprieve for her, against her wishes. Mary would never renounce her newfound faith.

In 1660, Mary returned to Massachusetts again. She had continued to preach all over New England and couldn’t ignore the law that banned her people from merely living within the boundaries of Massachusetts Bay. Her husband and family begged her not to go, and then begged her to repent after she was arrested once more. Mary stood by her convictions and beliefs and refused. She was once again sentenced to death.

Mary was hanged in Boston alongside three other Quakers. Today, they are remembered as the Boston Martyrs. Three identical statues of Mary stand in front of the Massachusetts state capitol, the Stout Meetinghouse of Earlham College in Richmond, Virginia and the Friends Center in Philadelphia, Pennsylvania.