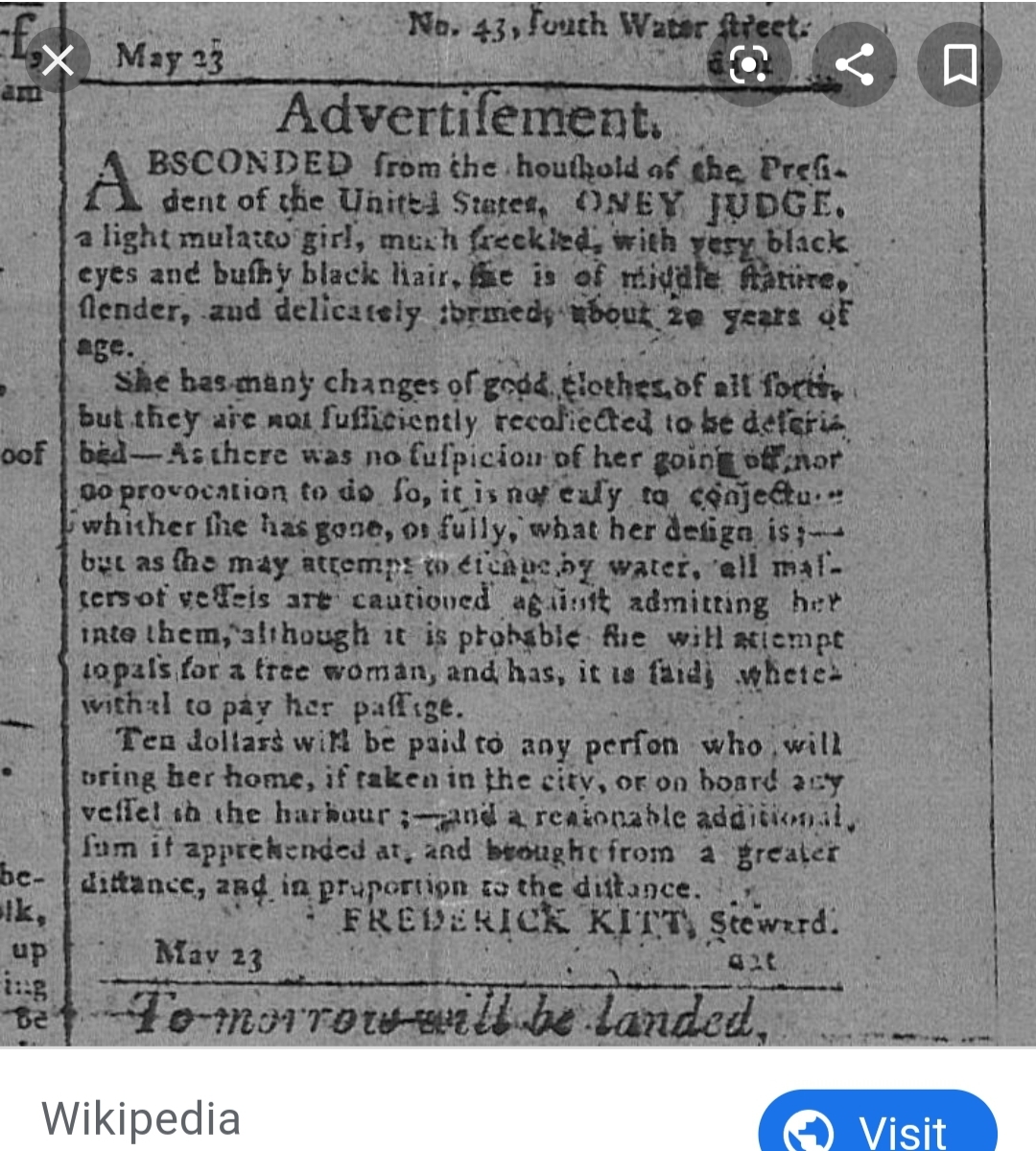 "I was packing to go, I didn't know where; for I knew that if I went back to Virginia, I should never get my liberty."

Ona escaped by walking out the front door and never coming back despite George’s attempts to recapture her.

Yes, you’re reading that right. Ona literally just walked out the front door one day and decided she never wanted to go home again. Not that anyone could blame her for that of course.

Ona’s mother was a slave named Betty, and her father was a white English tailor employed by the Washington’s (or was possibly an indentured servant, sources differ). From the age of ten onward (or twelve, again, sources differ), Ona served as Martha Washington’s personal maid. Ona, her mother, and her sister were all skilled seamstresses. Another important thing to note is that Betty, Ona’s mother, had belonged to Martha’s first husband, and as such she and her heirs belonged to the Custis estate. So even though they all lived at Mount Vernon and George was their overseer, he was not their owner, Martha and her children were. This also meant that, should Ona or any other member of her family escape, George would be forced to pay the Custis estate back for the value of the escaped slave in question.

When Ona was fifteen, she was one of the slaves selected to follow the Washingtons first to New York, and then to Philadelphia after George was elected president. To avoid the 1780 emancipation law passed in Pennsylvania, Ona and the other slaves were rotated out of the state and back to Virginia at certain times in order for the Washingtons to avoid having to free them.

Ona’s world was opened to new horizons in Philadelphia. For the first time she was able to see what life for free African Americans was like. She was able to attend the circus or the theatre and was given higher quality clothing to go alongside her more visible position as a member of the president’s household. All of these small details added up to something huge in Ona—the desire to be free.

The opportunity presented itself on 20 May 1796. The Washingtons were preparing to return to Virginia for a time, and were busy eating dinner that afternoon. Ona knew this meant she would be returning to Virginia soon too, and she would never again have the means and opportunity presented to her at that moment. And so, Ona walked out the front door of the Washington home and never looked back. George and Martha were incensed, telling everyone Ona had never been mistreated. She’d been given plenty of good clothes, a room of her own (at that moment, previously she’d shared with Martha’s granddaughter who was in boarding school at the time) and Ona was treated more like a member of the family than a servant. Martha also decided Ona would have never left on her own. Instead, she must have been seduced by a Frenchman who took her away. The part about the Frenchman was definitely untrue, and the rest, while possibly true, still don’t excuse the fact that Ona wasn’t a free member of the family, she was their slave.

Two days after Ona disappeared, the first advertisement was published in a local paper, describing Ona and offering a reward for her capture. The article went on to state Ona had left with “no provocation” causing her departure. Really? When asked about this later on in life, Ona said she actually had two reasons for running away. The first was her desire for freedom. The second was because Ona had learned she was to be given to Martha’s granddaughter, who was known to have a fierce temper.

A few months after her escape, someone recognized Ona on the street. George enlisted a man in New Hampshire with the goal of enticing Ona to come back to the Washingtons. Ona agreed to return to Philadelphia, if and only if she was promised her freedom upon the death of George and Martha. George was furious and refused to accept her request. But he also warned the man he had hired to recapture Ona to be careful. If George used violence to take back his slave it would anger the abolitionists in the Northern states, and George knew that. If the man made any further attempts to recapture Ona, they have been lost to history.

Unfortunately, Ona’s life as a fugitive slave was incredibly difficult beyond the obvious reason of having to live in fear of being placed back in bondage.

Ona watched her husband and both daughters die while she lived in abject poverty and her son, who was a sailor, went to sea and never came back.

Once, when Ona’s elder daughter was a year old, George Washington made one more attempt to recapture Ona. Her husband was out to sea at the time and so Ona was alone with her daughter. George’s nephew was in town, and after tracking Ona down, he tried to persuade her with words to go back. When Ona refused, he decided he would take her back through force.

The nephew spent that night eating dinner with one of New Hampshire’s senators. When he mentioned his plans to retake Ona, the senator managed to smuggle a message to her in warning (or someone in the house did at least. Its never been proven it was actually the senator but--oh you get the idea!). Ona took her daughter and hired a carriage, escaping to a friend’s home in a neighboring city. George’s nephew failed to locate her and came home empty handed. Ona and her daughter Eliza were safe for the moment, but as I previously mentioned, Ona outlived every member of her family.

Ona did manage to become literate after escaping and converted to Christianity. As she aged, Ona was given financial support from the government after being declared a pauper.

Her sister was freed in later life and tried to track Ona down but was unable to do so in time. And so, Ona died alone, her circumstances not much better than those she had fled from in her younger years, save for one important difference. She may have died alone, but Ona died free, and that distinction made everything else worth it.