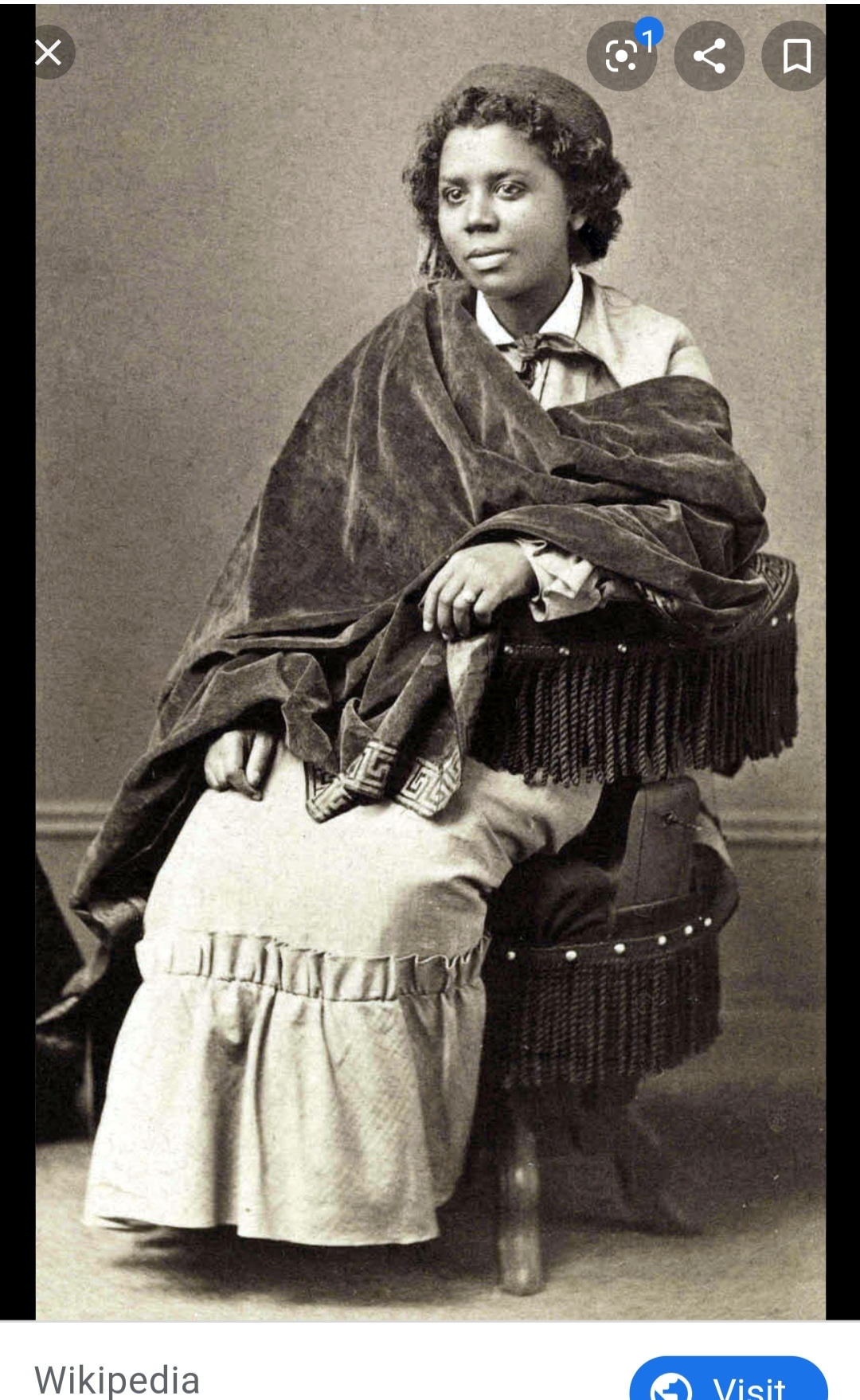 “There is nothing so beautiful as the free forest. To catch a fish when you are hungry, cut the boughs of a tree, make a fire to roast it, and eat it in the open air, is the greatest of all luxuries. I would not stay a week pent up in cities, if it were not for my passion for art.”

Edmonia has also been hailed as "The First Female African American and Native American to achieve International Fame as a Sculptor in Neoclassicism". I figured that was a little too wordy to have as her “claim to fame” at the beginning of the article.

Edmonia’s mother was a Chippewa Native American (also known as Ojibwe) and gave her the Native name of Wildfire. Her father was a freeman of African descent (one source states he was from Jamaica).

Edmonia was orphaned by the time she was five but stayed with her mother’s people until she was twelve. Edmonia’s older brother Sunrise became a gold miner in California, and he helped her pay for her schooling. After a time, Edmonia shed her native name and officially began going by Mary Edmonia, and later just Edmonia.

Edmonia attended Oberlin College with her brother’s help but was not allowed to graduate. Most state the reason Edmonia was not allowed to graduate was because of a racial issue. Firstly, Edmonia was accused of poisoning two white classmates. Though she was later acquitted of the charge, Edmonia was also accused of stealing art supplies. Between the two charges school officials barred her from graduating. This was a harsh blow that came after an even harsher beating. After Edmonia was accused of poisoning two fellow white students, she had been kidnapped and beaten nearly to death by a mob who didn’t believe she was innocent. The cruel treatment Edmonia faced during her dark days in college would mark her artistic works for the rest of her life.

After leaving Oberlin, Edmonia moved to Boston and began what would be a limited education in sculpting. In her day, only white men (and a select few white women) were able to study human anatomy in order to create a more accurate picture of the human body. But Edmonia’s work never suffered from not being able to take the traditional route. If anything, this made her work that much more human and real. Soon enough, Edmonia began to sculpt medallion portraits and eventually portrait busts of the likes of William Lloyd Garrison, Wendell Phillips, Charles Sumner, John Brown, Abraham Lincoln, Ulysses S Grant, and more. The sales of these works would allow Edmonia to travel to Europe for the first time.

It was during her European trip in 1865 and 1866 that Edmonia decided to settle in Rome. She learned Italian and began to sculpt in the neoclassical style, popularized by a revival of all things Ancient Greek and Roman.

In the 1870’s, for instance, Edmonia spent four years on her most epic sculpture of her career, The Death of Cleopatra. After shipping the three-thousand-pound structure to Philadelphia, Edmonia was relieved to see the work placed at the Centennial Exhibition. Some saw the statue as a masterful creation, while others criticized the work, which depicted Cleopatra VII in the moments after her suicide, as too graphic for the Victorian mindset. After the exhibition ended, Cleopatra was dumped in an area of Chicago and was forgotten about until the 1990’s, when she was donated to the Smithsonian.

Edmonia’s sculptures were unique from others working in Italy at the time. She rarely employed outside help, while others would create a plaster bust and then transfer the work to marble with the help of native Italian craftsmen. Edmonia decided against that route for two reasons: she didn’t have the funds to pay for another’s help and she didn’t want to lose her originality in the pieces.

Sadly, very few of Edmonia’s sculptures survive to present day. She focused on abolitionists and other works relating to her African and Native American heritage, but she also sculpted religious works and other icons.

Edmonia visited the United States a few times in the latter part of the nineteenth century, but afterwards she fades from history. Her date and place of death only recently came to light. She never married or had children. Finally in 2017, Edmonia’s grave was marked with a granite headstone after being unmarked for one hundred-ten years.

*Most sources agree Edmonia was born in New York, however I thought I better mention that one Smithsonian article states she was born in either New York or Ohio. If evidence ever comes to light Edmonia was definitely born in Ohio as opposed to New York, I will update this page accordingly.