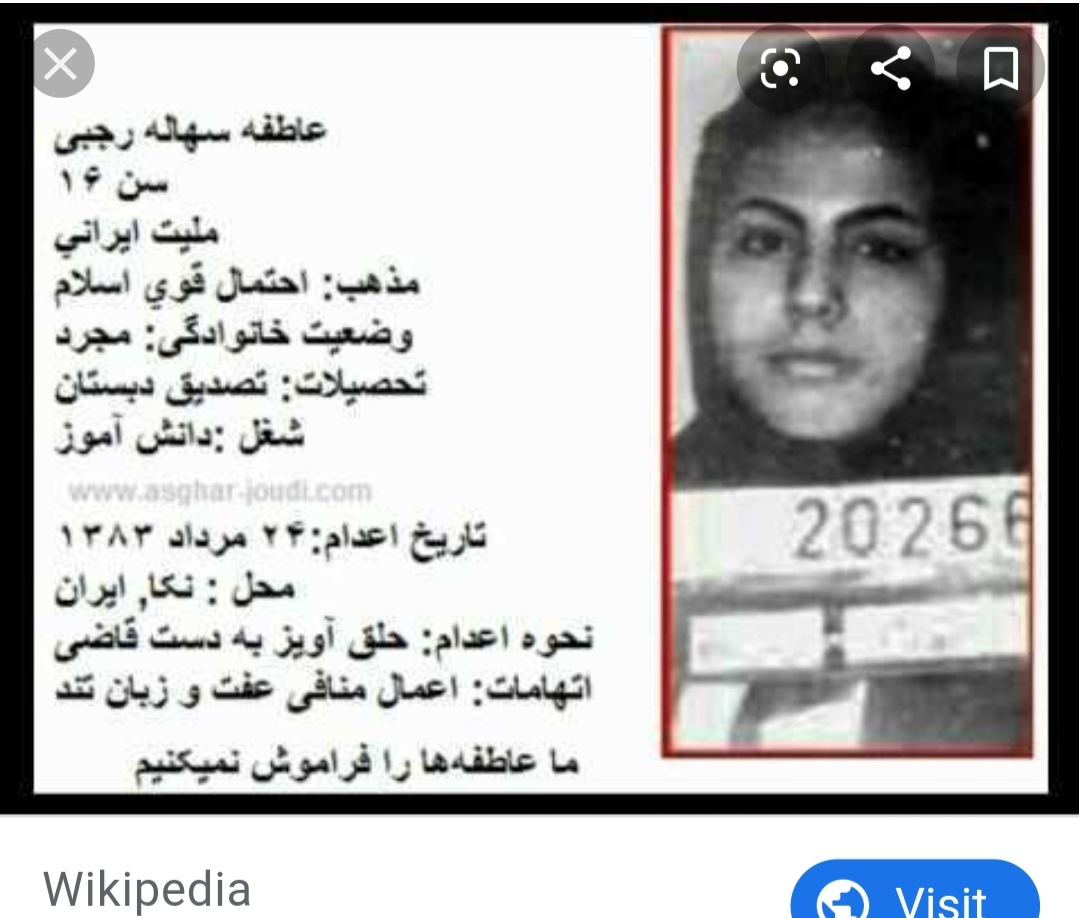 "Atefah used to say the moon won't always stay behind the clouds - and she was right." -Atefah’s father, Safer Ali

The Fight for Human Rights is Far from Over

Atefah was executed at the age of sixteen after being charged with adultery and crimes against chastity. In actuality, Atefah was raped by a fifty-one-year-old man for three years (he was married with children).

And if that’s not bad enough, another man (as in one) literally served as her judge, jury, and executioner. That single man also later admitted to raping Atefah before she had been executed. The judge also reportedly tortured her for names of other men she might have had relations with.

Atefah’s mother and brother both died when she was five or so and her dad became a drug addict. This left Atefah in the care of her grandparents, who were both really old and feeble from arthritis. Atefah had to help them as much as they were able to help her.

She had been previously arrested by the morality police two or three times for having relations with unmarried men (the punishment of which was 100 lashes each time). Her first arrest occurred when Atefah was only thirteen years old, and another source claims the first time she was raped, she was nine.

After being arrested the final time, Atefah realized she was losing her case. She removed her hijab (which is seen as contempt of court) and even threw her shoes at the judge saying her rapist should be punished and not her. The judge sentenced her to death.

Atefah appealed and was not appointed a lawyer (which is against the law in Iran). Atefah’s death sentence was upheld by the Supreme Court after her judge personally appealed for her death.

The court documents claimed Atefah was twenty-two despite her birth certificate and other records certifying she was sixteen (and ergo too young to be executed per Iranian law). However, this detail was not noticed until it was conveniently too late. Beginning in 1995, Iran promised to stop executing anyone under the age of eighteen, but the practice has continued ever since. Usually it is carried out more carefully, in secret, but in Atefah’s case the government hardly even tried to hide it.

Atefah was publicly hung from a crane for forty-five minutes in her hometown. The man who had ensured she was given the death penalty would personally place the noose around her neck. The next day her body was stolen and never recovered. She had been arrested on May second, and by August fifteenth of the same year she was dead.

According to one source, at the time of her death Atefah was trying to turn her life around. She was dating a nice boy and he wanted to marry her, but Atefah was underage and too young to be wed. Imagine that, too young to marry but old enough to be executed by your own government.

Two months after Atefah was murdered, two policemen in Neka were arrested and charged with running a child sex trafficking ring. But the arrests came too late to help Atefah.

Sadly, Iran’s government is operated under a mixture of Sharia Law and some other laws mixed in. This means at the age of nine for girls and fifteen for boys, these children can be judged criminally responsible for crimes as though they are adults. It also means a nine-year-old girl is capable of consenting to a sexual relationship, even if the partner in question is a fifty or sixty-year-old man.

In most civilized societies, the proof needed for a conviction is “beyond reasonable doubt” (you’ve probably heard the phrase a time or ten on Law & Order). According to a source I've listed below, Sharia Law is different, the only proof needed for a conviction is “the knowledge of the judge.”* This is how Atefah was literally judged and hung by one man.

If Sharia Law had been followed to a T, Atefah would have been stoned to death. Instead, Iran has been hanging everyone the way Atefah was for years. It doesn’t matter the crime, if you were sentenced to death, you’ll be hung.

Atefah's death stunned her father to his core. After years of abusing heroin and being unable to care for his loved ones, he wasn't there for Atefah when she died. Some sources say the crowd was filled with strangers from the town, while another said her grandfather had managed to be there for her. Either way, Atefah's father was not there. Her death finally woke him from the fog of addiction, and he managed to get clean. The quote in this article was obtained from him after a British journalist snuck into Iran and interviewed him. The fight for Iran to stop executing underage children continues to this day.

*Please note I am not an expert in criminal law, especially pertaining to Sharia Law and the Iranian law codes of all things, but from the sources I have listed below I provided information in this article to explain how a government could possibly justify executing a sixteen year old victim and survivor of sexual exploitation. If I have something wrong and you have a source to explain what it is I have wrong, please send it to me through the contact form and I will update the entry accordingly.