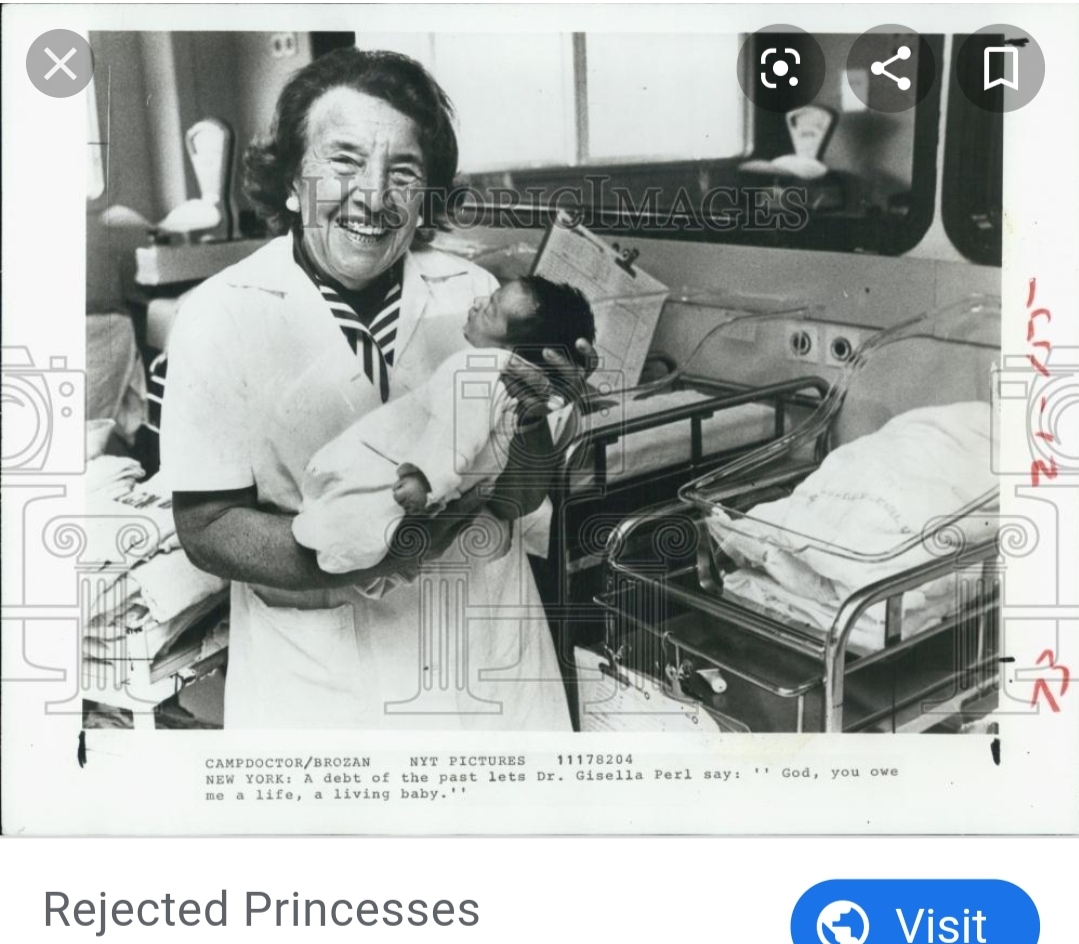 “I swear on this [prayer] book that wherever life will take me, under whatever circumstance, I shall always remain a good, true Jew.”

Gisella’s father was a Rabbi, and Gisella herself was a gifted student. When she was sixteen, she became the only woman and only Jewish student to graduate from her secondary school. She spoke Yiddish, German, French, Hungarian, Romanian, and eventually English. At first, Gisella’s father did not want to allow her to go to medical school, for fear it would make her lose her faith in Judaism. However, after Gisella convinced her father nothing would make her lose her faith, he relented, and sent her to school.

After a time, when Gisella was given her first payment from a patient, she thanked her father with a prayer book engraved with his name. Gisella would later say her father went into the gas chamber holding that very prayer book.

In 1944, Gisella was working as a gynecologist in a ghetto in occupied Hungary. Her husband was a surgeon and they had one son and one daughter. One day, Gisella, her husband, her son, her parents, and her extended family were all rounded up and sent to Auschwitz. Gisella’s daughter was spared because she was hidden with a Gentile family.

Upon arrival in the camp, Dr. Mengele assigned Gisella to work in the camp hospital. At first, she did basic wound care like cleaning wounds and providing bandages. However, things soon changed. Dr. Mengele informed Gisella she would need to inform him of any pregnant woman discovered in the camp. He claimed the women would be transferred to a special are of the camp and given better nutrition for their babies. Instead, Gisella learned they were all either transferred to the medical experiment block or beaten and tossed into the crematoria, sometimes while still alive. Gisella made the decision and performed hundreds of abortions to save the mother’s lives. When the mothers were too far along for an abortion to be possible, Gisella would assist in the birth and then smother the child before any other harm could befall them. Because of her work, she was called the Angel of Auschwitz.

According to Jewish faith the abortions were permitted because they saved the mother’s life (if they had been discovered pregnant the mother most likely would have ended up in the clutches of Dr. Mengele).

Near the end of the war, Gisella was transferred twice and eventually wound up in Bergen-Belsen, where she was liberated. Earlier that day, Gisella delivered the first free baby born in the camp. She spent months searching for her family, and while Gisella would one day learn her daughter had survived, the rest of her family had perished in the camp. The only other member of Gisella’s family to survive was her sister Rose, who had traveled to then-Palestine in 1938 in order to study there.

In 1947, Gisella attempted suicide, weighed down by what she had done and all the horrors she had seen and been dealt during the Shoah. Later that year, she was invited to the United States to speak on behalf of the six million whose voices had been silenced during those dark days. Eleanor Roosevelt invited Gisella to lunch, and Gisella at first declined by saying she was kosher. When Eleanor insisted, Gisella relented and appeared to find Eleanor had provided a kosher meal for her. According to Gisella, it was Eleanor who got her back to work by saying, “Stop torturing yourself; become a doctor again.”

In 1951, Gisella was granted citizenship in the United States. She began working at Mount Sinai hospital in New York, where she specialized in infertility. She would eventually open a private practice on Park Avenue. She would author or co-author nine papers on diseases that commonly affected pregnant women.

Gisella went on to deliver over 3,000 babies after the war in the hopes of helping repopulate the Jewish people and give penance to what she had done in the camps. Each time she entered a delivery room, Gisella prayed, “God, you owe me a life—a living baby.”

In 1979, Gisella moved to Israel to live with her daughter and grandson. She explained her move by saying the last words she explained with her husband and father were, “We will meet someday in Jerusalem.”

Her memoire/autobiography was called “I was a Doctor in Auschwitz.” Published in 1948, the account was one of the earliest accounts of the Shoah published and one of the only to recount the horrors of the sexual violence inflicted on female inmates.

Gisella’s story is even more interesting when compared with that of Stanislawa Leszczynska, who was known as the Midwife of Auschwitz for her work in helping deliver babies for women who were much further along in their pregnancies when brought to the camp. Both women were angels and saviors to the women they served and should be honored today.