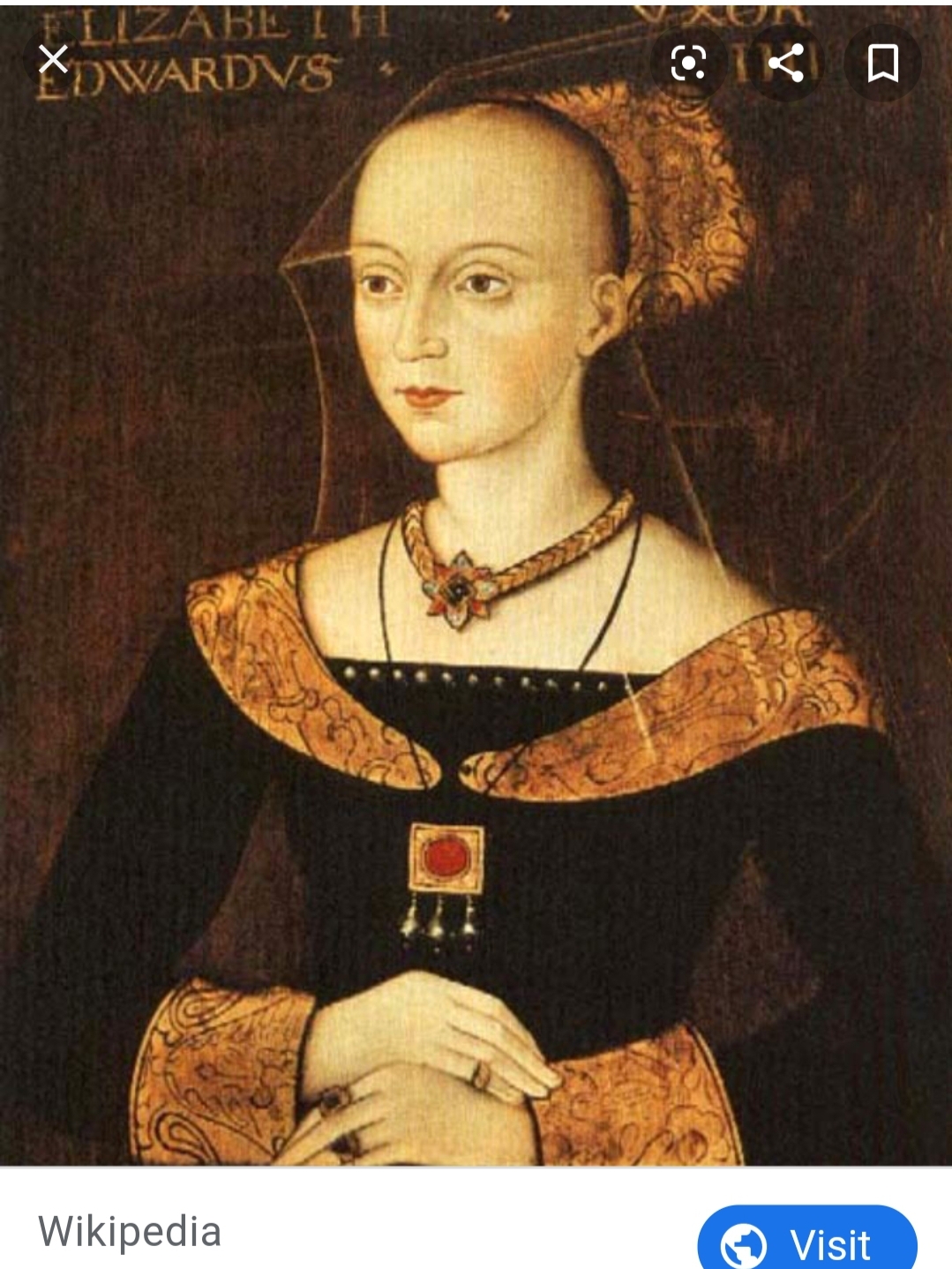 Queen Consort of England Known as “The White Queen”

Elizabeth was frowned upon (to put it politely) because of her Low Birth Status. In layman’s terms, Elizabeth was not a part of the English aristocracy, so how dare the King marry her?!

Elizabeth’s first husband (and father of two of her children) was a knight who was killed early on. Elizabeth’s family, the Woodvilles, had long been seen as the type who wanted to crawl up to the higher ranks of English nobility instead of staying where they currently hung on the ladder. This came in part from Elizabeth’s mother, Jacquetta, who was a part of the Royal House of Burgundy. Jacquetta was close with Henry VI and his wife, Margaret of Anjou. Henry and Margaret were the leaders of the Lancastrian faction, symbolized by a red rose. This fact will be important in a minute.

Elizabeth herself was renowned for her beauty. She had silky blonde hair and features that might have made her a model had she lived in the modern world. Its hardly a surprise the king would fall in love (or at least in lust) with her.

Elizabeth secretly married Edward IV (who was claimant to the throne during part of the tumultuous period known as The Wars of the Roses), around May of 1464. She was five years older than the young king. Because of this secret marriage, Elizabeth became the first commoner in English History to become Queen (however she was still “well-blooded” which means she wasn’t from the peasant class either, more of an in-between). Even more interesting than the fact Elizabeth and Edward seemingly married for love was the fact that Elizabeth and her family, the Woodvilles, had fought against Edward and for the previously mentioned king Henry VI. Luckily for her, Edward pardoned Elizabeth’s father, and soon after he married the “older” widow. Edward IV was the leader of the rival Yorkist Faction, and they were symbolized by a white rose. When Elizabeth changed sides to support the Yorks, she also changed her mark to identify with the White York rose; ergo she became the White Queen.

Elizabeth had twelve children in total and was described as selfish and demanding by some, but a loving wife and doting mother by others. When her husband suddenly died all of their shared children were considered illegitimate and Elizabeth herself had to take sanctuary in a church to save her own life. The ten children Elizabeth and Edward shared were declared illegitimate after a bishop stepped out of the woodwork to suddenly claim Edward had promised himself to another woman before Elizabeth, and so the secret wedding between Elizabeth and Edward was invalid (though it should be noted the other woman in question and anyone else who could have been a witness was long dead by that point). This obviously helped the power-hungry Richard III (Edward’s younger brother) immensely; however, after Elizabeth’s sons were removed from the line of succession in lieu of Richard, the new King took things a step further, and most likely had his nephews murdered. To this day no one can prove this for certain, but Elizabeth’s sons became known as “The Princes in the Tower” after they went missing from the Tower of London. The skeletons of two young boys were discovered within the tower’s walls in the 1600’s but have still not been definitely proven to be the young princes.

Of Elizabeth’s ten children with Edward, seven were girls and three boys. Five of the girls reached adulthood, but the other two girls and three boys all died in childhood or were murdered as mentioned above. Around the same time her sons went missing, Elizabeth also learned her father and one of her sons from her first marriage had been executed on order of Richard III.

Elizabeth did not take this lying down, and she conspired with Margaret Beaufort, the mother of Henry Tudor, promising Henry her oldest daughter in exchange for him taking the throne. Henry needed Elizabeth’s daughter to help tie in his legitimate claim to the throne, and Elizabeth wanted Richard gone. Their scheme worked, and Henry became the first Tudor king.

Once Henry was on the throne, Elizabeth’s children were made legitimate again, and now simply Dame Elizabeth Grey retired and died in peace. However, after her death, she was not given a state funeral befitting a former queen. Instead, she was buried in silence with few mourners there to observe the ceremony. Smithsonian has put forward a theory believing she may have died from plague, which would explain her simple funeral. Plague victims were buried as soon as possible for fear of contagion. However, another possible (and arguably more probable) explanation was the fact that Elizabeth herself requested a small and intimate burial. Elizabeth had spent the last years of her life living in seclusion at a convent and did not want a fancy send off.

The YouTube Channel “Real Royalty” has uploaded a four-part documentary series chronicling the events of the Wars of the Roses. I went ahead and created a playlist of them, which you can reach here.

The Woodvilles: The Wars of the Roses and England's Most Notorious Family by Susan Higginbotham