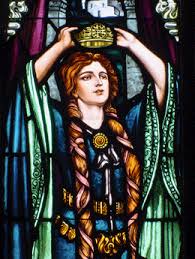 The First Queen of Scotland in Recorded History

Gruoch has earned this title not by being the first ever queen of Scotland, but by being the first whose name we know. There were other kings before, and they obviously had wives, but no one thought to write down or record their names before Gruoch came along*.

Gruoch was married twice. Her first husband died in a fire with fifty other men, and her second husband was Macbeth—as in the real one on which the Shakespearian play is based.

Gruoch had one son with her first husband and was already royalty before marrying her now infamous second husband. Gruoch was a relative of Malcolm II, king of Scotland from around 1005 to 1034. This connection made her political gold, and her first marriage helped ensure her husband’s family had a viable shot for the throne of Scotland. Her first husband, Gillacomgain (also written as Gille Coemgáin), and his brother had forcibly taken the throne of Moray (today a part of Scotland but back then a kingdom in its own right). Unfortunately for Gillacomgain, Mac Bethad mac Findláich (aka Macbeth), son of the now dead king, was not at all pleased with this turn of events, and eventually returned to exact his revenge.

In 1030, Macbeth returned from exile and killed Gillacomgain and his followers in the aforementioned fire. Soon after, Macbeth married the widow Gruoch. The death of Gillacomgain and the marriage of Macbeth and Gruoch ended the Game-of-Thrones-esque bloodiness ravaging the Scottish royal family and strengthened the family’s ties to the throne. Macbeth was free to raise Gruoch’s son as his own and heir, but whether or not Gruoch was a willing participant in the marriage or how she actually felt about any of this is unknown.

In 1034, Macbeth went to battle against the actual king of Scotland at the time, Malcolm II. Though Malcolm died that day, Macbeth did not become king. Instead, a man named Duncan who had a much stronger claim to the throne took that title. Six years later, in 1040, Duncan marched into the Kingdom of Moray to challenge Macbeth’s claim to that throne. Another battle ensued, and this time Duncan died, possibly at the hands of Macbeth himself.

For the next seventeen years, Macbeth and Gruoch ruled Scotland and Moray jointly as King and Queen. Macbeth would have had next to no claim to the throne of Scotland without Gruoch by his side. They were so confident and secure in their claims, in 1050, both Macbeth and Gruoch left Scotland on a pilgrimage to Rome.

This is where sources begin to differ. The first account of Macbeth’s end comes this way: In 1057, Macbeth abdicated the throne in favor of his stepson; Gruoch’s only son Lulach. Unfortunately, Lulach was killed in battle the following year. Lulach had a son who was only a child and was much too young to rule on his own. Macbeth took up arms to defend his step-grandson’s claim and died in the fighting.

Now, a second account tells of Macbeth’s end like this: In 1057, Macbeth is killed in battle fighting against Duncan’s son, Malcolm. After Macbeth’s death, Lulach takes the throne, and then he himself is killed the following year (1058), whereupon Malcolm takes the throne for himself. (I should tell you more sources tend to stick to this story as opposed to the first).

After Macbeth’s death, whichever way it happened, Gruoch disappears from the pages of history, but she was probably buried beside Macbeth in the royal burying grounds in Iona.

We may not know much about Gruoch, but we do know she was radically different from the villainess, Lady Macbeth.

* There is one possibly known queen before Gruoch; in one source the wife of Duncan I is listed as Suthen, but whether or not that was her actual name remains unknown seeing as no one else bothered to write her name down.

A History of Scotland by Neil Oliver