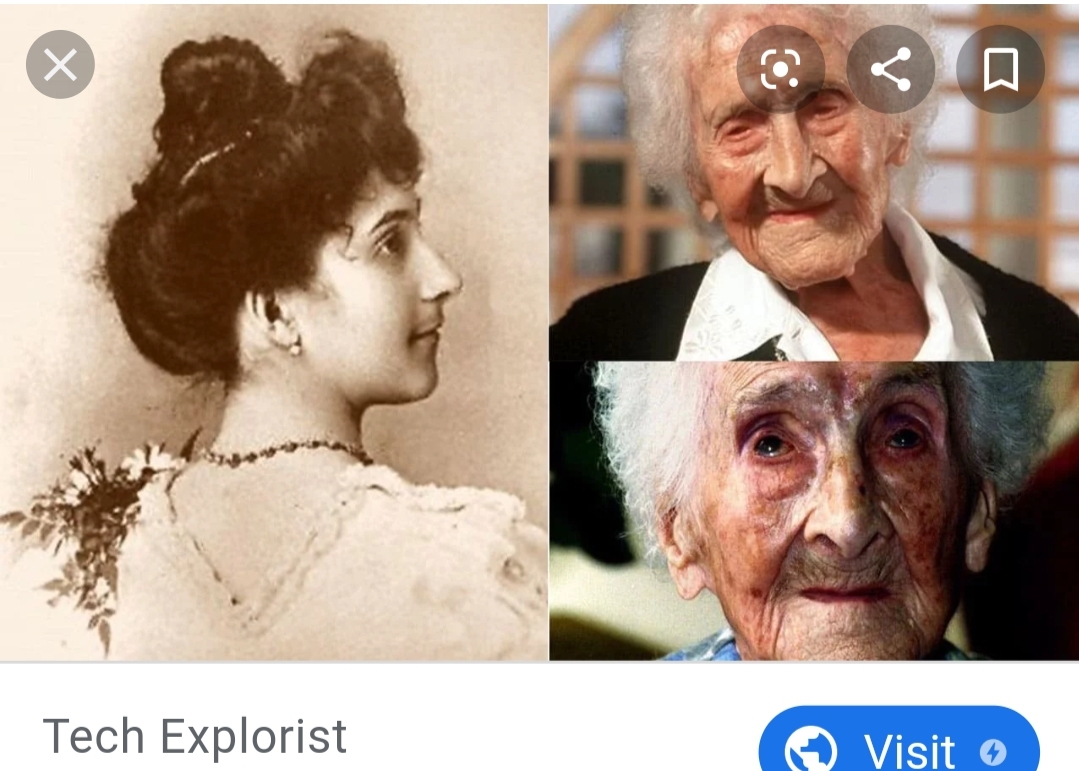 Jeanne lived 122 years 164 days; outliving her daughter and grandson both.

She spent her entire life in the same area of France. In fact, in her entire life, she only ever lived in four different locations. She reigned as the oldest living human being from 1991 until her death in 1997.

For context, Jeanne was born the same year Jules Verne published The Survivors of the Chancellor, a year before Alexander Graham Bell invented the telephone, and when she was thirteen or so, she met Vincent Van Gogh and said she wasn’t impressed with him (though the details of her meeting with the famed artist changed over the years). Two years after the death of her husband, women got the vote in France—Jeanne was sixty-seven. During her lifetime, twenty different French presidents presided over her country. She died the same year James Cameron’s blockbuster Titanic was released in theatres. That same summer, France was rocked by three deaths actually: Jeanne’s, Princess Diana’s, and Mother Teresa’s.

Jeanne was blind and nearly deaf by the end but remained mentally sharp. At the age of 121 she released two CD’s talking about her life; one in French and one in English. She reportedly hated Communists and her attitude tended towards being a bit stuck up and egotistical at times, but hey, when you live to be that old, you can act however you want.

Her husband died in 1942 after ingesting spoiled cherries. Jeanne’s daughter died in 1934 at the age of thirty-six from pneumonia or tuberculosis and her grandson died in 1963 in a car accident.

Researchers believe her longevity had something to do with Jeanne’s immunity to stress. She took up fencing at the age of eighty-five and rode her bike until she was 100. She ate two pounds of chocolate every week until her doctor made her give it up when she was 117. Jeanne also kept smoking until she was 117.

After she moved into a retirement home, Jeanne received many many visitors and journalists. The attention became so bad one of the nurses, who was supposed to be in charge of caring for her, was transferred to another facility for “failure to observe the obligation of reserve, discretion, and restraint,” (according to The New Yorker). Jeanne died the following year, some claim from boredom. The last months of her life saw her shuttered away from the world, with hardly any visitors and nothing to do. Unfortunately, she ensured her personal papers were destroyed before her death, so large parts of her life will remain a mystery.

In recent years, some folks have decided to challenge Jeanne’s story. Something I can only describe as a conspiracy theory has cropped up, claiming it was actually Jeanne who died in 1934 and not her daughter Yvonne, and that Yvonne simply stole her mother’s identity to avoid paying inheritance taxes. Then she preceded to live a not-quite-so-exceptionally long life and just claimed otherwise. The “researchers” who have put forth this idea don’t seem to be very, well, accredited. It seems to be nothing more than just that, a conspiracy theory, put forward by people who for some reason don’t want to admit a woman could actually live for 122 years. You can read up on the entire investigation in more detail through the first link below.