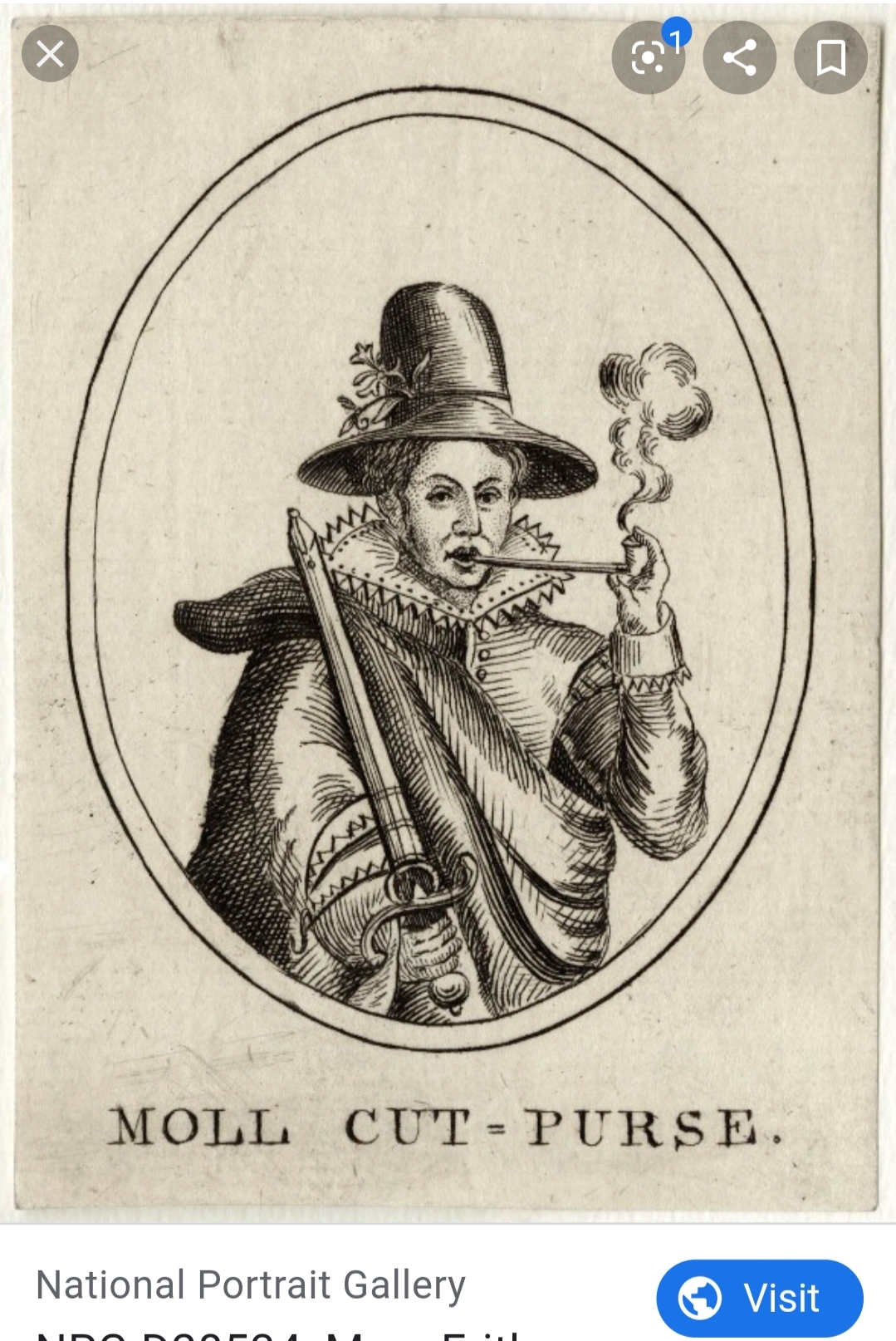 “I please myself and care not else who loves me,” -Moll’s character in the play “The Roaring Girl”

Mary was known for cross dressing, stealing, brokering stolen goods, and entertaining. She first crops up in the historical record in 1600 and again in 1602 after she was caught selling stolen purses. As the years passed, her criminal record expanded alongside her mythical lifestyle.

Most of the “facts” of her life cannot be documented or are highly exaggerated, and today she’s seen as a legend more than her actual historical record. The following are the stories that seem to crop up in all or most of the sources I’ve found, so I am including them as the likely truth of Mary’s life.

When Mary was still a teenager, her family literally tried to send her away—not to a convent or anything like that, but to the New World. That’s right, they tried to ship her off to North America in the hopes of keeping her troubled past and most likely future away from the rest of them. Instead of their plan working, Mary was able to talk her way back off the ship, and she never left England’s shores again.

Eventually Moll began performing onstage in various venues. While she sang, danced, and played her lute (without a license), her friends would steal from the distracted crowds. By 1611, Moll’s fame was so widespread plays were being written about her, including “The Roaring Girl” which portrays Moll as a matchmaker. Moll would appear at times onstage for cameo appearances in this play, and some claim this makes Moll the first English woman to perform in a public theatre (at that time, men would play the roles of both male and female characters onstage). Moll is also considered by some as the first woman in England to smoke; she was famous for her smoking pipe.

That same year, Moll was arrested and sent to a correction house for a few months for her performance work and for daring to dress as a man. By October of the following year, afterpieces, or the kind of performances Moll had become famous for, were completely banned. This was done in an attempt to stop people from pickpocketing off crowds.

Around that same time, Moll apparently decided she wasn’t famous enough. One of her friends made a bet, which Moll gladly accepted. There was a famous dancing horse named Marocco that lived at the time, and Moll’s friend bet that Moll couldn’t ride the horse three miles from Charing Cross to Shoreditch dressed as a man. Moll not only took the bet, but also attached a banner to the back of the horse and played a trumpet as she rode around, ensuring nobody in the area would be able to look away.

In January of 1612 Moll confessed to a number of crimes, including, “flaunting her male attire, blaspheming and swearing, being a drunkard, and keeping lewd and dissolute company, including cutpurses,” (Britannica). Although pressed to admit it, Moll refused to confess to be a prostitute. Even though Moll claimed to have repented, by 1614 she was back at it. This time Moll was actually operating a business; working as a broker for various stolen goods.

This business was actually, kind of legal, in a weird way. Thieves would bring stolen goods and Moll would pay for them, while Moll was also demanding payment when those who had been stolen from came in search of their items. If they wanted their stuff back, Moll demanded a finder’s fee of sorts. The police, meanwhile, would bring petty criminals to Moll because she was so good at interrogating people. Aw, she went full circle!

Moll also claimed to be a committed royalist, that is somehow who approved of the royal family. This position was slightly dangerous considering she lived through the Civil War and the fall of the English Monarchy to the hands of Oliver Cromwell. At one point, Moll is said to have held up the Parliamentarian General and robbed him of 250 gold coins; quite a hefty sum for the day and a sharp thorn in the side of the anti-royalists.

Though Moll was married she might not have ever lived with her husband and he was never mentioned in her will. At one court proceeding, Moll couldn’t even remember how long they had been married. Most likely the reason for her marriage was legal shields. Moll was able to fight off suits against her made in her maiden name since she now went by her husband’s name, and as a married woman she had more protection under the eyes of the law.

Moll died from dropsy (edema), and reportedly asked to be buried face down with her backside pointing up. This was her final F you to the world it seemed. After her death, many biographies cropped up over the centuries. Many of these embellished Moll’s story to the confusing legend we know today.