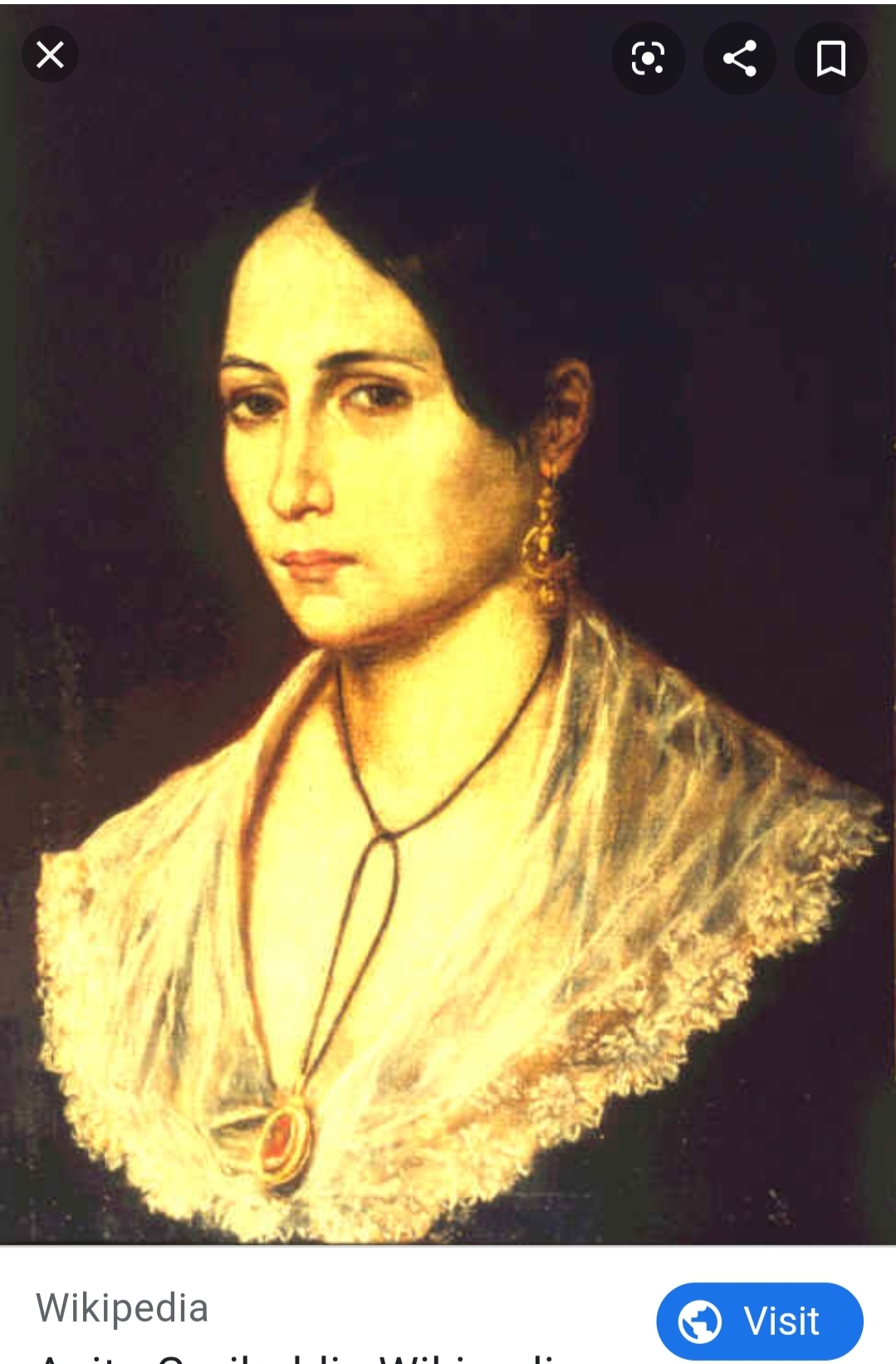 Revolutionary and Comrade in Arms of Giuseppe Garibaldi

Anita’s Revolutionary Husband Giuseppe had some qualms about bringing along his often-pregnant wife on his various exploits across the world, but she quickly quashed them, and is today remembered for fighting for independence and freedom on two continents and in three countries.

Anita was the children of peasants and married for the first time in 1835. Little information about her early life is unknown. She had multiple siblings, but the exact number how many is unknown. After her father’s death when she was small, Anita’s mother moved the children to town of Laguna. Though Anita had no formal education, she was taught to ride a horse like the other children in the village.

According to sources, Anita was vicious and iron-willed. A man who had tried to court her eventually attempted to rape her after Anita refused him. According to this story, Anita whipped him, stole his horse, rode to a police station and reported the attempted rape. Because of her unruliness, Anita’s mother finally married her off when she was fourteen to a twenty-five-year-old shoemaker, who also happened to be an abusive alcoholic.

No one knows for certain what happened to this husband. It is said he joined the Army and left the picture. The pair had been married four years and had no children, so some believe the marriage had gone unconsummated. Others state either Anita or her husband simply abandoned the other. Whatever the reason, by 1839, Anita’s husband was gone, and she was, for all intents and purposes, single. Just in time too, for Giuseppe entered the picture this same year. He was thirty-two and she around eighteen. He was an attractive Italian while she was described as having large eyes and freckles, but even still, it was love at first sight.

By the time the pair met, Giuseppe was already branded a revolutionary. He’d been forced to flee Italy a few years before after being discovered as a nationalist, attempting to unify the Italian states. When he arrived in Rio de Janeiro, Giuseppe’s freedom and independent streak simply found a new host, and he was put in command of a ship to bring down the Brazilian Empire. The Empire was newly free from Portuguese control true but was still corrupt as all get out. The people wanted freedom, and Revolution broke out.

Only months after meeting, Giuseppe was given orders to sail out, and Anita insisted on going with him. Over the next ten years, Anita and Giuseppe would fight for independence across two continents and multiple countries. At their first engagement at Imbituba, Giuseppe tried to get Anita to go belowdecks while the fighting continued. She refused, and event took up a musket and began firing on the enemy. When Anita finally did go belowdecks, she returned moments later towing along other sailors who had gotten scared and tried to hide below. Anita would continue to fight for the next decade. At one battle, Giuseppe was ashore when ships opened fire on his own. The men were scared to engage, so Anita fired the first cannon. Giuseppe said of his wife, “She looked upon battles as a pleasure and the hardships of camp life as a pastime.”

When Anita was pregnant with their first child, she refused to stop fighting. At one point, she was attempting to flee from her enemies when a horse was shot out from under her, and she fell to the ground. Anita was apprehended but escaped from her jailors later that night. She gave birth to their son several months later, in September 1840. The baby, christened Menotti, was born with a scar on his forehead. Giuseppe thought the scar came from Anita’s fall from the horse, but this is unlikely. Twelve days after Menotti was born, the home Anita was resting in was surrounded. Anita took her baby, mounted a horse, and with some of the other men, fled into the woods where they stayed until the danger had gone.

That winter was hard, and the army frequently had little food or supplies. Anita was terrified her son would die like so many of the men, but Menotti hung in there, and the small family made it to their destination. The family arrived in Uruguay in June of 1841, and for a time Giuseppe worked as a math teacher. No one knows why the pair chose to marry at this time (in 1842), but some believe it is because Anita learned of her first husband’s death. However, this cannot be verified, as a death certificate for the man has never been located or any evidence of his existence after 1839.

Soon after the wedding, Anita and Giuseppe were back at it. This time they fought for the Uruguayan Independence fighters against the Argentinian dictator trying to overtake them. For five years, Giuseppe served the Uruguayan government, and Anita gave birth to three more children. Despite the fact Giuseppe continued to rise through the ranks, he was never given a pay raise. The family lived in a single room and shared a kitchen with another family.

Anita did not participate with her husband in the fighting during these years. She also did not help with the safer campaigning work upper class Uruguayan women did, possibly because she found it boring or possibly because she didn’t like the way these other women looked at her husband. She did however sew uniforms and flags for the soldiers, giving Giuseppe’s men the famed red shirts, they came to be known for. By December 1845, Giuseppe was in Salto and Anita was alone with the children. That month, their daughter Rosita died, plunging Anita into a depression.

Giuseppe asked his wife to join him on campaign to get her mind off the death of their daughter. Two years later, in 1847, public opinion had turned the tide in Italy, and Giuseppe was eager to return home.

While pregnant with their fifth child, Anita went to Italy with the children and other wives of Italian Legionaries with the agreement that Giuseppe would soon follow. When Anita arrived in Genoa, she was greeted by cheering crowds, grateful for the Garibaldis help in seeing a free and united Italy, safe from the invading Austrians. For a few months, Anita, her husband, and their family spent time in Italy in relative peace. When Anita and Giuseppe married in 1842, Anita could not read or write, and only managed to learn to sign her name months before her death during those calm months in Italy. But soon after they had settled in for a calm future, fighting broke out, and this time, Anita refused to stay behind.

Menotti was sent to a boarding school while his two still surviving younger siblings stayed with friends in Nice. For a few months, Anita and Giuseppe were together and apart, over and over again, while Giuseppe tried to come up with a plan for who needed his help the most. Finally, Giuseppe persuaded a now pregnant Anita to go home to care for their children.

Instead, Anita returned to Giuseppe soon after. Minutes after her arrival, a cannon blast knocked in the ceiling of the room she and Giuseppe were talking in. Anita wasn’t fazed, and refused to go back to the children, insisting she stay with her husband. She cut her hair short and dressed in men’s clothes, riding out on horseback with Giuseppe and five thousand other soldiers.

The following months became more and more desperate for the soldiers. Desertions skyrocketed, and by the time Giuseppe and Anita arrived at the border to the Republic of San Marino, they only had 1,800 men. Anita was now wearing a dress because of her advanced pregnancy but remained as strong willed and tough as ever. Within a few days, Giuseppe had dissolved his army, leaving every man to themselves. He and the other women in town tried to get Anita to stay while Giuseppe fled, but she refused to stay behind. By then, Anita had grown ill with fever, possibly malaria.

They escaped, but only barely. Most of the men were captured within the next few days, and Anita grew more and more delirious. She asked for water to drink, which her husband did not have to give her. Finally, Giuseppe, Anita, and their single other companion stopped to rest in a corn field. Anita was still speaking of the children, but her thoughts began to ramble and became incoherent. A friend found them, and Giuseppe carried his wife two miles to a farmhouse. Lying in the bed, Anita was able to drink a few sips of water and swallow some soup, but she was fading fast.

It was decided Anita would stay with a doctor while Giuseppe tried to escape, but Anita would hear none of it. She was strong enough still to understand what was being said around her, and after she looked her husband in the eye and whispered, “You want to leave me,” Giuseppe broke, and decided to stay with her. While being transported to another house for a doctor to look after her, Anita and her baby died. Anita was seven months pregnant at the time, making their deaths even more heartbreaking.

Giuseppe was able to escape after quickly burying Anita. Ten years later, with Italy free and unified, Giuseppe returned to his homeland. He ensured Anita was given a proper burial at last and secured her legacy. She is known to some as the Mother of Italy. To others, she is the heroine of multiple revolutionary wars. No matter what you call her, Anita was brave, and she never stopped fighting.

This is an excerpt from Giuseppe’s autobiography; his description of how he met Anita (and before you read, you might want to get some tissues):

By chance I cast my eyes towards the houses on the Barra—a tolerably high hill on the south side of the entrance to the lagoon [of the town of Laguna, Brazil], where a few simple and picturesque dwellings were visible. Outside one of these, by means of the telescope I usually carried with me when on deck, I espied a young woman, and forthwith gave orders for the boat to be got out, as I wished to go ashore. I landed, and, making for the houses where I expected to find the object of my excursion, I had just given up all hope of seeing her again, when I met an inhabitant of the place, whose acquaintance I had made soon after our arrival.

He invited me to take coffee in his house; we entered, and the first person who met my eyes was the damsel who had attracted me ashore. It was Anita, the mother of my children, who shared my life for better, for worse—the wife whose courage I have so often felt the loss of.