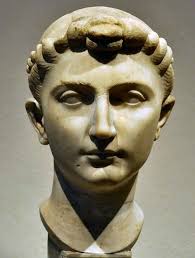 Julia was his only biological child, and unfortunately her parents divorced when Julia was only days (or hours according to some sources) old.

Julia was thoroughly educated and raised by her stepmother to be an aristocrat. She loved reading and was taught to weave and spin as well. Unfortunately, it wasn’t all sunshine and roses as Julia’s father forbid her from speaking with anyone he had not vetted beforehand.

Her first marriage was to her first cousin when she was fourteen; then at age eighteen she was married to the general Agrippa (who was twenty-five years older than her) and they had five children; with her two eldest sons being adopted by Augustus. Julia was married a third time after Agrippa’s death; however, the marriage was an unhappy one for both parties, and not just because their only child died when still a baby.

After the death of their son, Tiberius (Julia’s third husband), voluntarily exiled himself. Julia, now alone and lonely, started a string of affairs that became politically more and more dangerous, including one with Marc Antony’s son.

Once Augustus found out about his daughter’s adultery, he banished her to Pandateria. Soon after, Julia was moved to Rhegium, still exiled. Once her husband Tiberius became emperor, he cut off her allowance, and Julia eventually starved to death. Only one child outlived her; a daughter who also died in exile.

Julia was remembered for being kind and that made her popular, however, her father never forgave her, and even referred to her as a “Disease in my flesh.”