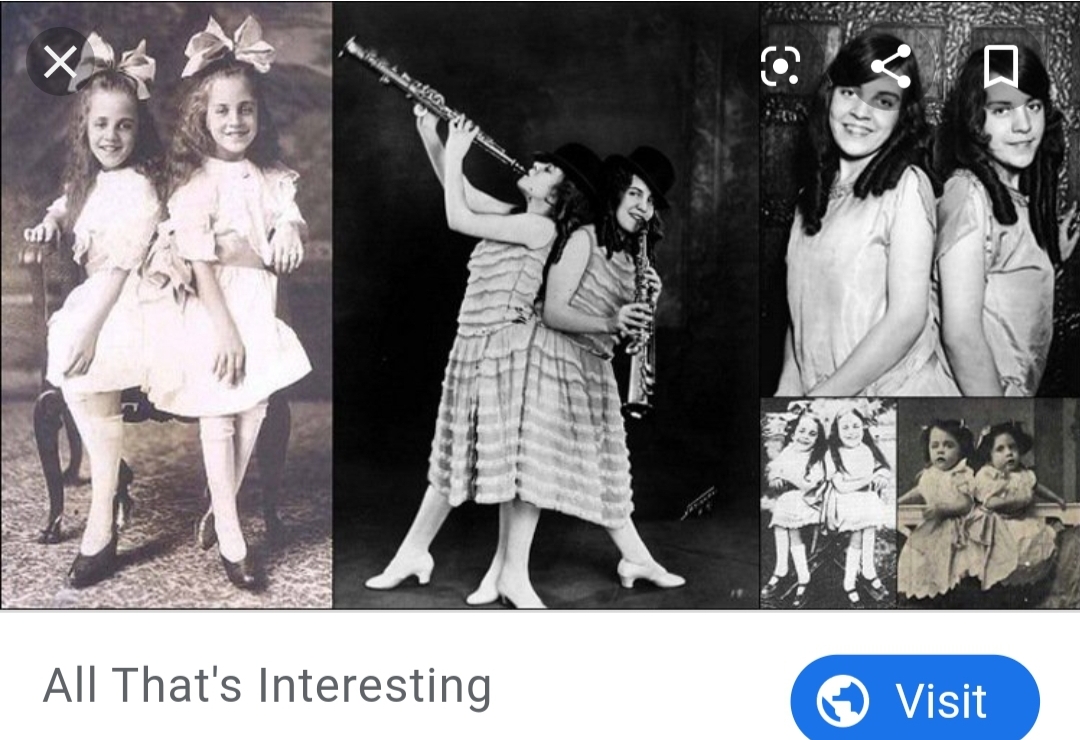 Conjoined Twin with Her Sister Daisy

Daisy and Violet were born to an unmarried woman and were pygopagus twins; meaning they were joined at the hips and fused at the pelvis. They shared blood circulation but no major organs and were the first conjoined twins born in England to live more than a few weeks.

Their mother rejected them and so they were unofficially adopted (read: purchased) by the midwife who helped bring them into the world, Mary Hilton, called “Auntie” by the girls.

By the time the girls were three years old they were being toured around the United Kingdom and then Germany and Austria; finally, they were brought to the United States and tutored in singing, dancing, piano, violin, clarinet, and other schooling lessons. At first, the girls were denied entry to the US because they were medically unfit by the immigration standards of the day; however, after Mary created a media circus about their situation, the United States officially allowed the twins to enter the states.

They started their Vaudeville career where they began earning $5,000 a week, but they didn’t see any of the money as it went straight to their managers. If the girls didn’t comply with their managers’ (or owners’, as they viewed them) demands, they were beaten and threatened with being institutionalized. In 1931, the twins sued their manager for their freedom (on the advice of Harry Houdini) and also won $100,000 in damages. The twins even had a small part of the Hollywood film Freaks.

Violet got engaged but twenty-one states turned her and her fiancé down for a marriage license on morality grounds before she finally married someone else in a publicity stunt in Texas. The public turned against her and her sister when their annulment was announced almost immediately.

By the late 1950’s, the girls were completely broke, and their manager stole all their money. The small town they were abandoned in took them in and allowed them to live in a trailer and let them work as produce clerks in a supermarket.

They were buried in a single coffin in a donated burial plot, and even share a profile page on Find a Grave, bound together, even in forever.

A documentary about the twins entitled Bound By Flesh was released in 2014.