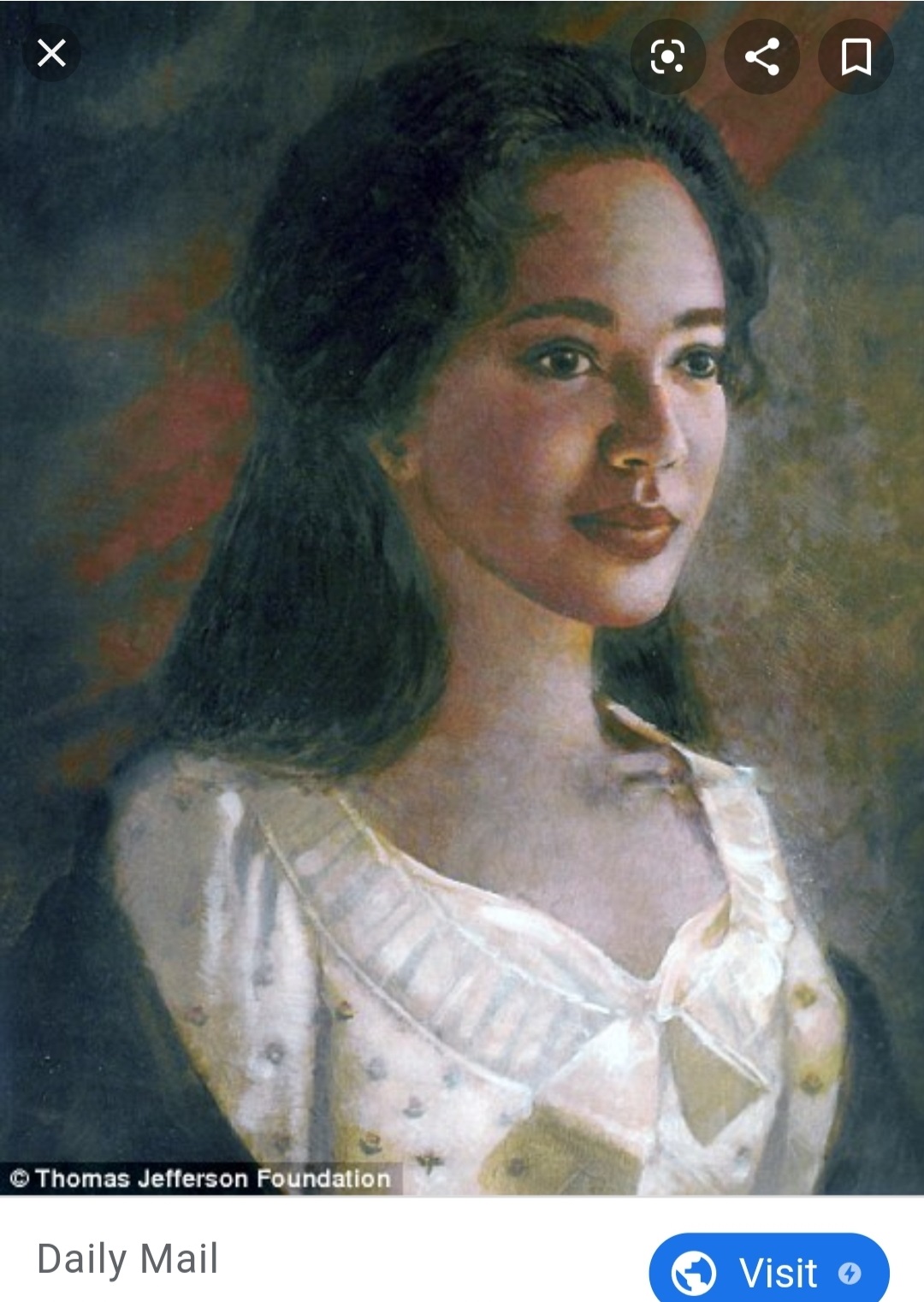 “Madison Hemings said very little about what his mother thought of his father, only that she “implicitly relied” on Jefferson’s promise. Hemings also said that he and his siblings “were the only children of [Jefferson’s] by a slave woman.”” -Courtesy of Monticello.org

Sally was a slave; the half-sister and ladies’ maid of Thomas Jefferson’s wife, Martha Wayles Jefferson.

While DNA has definitively proved a link between Sally’s known children and someone from the male Jefferson family line; nearly infallibly proving their relationship, some naysayers still deny and insist the children belong to Jefferson’s brother. The truth will not be definitely determined unless there are far superior advancements in DNA sequencing and identifying. However, it should be noted that since 1802, historical documents have appeared throughout our nation’s history claiming the relationship between Sally and Thomas was in fact real. Thomas himself never recognized Sally or her children as his family, and his white descendants went on to deny that a relationship between them ever produced children.

Little is known of Sally’s early life. She arrived at Monticello as part of an inheritance founding father Thomas Jefferson received upon the marriage of Sally’s half-sister Martha. From a young age, Sally acted as a nursemaid to her own niece; though that relationship would not be what it is today. Sally may have been Martha’s sister, but because she was Mulatto, and enslaved, she was not seen as part of the family in the way we view family relationships in the modern day.

In the 1780’s, Sally was chosen to go to Paris to act as a lady’s maid to Thomas’s daughter Maria. While there, she learned to speak French and was taught needlework. It is not known if Sally was able to read or write in either English or French. She was also inoculated against smallpox while there. According to Madison, Sally’s son, Thomas made Sally his concubine while in France (Madison also claimed to be Thomas’s son, alongside his other siblings).

Over the course of his life, Jefferson freed all of Sally’s children (that may have been his children [her daughters in the 1820’s and her sons in his Will]) and Sally herself was “considered” free as well (though not legally so) thanks to an agreement Sally had made with Jefferson at the age of sixteen, before she agreed to come back from France. Sally agreed to return to slavery in Virginia when Thomas went back there in exchange for “extraordinary privileges” for herself and any children she would have some day. These facts are confirmed by the official Monticello website, the historical home of Thomas Jefferson (linked below).

Thomas Jefferson did not free any other enslaved family unit in its entirety. Two of Sally’s children, Beverly and Harriet, left the plantation without ever being “legally” freed, however they were both able to “pass”; meaning they integrated into white society without ever being suspected of being part African American. In the 1830 census, Sally and her other two living children were listed as white. In 1833, Sally would claim to be a free-Mulatto. The location of her gravesite has been lost to history.

Eston and Madison, Sally’s sons, would claim throughout their life to be the sons of Thomas Jefferson. Madison chose to remain within the African American community, while Eston switched his racial identity to white and also changed his surname to Jefferson around the same time. Today, descendants of both Eston and Madison have been located. However, any descendants of Beverly and Harriet have been lost to history because they chose to pass into white society and eliminate any information leading back to where they came from.

There are no confirmed images of Sally Hemings from when she was alive; nor are there surviving images of her children. The image I have chosen to use here in this article is widely distributed across the internet and is very prevalent under the Sally Hemings search results on Google Images, but it is important to note that this is not actually an image of Sally from when she was alive. Therefore, we do not know what Sally looked like, or her skin color. She was undeniably part African, but if oral stories are correct, Sally’s mother was mixed race, as well as Sally herself, and this would definitely help her children pass into white society.

It is also important to remember that we cannot simply see Sally and Thomas’s relationship as a love story, or one of forced sex or rape. Slaves did not own their own bodies and were not able to say no to any of their master’s desires. For this reason, some believe Sally dealt with four decades of rape and abuse at the hands of Thomas Jefferson. However, others believe theirs was a love story that had to be hidden because of racial prejudices of the time. Just like with knowing the truth of Sally’s children’s father, we will also never know the truth behind her relationship with her master.

The Plantation Mistress by Catherine Clinton