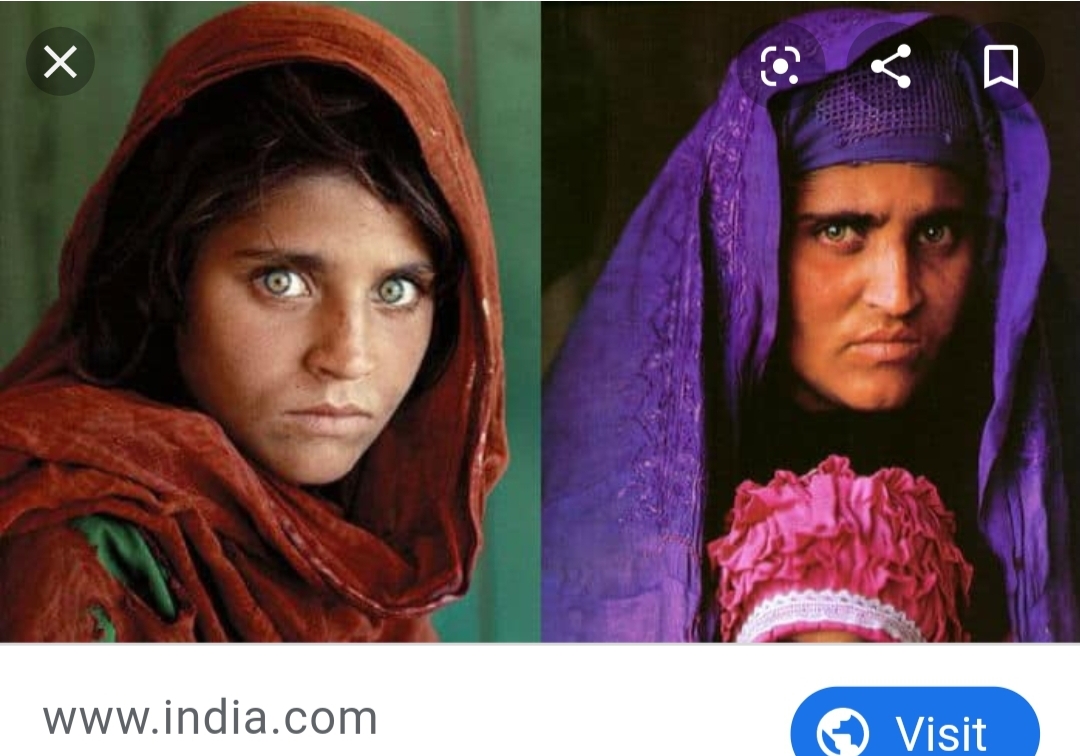 “I didn’t think the photograph of the girl would be different from anything else I shot that day,” -Steve McCurry, the Photographer

The above photographs were both taken by McCurry, in 1984 and 2002, respectively

Subject of The Afghan Girl Photograph

The photo would also serve as the cover of National Geographic Magazine; for lack of a better term it “went viral” worldwide in 1985 when Sharbat was twelve years old.

Sharbat was uncomfortable having her picture taken. The man who took the photo was a stranger, first of all, and she had never had her picture taken before, or until the photographer met her again in 2002. Taken in 1984 and published in 1985, for seventeen years no one knew the name of the girl in the portrait, or if she was even still alive.

Sharbat had been living in a refugee camp in Pakistan, but by 2002 had returned to her native Afghanistan. She became a refugee after the Soviets invaded her home country and killed her parents in a bombing raid when she was around six years old. Sharbat is descended from the Pashtun tribe, and does not know her own birth date, can only estimate on the year.

Sharbat is now a mother of two living children (a fourth died as a baby and her oldest died in childbirth) and was suffering from Hepatitis C in the early 2010’s (the same disease that killed her husband). According to a 2002 National Geographic article, Sharbat remembers being married at thirteen, but her husband claims she was sixteen. Either way, the match was an arranged marriage.

In 2016, Sharbat was arrested by the Pakistani government for possessing false identifying documents. She faced between seven and fourteen years in prison and a fine between $3,000 and $5,000. After spending two weeks under arrest, Pakistan released her and returned her and her children to Afghanistan.

In 2017—after spending thirty years as a refugee, the Afghanistan government deeded her a three-thousand-foot house and $700 per month stipend to help pay for living expenses.

The deed to her home puts her in the 17% of Afghani Women who own their own homes. Sharbat can sign her name, but as of 2002 was unable to read or write. She had high hopes her daughters would be able to finish school, and now Afghanistan is promising to make that happen. Sharbat’s home also has to have security, as her family are worried her fame from the National Geographic cover could anger more conservative Muslims, who do not approve of women appearing in media.

In 2021, after the Taliban retook control of Afghanistan, Sharbat was evacuated from the country and managed to make it to Rome, Italy. Whether or not she plans to stay in Italy is unknown at this time, but because of how well-known Sharbat is, the international community knew she was no longer safe in her native country with the Taliban in charge.