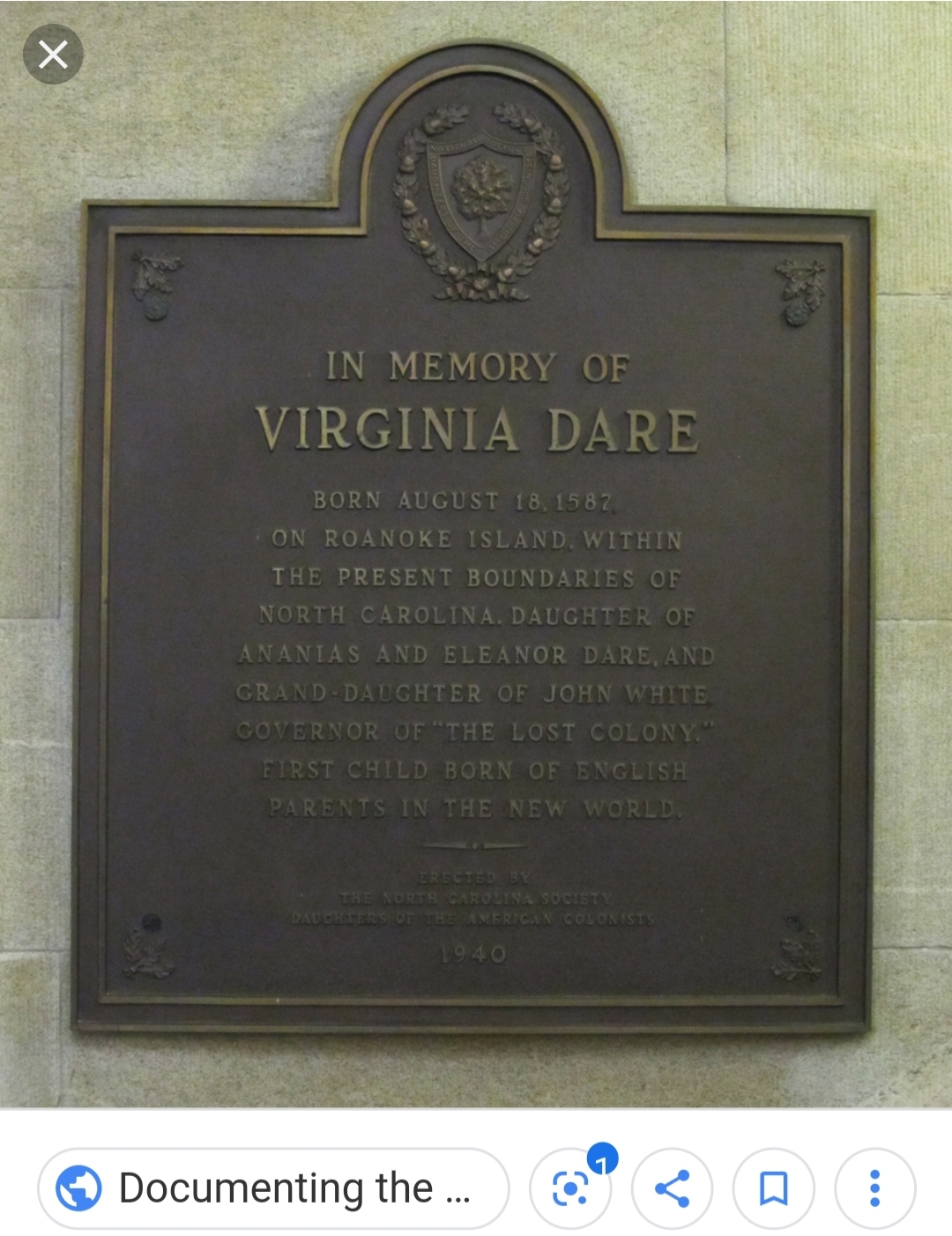 Let's focus on Virginia for this one, shall we?

Unfortunately for her, Virginia was born in the doomed colony of Roanoke. Her mother was Elinor White Dare—the daughter of the colony’s governor John White.

Nine days after Virginia was born her grandfather returned to England for supplies for the newly settled colony. What happened next is one of the biggest mysteries of all time.

Three years after he left, John White returned to find the settlement on Roanoke Island practically the same as he left it—only it was completely abandoned. No one was around and the only sign that anything was amiss were the mysteries letters “CRO” and the word “CROATOAN” carved in a tree and a fence within the colony. Croatoan was the name of a local Native Tribe.

The best explanation anyone can think of today is that some kind of illness or plague hit the Colony in that three year gap and that the survivors were absorbed into the Native Tribe, but the men with John White insisted he either get left behind or return to England with them and so he never got the opportunity to investigate and the mystery was never solved.

In 1937 the first Dare Stone was located along the Carolina Coast—the twenty-one pound rock is carved with a message possibly written by Virginia’s mother Elinor. However, a random guy started making a whole bunch of fake stones (it was the Depression after all and he wanted money) so now the one “true” Dare Stone is discounted by many. Whether or not the stone was actually carved by Elinor remains up to debate, as is the eventual fate of the colonists themselves.

The first permanent English settlement in the New World had failed, and nearly five hundred years later, historians, archaeologists, and history buffs are still puzzled over what little we do know. The mystery is so popular it was even covered in the hit BBC show Doctor Who.

One other thing I'd like to mention briefly; something that irks my nerves and points out why I decided to go with the moniker of "The Exasperated Historian." In 2018, the Washington Post put out an article saying Virginia Dare is now being used as a symbol of White Supremacists...Besides the fact that I have yet to see any proof of this being true, it also gives me a bad taste in my mouth. In all likelihood, Virginia died before ever reaching adulthood. And now, nearly five hundred years later, journalists are propping up and actual child and linking her to horrible individuals for absolutely no reason other than that Virginia was English and Caucasian. How about we just leave children out of headlines as much as possible, both historical and living in the present?

Anyway, to get back on track; if you are interested in learning two not-at-all-plausible explanation for Virginia Dare's fate, you can read about her in two different historical fiction/fantasy young adult series. The first is The Missing by Margaret Peterson Haddix (Virginia is featured in book three--Sabotaged). The next series I would recommend is called The Secrets of the Immortal Nicholas Flamel by Michael Scott. Virginia Dare is a supporting character throughout the series.

The Secrets of the Immortal Nicholas Flamel series by Michael Scott