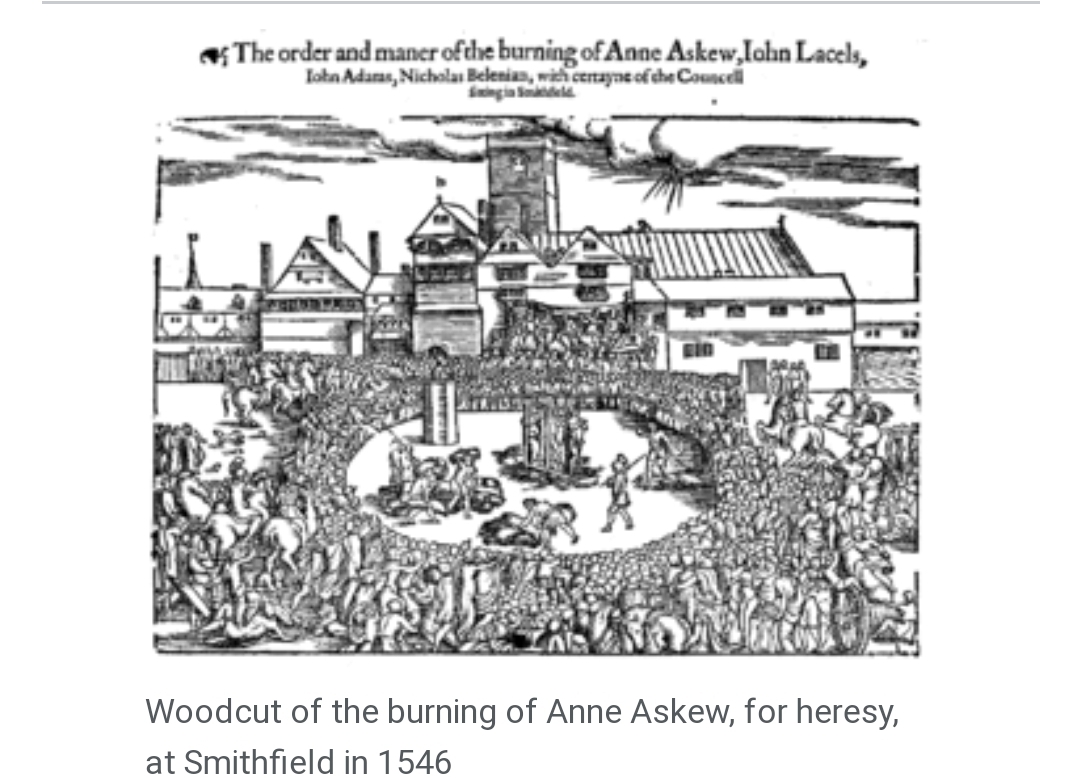 “I said that I would rather die than break my faith."

One of England’s Most Famous Martyrs

Anne was raised in a fairly well-to-do English family. She was educated by tutors at home and at the age of fifteen was forcibly married off by her family, though she reportedly spited her husband by refusing to take his name (yet they still had two children together according to one source). Anne’s husband was devoutly Catholic, but Anne, who had read the Bible and knew the teachings of Martin Luther, was a Protestant. Anne also believed she had the right to divorce her husband.

In 1544, Anne traveled to London in order to appear before the king and request a divorce from her husband. This was obviously denied her, and spies were reportedly sent to watch Anne’s every move as she continued to live in London.

In March of 1545, Anne was arrested on the charge of heresy after she was found in possession of a book written by a Protestant reformer—who had been executed over a decade before for heresy. After twelve days, Anne sighed a confession and was released from prison. She moved back home, away from London and the intrigue of court.

In May of the following year, Anne was arrested again, alongside twenty-two other people suspected of heresy. This was all a part of a political plot to try and undermine Katherine Parr, the king’s sixth wife, who was also a prominent Protestant.

Anne was imprisoned and tortured in the Tower of London. The goal was to try and get Anne to admit the queen, Katherine Parr, was a heretic. Anne was placed upon the rack and tortured repeatedly, but she refused to name anyone who might also be a protestant. At the time, it was illegal to torture a woman in such a manner in England.

Anne survived her torture and was able to record her thoughts on the ordeal afterwards in an oral history. Two men would later write down versions of her tale. Sadly, her refusal to talk did not spare Anne’s life.

She was eventually burned at the stake for being a Heretic. Her body was so battered from the torture she had to be carried to the stake on a chair. She was then placed upon another chair and strapped to it in order for her to stay upright throughout the actual burning. The executioner took pity on Anne and hung a bag of gunpowder around her neck in order to help her die faster. Three other men were executed at the same time.