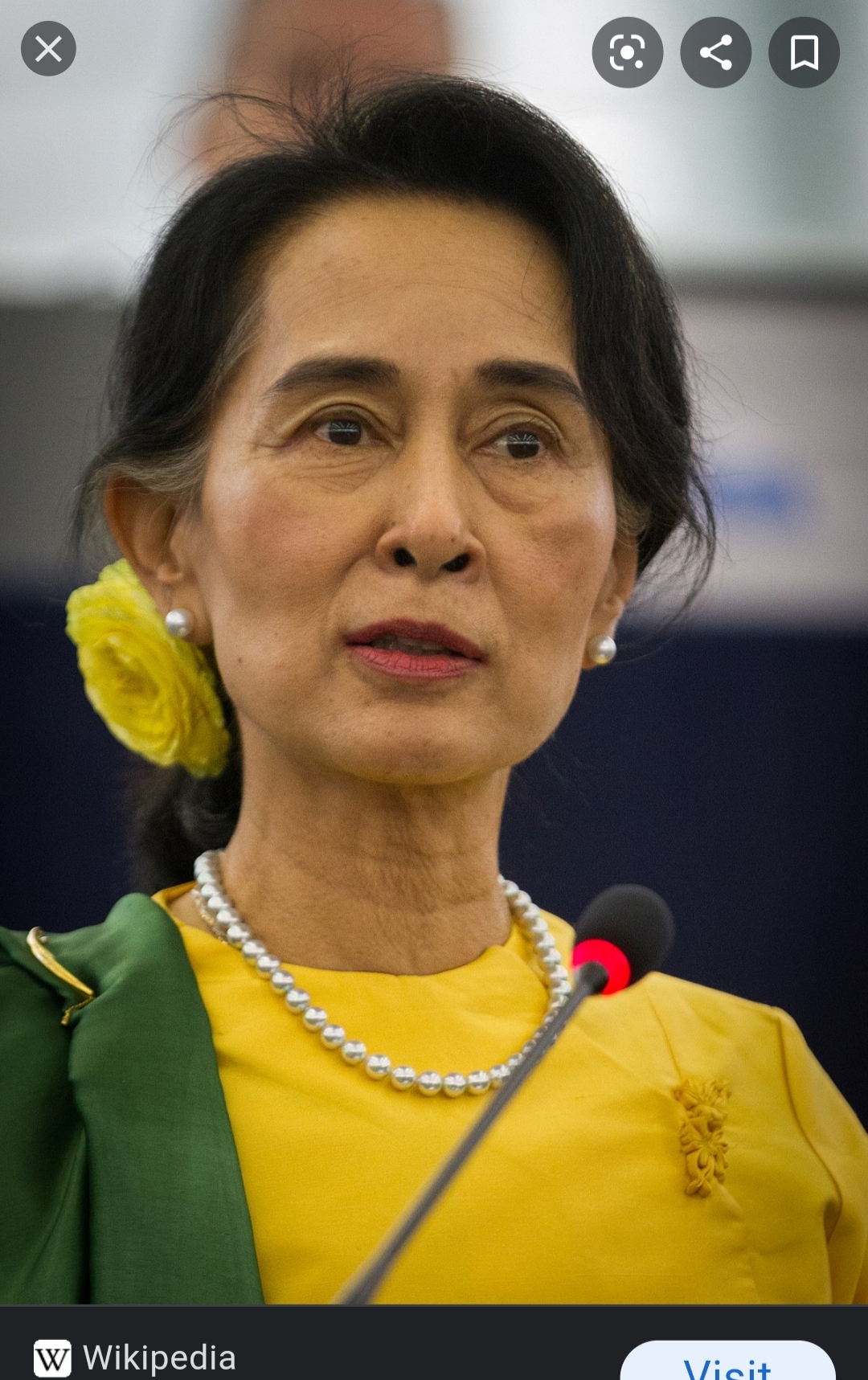 The First State Counsellor of Myanmar

Aung is the daughter of Myanmar’s political democratic icon General Aung San. Just before Myanmar gained independence from the United Kingdom in 1948, the general was assassinated. Aung was only two years old when her father was killed. In 1960, Aung’s mother was named ambassador to India, and the pair moved to Delhi.

In 1964, Aung moved to the United Kingdom in order to study at Oxford. While there, she met her husband, a British citizen. The couple eventually had two children. In 1988, Aung moved back to Myanmar in order to care for her sick mother. Unfortunately, by then, Myanmar was in the midst of a major political upheaval. Within months, Aung had taken to the streets to lead those rising up and demanding democratic reform. The following year, Aung was arrested and placed under house arrest after the military seized control of the country.

In May 1990, elections were held. Aung’s party won fairly, but the military refused to hand over control. In 1991, Aung was awarded the Nobel Peace Prize while still under house arrest. Four years later she was set free, only to be placed under house arrest again in 2000 after defying travel restrictions she had been placed under. Her husband died of cancer in 1999, but Aung had not left Myanmar to be with him for fear the government would not allow her to return home after he had passed.

In May 2002, Aung was finally released from house arrest for the final time*. Sadly, a year later she was threatened all over again when a government backed mob attacked her convoy in the north of the country. Aung managed to escape thanks to her driver’s quick thinking, but many of her supporters were beaten and killed.

*Remember how I said the final time? Yeah, well that’s technically true. However, the government continued to force her to remain in her home or face consequences for several years onward still.

In 2010, Aung was not allowed to participate in her country’s election cycle, but she was released from house arrest six days later. One of her son’s was allowed to visit her for the first time in a decade that same year. In April 2012, her party managed to secure forty-three of the forty-five seats available. Aung was able to take a position as an MP and an opposition leader. She left Myanmar for the first time in twenty-four years the following year but was thankfully allowed to return after.

In 2015, Aung and her party won several prominent government positions during a new round of elections (the first since the military had relinquished control of the government entirely). Aung herself could not become president because of a clause in Myanmar’s constitution that bars someone from becoming president if they have children who are foreign nationals (Aung’s sons are British citizens). However, it was widely known that Aung was de-facto leader despite not holding the title; Aung instead was known officially as the State Counsellor. In 2020, Aung’s party once again won a landslide majority of votes in the country’s second round of elections.

Aung remains immensely popular with Myanmar’s majority Buddhist population, but her international appeal fell sharply after it was revealed how horribly she has handled the Rohingya Muslim migration crisis and genocide within her country. In 2017, hundreds of thousands of Rohingya Muslims fled to neighboring Bangladesh in order to escape military persecution. Because of the crisis, Myanmar is now under investigation for genocide and crimes against humanity by the International Justice Court and the International Criminal Court. Aung herself came under fire from the international community because of her refusal to speak out or do anything, say anything, to stop the military from committing these atrocities. Her international reputation only worsened when Aung actually defended the military’s actions at an ICJ hearing in the Hague.

Democratic progress in Myanmar slowed to a crawl by 2018. Aung and her government prosecuted journalists and cracked down on anyone speaking out against the military or her government. She also described the military generals in her cabinet as being “rather sweet.” Not exactly something you want to hear about a group that held the country—and Aung for that matter—literally hostage for decades.

In February of 2021 a military coup overthrew the government and imprisoned Aung. The military had continued to wield immense power ever since they stepped back in 2015, as evidenced by several members holding key positions in the cabinet. After the 2020 elections, the military claimed major fraud had taken place in the course of the election. On the day parliament was supposed to sit for the first time, Aung was arrested and the country was thrown into a state of emergency. As of October, it is believed the military has killed over eight hundred citizens and detained five thousand more.

In October 2021, Aung's lawyer announced he had been put under a gag order and could no longer offer any updates on his client or her wellbeing. Aung is being held in an undisclosed location and has been charged with several offenses, including: incitement to cause public alarm, violating the Official Secrets Act, illegally importing two-way radios, corruption, and breaking coronavirus protocols. If convicted of these charges, Aung could face decades in prison. For a woman her age, that’s basically a sentence of living out the remainder of her life in prison. And this time, it won’t be house arrest.

The military leaders have promised to hold an election in August of 2023. Several smaller political groups have banded together and may go to war against the military to try and win back control of their country.