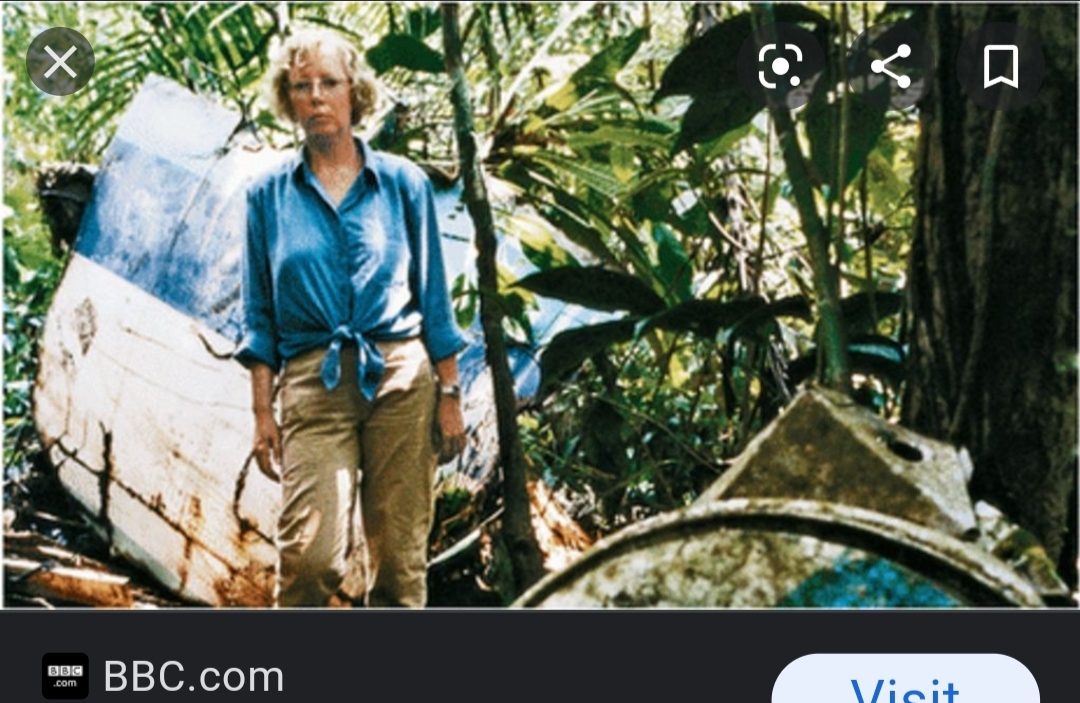 “The next thing I knew, I was no longer inside the cabin. I hadn’t left the plane; the plane had left me.”

The Only Survivor of LANSA Flight 508

At the time of the flight, Juliane was seventeen. Her mother and all of the other passengers and crew perished after the plane fell more than two miles to the jungle floor after being struck by lightning.

As of 2021, LANSA Flight 508 remains the deadliest crash in aviation history as a result of a lightning strike (ninety-one people died). LANSA itself didn’t have the greatest travel record, with two previous crashes already in their history. The flight itself also took off several hours late and was only supposed to last an hour. The first twenty-five minutes of the flight were completely ordinary, but then the turbulence hit, and before Juliane could blink, the plane had broken apart in midair.

The saddest part? The crash happened on Christmas Eve in 1971, meaning Juliane not only had to live with knowing her mother was dead, but she also spent the holiday alone struggling to survive. When she came to on Christmas Day, Juliane found herself in the middle of the plane’s wreckage. She had some cuts and bruises, a broken collarbone, and a torn ligament in her knee, but she could walk, and that was what truly mattered.

Juliane had been living in the rainforest on and off for the past three years with her parents who were researchers. She had no way of knowing it before the crash, but that year spent in the jungle would also help ensure her survival. Unlike a lost tourist, Juliane knew how to navigate the dense forest canopy, where to find food and shelter, and which animals and plants to avoid in order to stay alive.

Juliane definitely wasn’t dressed for a forest adventure either. She was wearing a mini dress and had lost one of her shoes as well as her glasses. Four days after the crash, Juliane encountered the first bodies from the wreck. The crash sight was so spread out across the dense forest floor it had taken her that long to come across any other passengers.

After ten days, Juliane was delirious from hunger and thirst. She thought she was hallucinating when she came across a boat, but realized after touching it that the boat was in fact real. Juliane didn’t find anyone near the but or the hut erected close by that night, but decided to spend the night in the hopes of coming across someone. She managed to treat an infected wound in her arm by putting gasoline into it, and come morning was awoken by the sound of several men’s voices.

The men were stunned by Juliane’s appearance to say the least. A petite blonde white girl in the middle of the Amazonian rainforest? But after she explained to them what had happened to her (in Spanish), they fed her and helped treat her wounds. The next day the men drove her back to civilization.

Juliane was finally reunited with her father, but her mother was still classified as missing. On January twelfth, her mother’s body was located on the forest floor. After an autopsy was conducted, investigators were able to prove Juliane’s mother had survived the initial crash but was badly wounded. She died several days later, most likely in agonizing pain.

Over fifty years after the crash, Juliane still spend part of her time in Peru, running the research station her parents founded. Today, Panguana, that same research base, is the oldest biological research station in Peru. The base has expanded over the years from just over four hundred acres to now covering 4,000. According to the New York Times, “the preserve is home to more than 500 species of trees (16 of them palms), 160 types of reptiles and amphibians, 100 different kinds of fish, seven varieties of monkey and 380 bird species,” (article linked below). Fifty-six separate species of bats live on the preserve, a remarkable feat considering only twenty-seven exist in the entirety of Europe.

The rest of the time Juliane lives in Munich, having recently retired from her job as deputy director of the Bavarian State Collection of Zoology. After the crash, she moved to Germany and earned her doctoral degree biology.

In 1989, Juliane married an entomologist whose main study is parasitic wasps.

In 1998, Juliane returned to the scene of the crash after being approached by a German filmmaker for a made for television documentary. She published her memoir, “I Fell From the Sky” in Germany in 2011.

Juliane’s mother, Maria, was also a biologist. Four different species of Peruvian wildlife have been named in her honor.