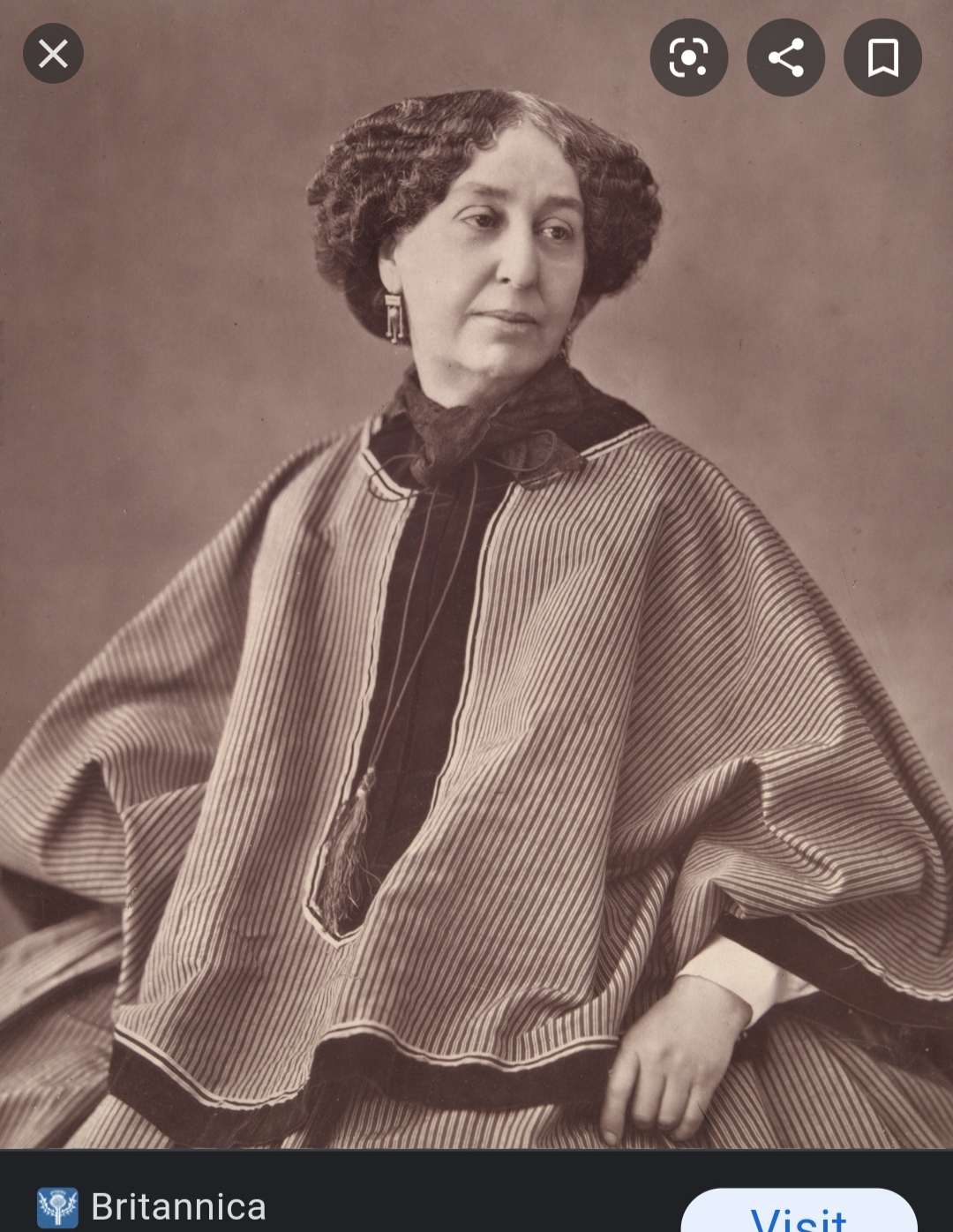 “There is only one happiness in life, to love and be loved.”

“The world will know and understand me someday. But if that day does not arrive, it does not greatly matter. I shall have opened the way for other women.”

George was known for her confidence, feminist writing, androgyny, and sexuality.

She wrote about women being trapped in unhappy marriages per the social climate of the time, as well as other topics about conventional womanhood that made her stand out from the crowd.

George was initially raised in the countryside at her grandmother’s estate after her father died when she was four, but she was eventually sent to a Paris convent school.

According to Notable Biographies, (article linked below): To save [George] from mysticism (the belief that communication with God can be achieved through spiritual insight), her grandmother called her to her home. Here [George] studied nature, practiced medicine on the peasants (poor, working class), read from the philosophers of all ages, and developed a passion for the works of French writer François René Chateaubriand (1768–1848). Her colorful tutor encouraged her to wear men's clothing while horseback riding, and she galloped through the countryside in trousers and a loose shirt, free, wild, and in love with nature.

In 1822, George married a man named Casmir, and though the marriage was happy enough in the beginning, George soon became bored with her conventional life and began having an affair with one of her neighbors. By then, George had become mistress of her grandmother’s estate after her grandmother had died, and so George was already set apart from the standard woman of her day.

In January 1831, George left home and moved to Paris to begin her literary degree. The following year, she officially took up the pseudonym George in time for her first novel’s publication: Indiana. After a few years, George and her husband received a legal separation and disillusion of their marriage. George retained custody of their daughter Solange, while Casimir took custody of their second child, a son named Maurice.

Over the years she had several affairs with various men (including the composer Chopin [and according to some sources, an unconfirmed affair with the female actress Marie Dorval as well]) and continued to publish a multitude of novels as well. George even managed to write several plays, pen various political works, and worked as a literary critic as well. She eventually became one of the most successful female authors of the nineteenth century. Elizabeth Barrett Browning wrote a poem entitled “George Sand: A Desire” in a clear nod and homage to George.

George was also known, as previously stated, for her androgyny. George was known to nearly always dress in male attire; men’s pants were more comfortable than a crinoline when traveling, and George just preferred men’s clothing in general. She was also known to smoke cigars in public, and loved to take her hookah pipe on the road with her as well.

In the last years of her life, she switched to writing her “rustic novels”, which her inspired by her love of her early childhood on her grandmother’s estate. She also wrote an autobiography as well as a book of stories for her grandchildren. Though she died at her home estate of Nohant, rumors first began to circulate in 2004 that George’s remains might one day be moved to the Pantheon in Paris. However, as of July 2021, those plans have never moved beyond anything other than a rumor.