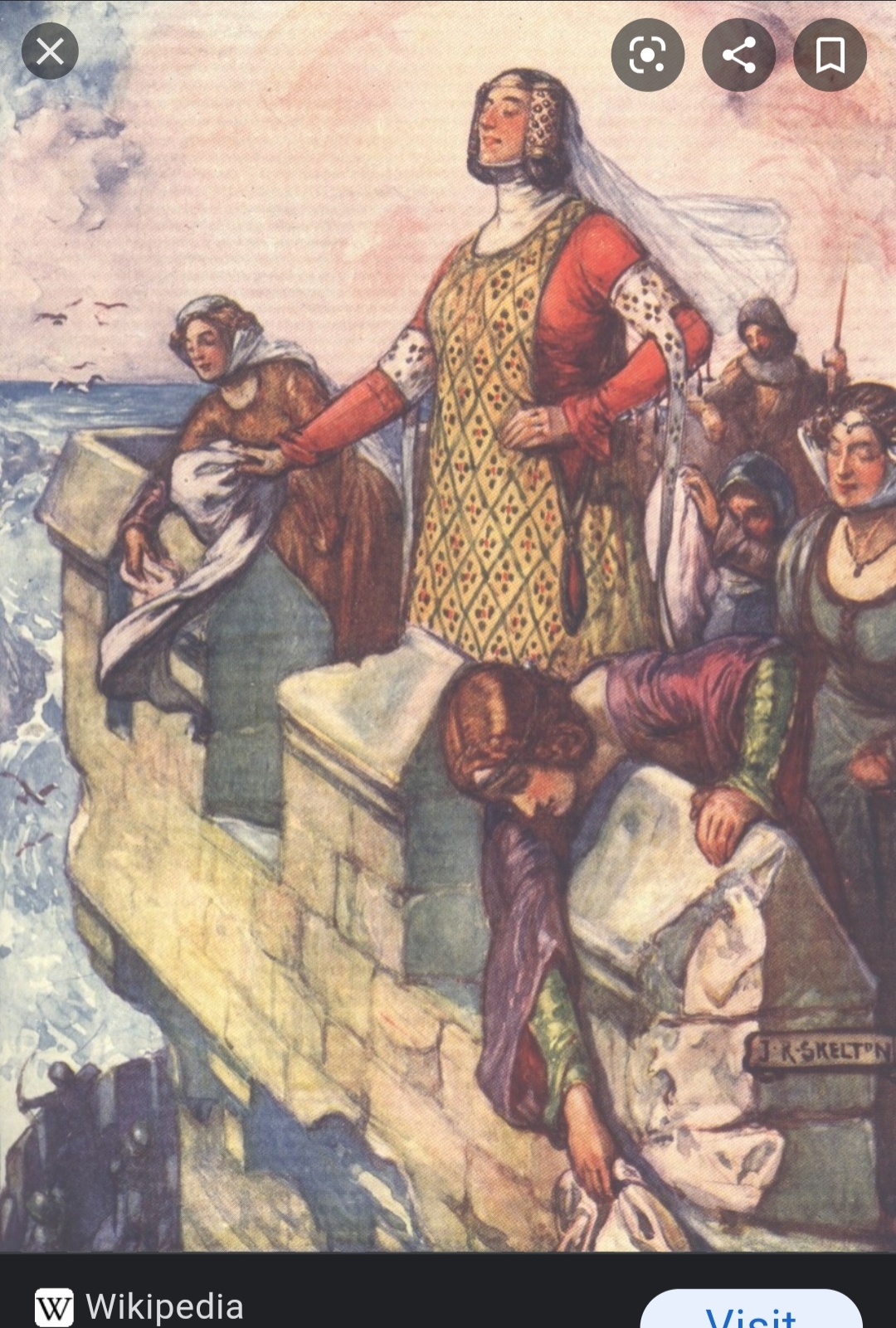 Agnes was the Countess of Dunbar and March. She also held the following (according to her WikiTree profile): From her brothers she obtained by inheritance the Isle of Man, the Lordship of Annandale, the baronies of Morton and Tibbers in Nithsdale, Mordington, Longformacus, and Duns, in Berwickshire; Mochrum in Galloway, Cumnock in Ayrshire, and Blantyre in Clydesdale.

The year was 1338, and twenty-four years earlier the formidable Robert the Bruce had driven the English from Scotland’s lands. However, the English had never taken that slight lightly and returned to Scotland intent on taking the kingdom once and for all.

Unfortunately for them, Agnes got in their way (and was evidently one of Robert the Bruce’s great-nieces through her father, according to one source).

The English assumed Dunbar Castle would be relatively easy to take. After all, its lord, Patrick, the Earl of Dunbar and March, wasn’t home at the time. Instead, he was fighting for the Scottish Army in the North, leaving the castle in his twenty-six-year-old second wife’s hands.

Known as Black Agnes because of her darker complexion and hair, Agnes wasn’t the diminutive wife the English were expecting her to be. When asked to surrender her home, Agnes’s response was (supposedly):

‘Of Scotland’s King I haud my house,

He pays me meat and fee,

And I will keep my gude auld house,

While my house will keep me.’

According to Historic UK (article linked below): The Earl of Salisbury, the English commander, opened the siege by hurling huge rocks at the walls of the castle using great catapults. Between these attacks, and in clear view of the English, Agnes sent her maids dressed in their Sunday finest onto the ramparts to dust and clean the marks of the shot from the walls with their dainty white handkerchiefs.

When his initial plan failed, the Earl of Salisbury next unveiled a large battering ram with which he hoped to break open the walls to the castle. Agnes, upon seeing the battering ram, responded by having large boulders dropped on it. The battering ram was destroyed and the Englishmen who had survived the onslaught ran for it.

The siege dragged on for five long months, all through the winter and into spring. Just when the English hoped for a surrender, the castle was resupplied by two boats that entered through a half-submerged concealed doorway. As the story goes, Agnes had a bottle of wine and a loaf of freshly baked bread delivered to the Earl of Salisbury come the next morning.

Soon after, Agnes’s brother (who had previously been captured and was held by the English) was delivered to the frontlines of the siege. The Earl of Salisbury announced that if Agnes did not surrender the castle, they would kill her brother. Agnes reportedly told the English to go right ahead. Her brother, The Earl of Moray, had no children of his own. Therefore, should he die, Agnes would inherit the title.

Sounds cold, but the ploy worked. The English did not execute Agnes’s brother after all.

Finally, in early June, the English gave up and marched away, realizing they would never get the better of Agnes.

After the siege she fades from history. Today, historians don’t know if Agnes or Patrick had any children, and if they did, if they outlived their parents. One source states that their shared titles passed down to Agnes’s sister and Patrick’s brother, the two of whom had married themselves.

Not much of Dunbar Castle survives to present day, but there are a few ruins—mostly bricks on a small patch of green earth. The source I found that goes into further details about the Castle also noted that an apparition has been seen on the castle grounds; a ghostly figure of a woman reportedly claimed to be that of Black Agnes herself. It seems that, even seven hundred and fifty-odd years after her death Agnes continues to defend her home.

The Warrior Queens by Antoina Fraser