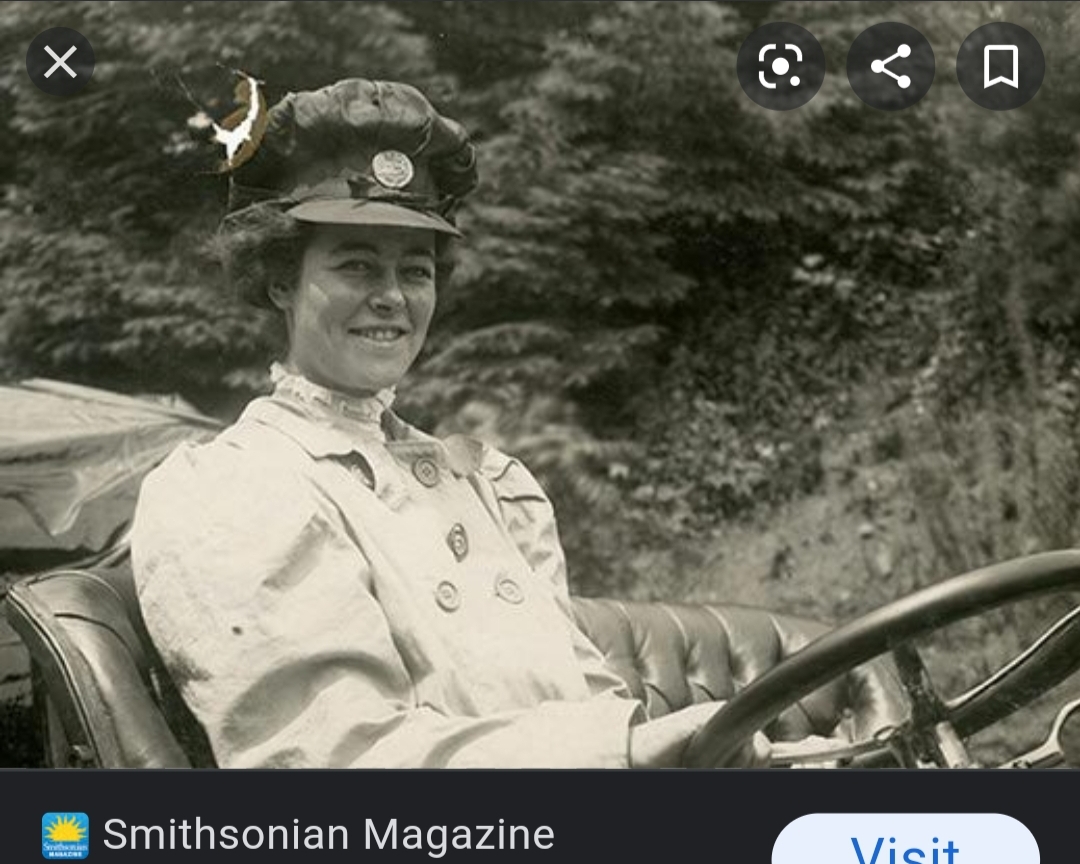 Alice’s drive was from New York to San Francisco in 1909 (the first male cross-country drive was first completed in 1903). The drive took fifty-nine days and stretched on for 3,800 miles. At the time, Alice was only twenty-two years old. Quite impressive given the time period. Her car itself was described by Smithsonian as being, “a dark-green, four-cylinder, 30-horsepower 1909 Maxwell DA, a touring car with two bench seats and a removable pantasote roof.” The car had also been retrofitted to contain a twenty-gallon fuel tank, specifically for the journey.

Even more impressive? The trip was undertaken by Alice and three female friends, alone. This was America’s first all-girl car trip; no boys allowed. To be fair, however, the trip was only made possible by two other men.

Alice’s husband bought Alice the car in the first place because he thought she would be safer driving than riding a horseback around the other cars suddenly on the road—while he himself never learned to drive. After Alice became proficient in driving around her home, she took a ride two hundred miles round trip to Montauk, New York. While there, Alice came across a representative of the automobile manufacturer who had crafted Alice’s vehicle. The man was so impressed with Alice’s ability to drive he offered her an all-expense paid trip across the United States, all she had to do was drive. The goal? Prove Maxwell-Briscoe vehicles were so easy to handle even a woman could traverse the United States behind the wheel of one.

Along for the ride were Alice’s two sisters-in-law, both of whom were in their forties, as well as a sixteen-year-old friend. The women wore helmets and goggles throughout the trip and Alice ensured the other three women all learned the basics of automobile safety before they hit the road.

Because there were few maps available at the time, Alice would often follow telegraph lines in the hopes of finding towns. The book that had been published that supposedly gave directions throughout the eastern half of the United States often gave directions like, “Turn left at the yellow barn,” not taking into account the owner might one day repaint the barn green! Things got so bad at times; Maxwell-Briscoe would have to hire pilot cars with drivers familiar with the area to help Alice navigate her way to the next town.

The women ate at restaurants but were very happy to accept home cooked meals when someone offered. They stayed in hotels, survived off canned food from general stores when nothing else was available, and kept on driving. Their top speed on the trip? A fantastic forty-two miles per hour.

Along the way, the car suffered from at least one tire blowout (the Automotive Hall of Fame claims there were actually eleven!), a broken engine coil, radiator issues, and they even ran out of gas at one point. Iowa proved particularly troublesome, and it took the women thirteen days to traverse the state’s three-hundred-and-sixty-mile trek of the road. The weather and uneven roads led to the car having to be towed at certain times, but eventually the women made it across. The Maxwell-Briscoe car company would later state the women experienced no trouble along the route, but this obviously wasn’t true.

After completing the historic trip, Alice returned home to her husband and raised two children. Her brush with fame was over, but she did continue to drive. Alice reportedly lost count of how many times she completed the cross-country trip after her thirtieth successful drive.

In 1960, the Automobile Manufacturers Association named Alice the “First Lady of Automotive Travel” for her historic trip. Alice published an account of her drive and went on to complete five of the six routes through the Swiss Alps. She would have covered the sixth too if not for her pacemaker. Alice kept her driver’s license valid until she was ninety-five.

In 2000, Alice was posthumously inducted into the Automotive Hall of Fame; the first woman to claim that honor.