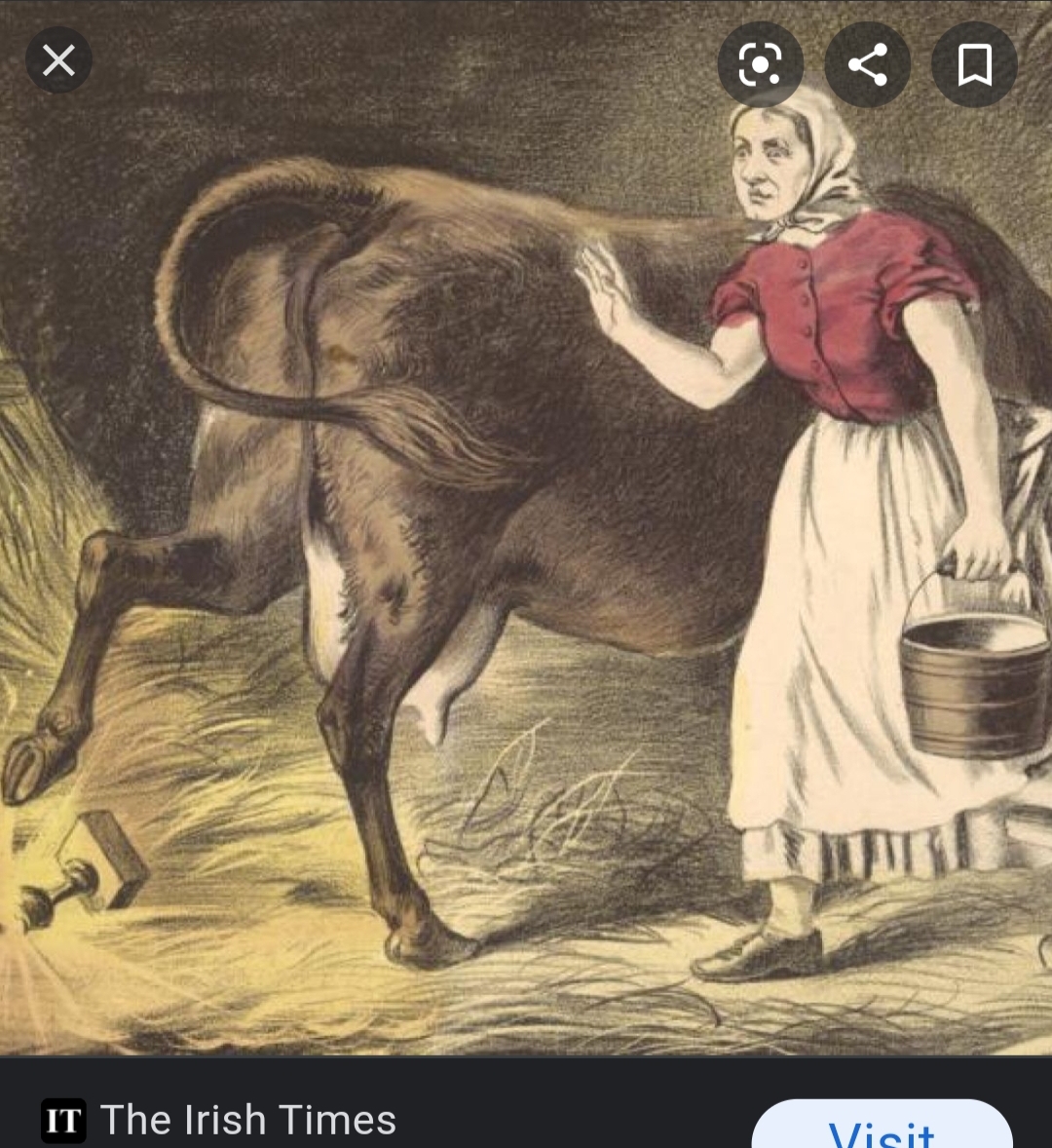 Yes, you’re reading that right. For over one hundred years now, Chicagoans have been blaming a poor hapless woman and her cow for burning down large swaths of the city and killing dozens of people. The only problem? None of its true.

There are no known images of Catherine O’Leary, at least none that survive today. As Smithsonian puts it, can you even blame her for turning away from the cameras?

Journalists made Catherine and her family’s lives hell after the fire. They called Catherine an assortment of colorful things and routinely showed up on the family’s doorstep. Catherine’s husband would send the dogs after the journalists and even throw bricks at them, but nothing deterred them! One story even says PT Barnum showed up and asked Catherine to join his circus (the story goes on to say Catherine chased him off with a broomstick!).

Catherine died twenty-four years after the fire. While the official cause was pneumonia, her neighbors reportedly claimed it was actually a broken heart. So how did Catherine, and her cow, become the sole party responsible for the deadliest days in Chicago history? And more importantly, why?

On the 8th of October, 1871, sparks began to shoot out of the O’Leary family barn. At the time, Catherine was sound asleep in the adjoining house. Unfortunately, the sparks soon turned to flames, and those flames were picked up and furthered by roaring winds. At some points, the fire was over one hundred feet high. The fire was finally put out on the morning of October 10th, when rain smothered the last of the surviving embers. In less than two days, three hundred people died, one hundred thousand were left homeless, and an estimated two hundred million dollars’ worth of property was damaged. No one argued where the fire had started; it was proven to have been sparked in the O’Leary Barn (though miraculously the family’s house was untouched). But how did it start, why, and how were Catherine and her cow blamed for the damage?

Catherine and her husband were both immigrants from Ireland. Her husband was a laborer while Catherine made a living by selling milk from her five cows’ door to door throughout the west side of Chicago. Catherine was illiterate and had several children (though I haven’t been able to find a number for exactly how many). Though the family was poor, Catherine and her husband made the decision to pay to have their children educated in the local Catholic church school, as surviving church records indicate. The O'Learys were poor, but they were surviving and thriving much better than they might have in their native Ireland.

Before the fire was even put out, children in the neighborhood began telling reporters the fire started when Catherine was milking her cows after dark (at least says Smithsonian, Irish Times says a reporter made the story up and later admitted he lied about the whole thing). As the story went, one of the cows was spooked by something, kicked over a kerosene lamp, and the fire started from there. The story spiraled from there, until the story took on another twist in the tale, alluding to Catherine’s ethnic heritage and status as an immigrant. The Chicago Times went so far as to say Catherine deliberately set the fire because of how native Chicagoans had treated her because she was from Ireland. The one thing all of these stories seem to forget is, it was miraculous that the O'Leary home was unharmed in the fire. Why would a poor woman deliberately light her barn, and possibly house, on fire and destroy everything she had? Because she didn't! Anyway...

After the fire was doused, the Chicago city government held an inquiry into what happened. Catherine testified at the hearing, and said she was in bed when her husband roused her by telling her the barn was on fire. Catherine went on to say a neighbor had held a party that night, and that other witnesses had seen a man going into her barn after nightfall. Another neighbor who lived across the street testified he saw the barn on fire and tried to free the cows, also telling Mr. O’Leary about the barn being on fire. The inquiry lasted nine days. They interviewed fifty people and went over one thousand pages of testimony; and in the end they decided the cause was…inconclusive. Catherine was found not responsible, but the public didn’t care. Even today people still smear her good name and state she was the sole reason for all that destruction and loss of life.

Catherine’s story doesn’t end after the inquiry though; not by a long shot. One of Catherine’s kids, Jim, was two years old at the time of the fire. Once he grew up, Jim became “Big Jim O’Leary”, a local gambling kingpin and saloon proprietor. Jim always insisted the fire was started by spontaneous combustion of wet hay (though this is unlikely given how hot and dry the air was at the time), and he was known to not take kindly to anyone insulting his mother in front of him.

In 1997, the city of Chicago finally did the right thing. The City Council exonerated Catherine and her cow of any and all blame for starting the fire. If only the public at large would get with the program.