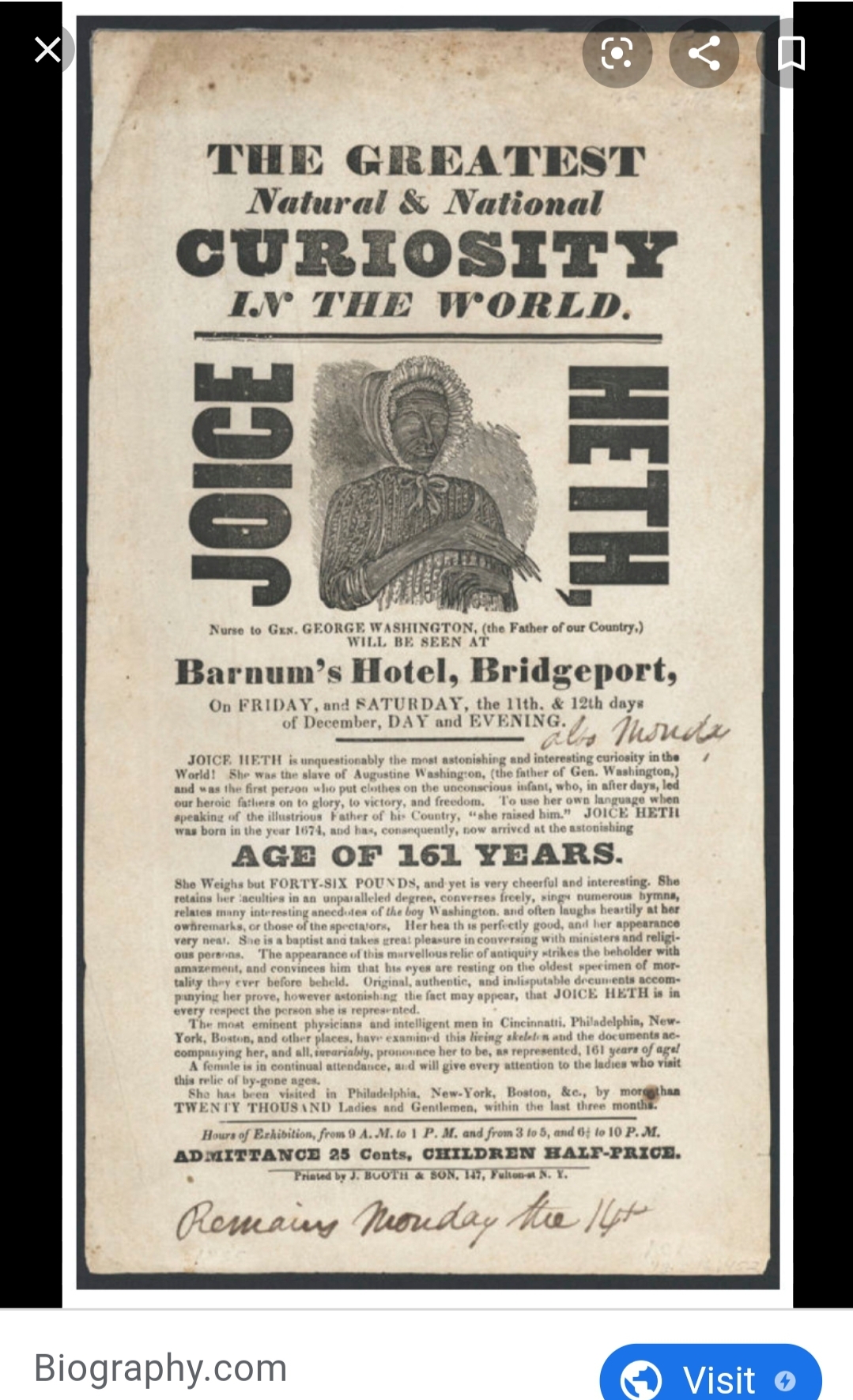 Joice was already elderly when she first came across the man now associated with the moniker “The Greatest Showman.” Some believe Joice was born in Madagascar, before she was enslaved and brought to the United States. The only source for this claim comes from a single newspaper article published during her lifetime however, and so historians today can not validate with certainty that Joice was born on the African island.

PT lied, claiming on promotional marketing Joice was George Washington’s Nursing ‘Mammy’ and that she was 161 years old. In reality, Joice was born approximately twenty-five years after America’s first Constitutional President. Its also important to note, however, that PT didn’t come up with this story on his own. He bought Joice and the rights to her story that an earlier owner had devised. Most historians agree PT was actually the third of Joice’s owners to try and pass her off as being George Washington’s nanny.

Joice was so old by the time she took the stage she was blind and could only partially move one arm but for seven months she told people stories about “Little George.” Most consider it merciful Joice passed away less than a year after becoming a part of PT Barnum’s show. During the seven months she toured with the showman, it was estimated Joice was earning him around $1,500 a week.

To authenticate her age PT had her publicly autopsied in front of 1,500 people (in case you didn’t know that The Greatest Showman is almost 100% inaccurate, well, now you know!). PT charged each of the viewers $.50 to view the autopsy, so he profited off of her death just as much as he had when Joice was alive.

When the doctor said the woman he was autopsying was much, much younger than PT had claimed (he estimated her death between seventy-five and eighty years old), Barnum immediately had a reason to explain it away. According to PT, the corpse was of a completely different woman and that Joice herself was actually touring Europe. So yeah, that’s a thing that happened.

It wasn’t all terrible though. Before Joice died, early abolitionists in the United States decried her treatment and used the controversy around her story to further their own goals, to see slavery abolished in America. Some pastors and ministers also ordered their parishioners not to attend Joice’s shows on moral grounds; with some claiming it was a “grotesque spectacle.”

PT finally admitted it was all a hoax and that Joice had not actually lived to be over one hundred and fifty years old later on, after his own career had taken off.