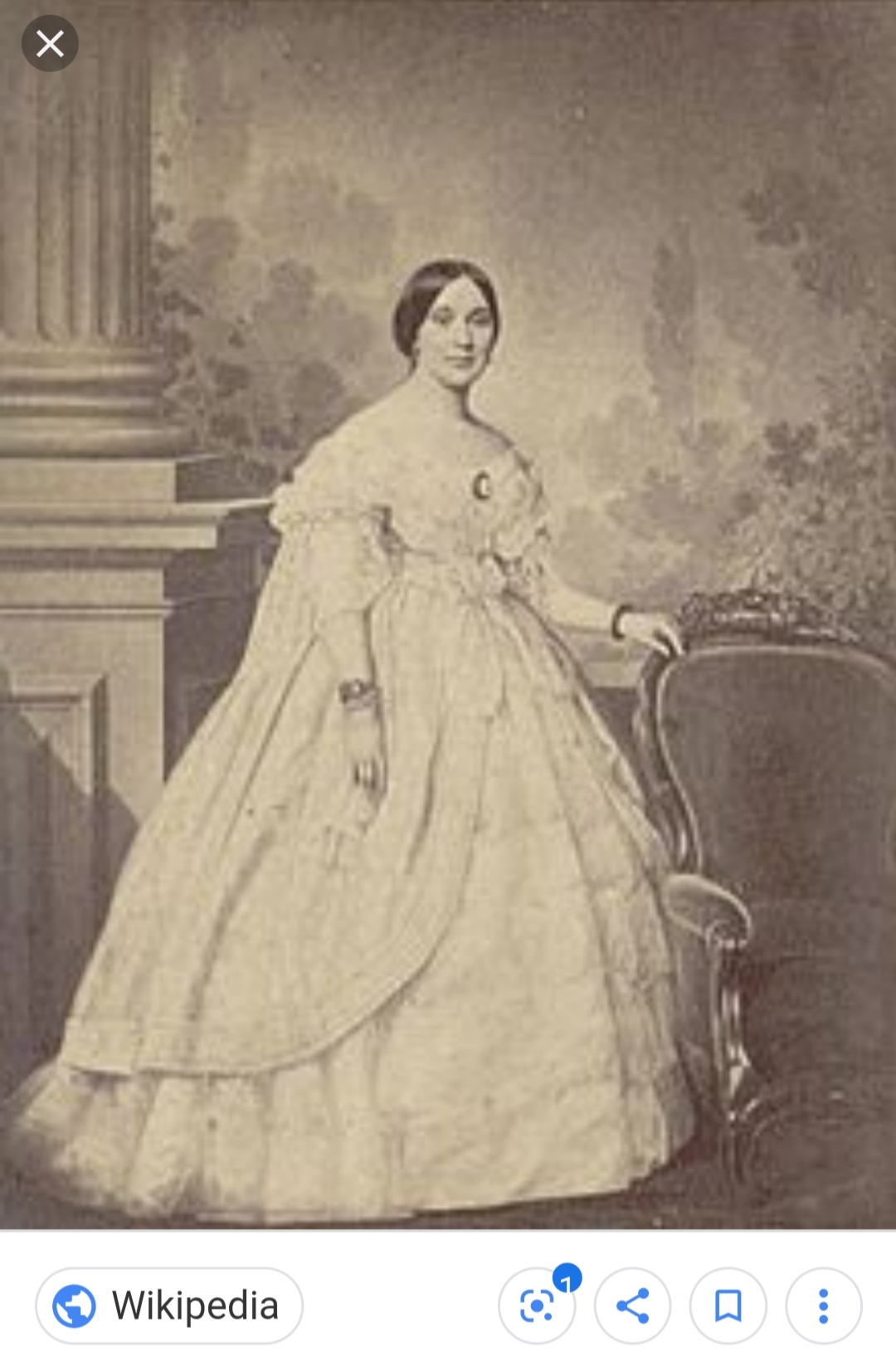 Her father was a hero from the War of 1812, and she was raised as a tomboy in the bayous of Mississippi.

When Varina was seventeen she met her future husband, Jefferson Davis, and pretty much immediately fell in love (him not so much—he’d spent the last eight years in mourning over the untimely death of his first wife).

However, things soon turned around and they quickly fell in love with each other. Varina accepted his marriage proposal at the age of eighteen.

In her younger years she had been an ardent Whig but put aside her own political beliefs in the hopes of understanding her husband’s place in Democrat Politics.

On the honeymoon Jefferson took Varina to the place where his first wife was buried, and they placed flowers on her grave.

They settled on a plantation and according to the source Varina was admired by her slaves for her help attending births and with the sick, mourning the death of one of them and celebrating marriages.

She waited behind when Jefferson went off to war with Mexico though she did not like it.

Varina was present when Jefferson resigned from the United States Senate in 1861. The family of five (they had seven children eventually, but one died in childhood) would soon go to Montgomery to accept Jefferson’s nomination for the office of President of the Confederate States of America. She was thirty-five at the time.

As the war progressed Varina was given more and more access into the political workings of the country (which critics would attack her husband for).

During the president’s frequent bouts of sickness Varina was responsible for acting as liaison between him and Cabinet.

After Varina gave birth to their fifth child the press began to call her portly and middle aged.

Her other roles as First Lady included visiting the wounded, delivering supplies, writing letters to the wounded, and aiding women of authority within the hospitals.

She was also known for her sarcasm (though it was seen as a negative).

Varina and Jefferson lost a second son while in office (Isaac and Samuel had died previously); Joseph climbed up and over a railing and fell to the bricks below. Varina gave birth to another daughter soon after at the age of thirty-seven.

Varina accepted before her husband the Confederacy’s defeat and started to prepare for the aftermath. After her husband’s capture she sent all but their youngest north to Canada to be safe and petitioned for four months to be allowed to communicate with her husband again.

After much insistence from Varina Jefferson was released in 1866 having never faced trial.

They spent several years apart with Varina spending much time in Europe and Memphis, Tennessee.

After his death Varina moved to New York and became pen pals with Julia Grant, the former First Lady of the United States.

She died from pneumonia but told her daughter Margaret on her deathbed not to wear black because it would depress her daughter’s husband and was bad for her health. Varina outlived all her children, save Margaret, who would pass herself three years later.

Using Find a Grave as a source we can gather the following about her children:

Samuel, died one month before his second birthday (1854)

Margaret, only child to outlive her mother (she and her sister would outlive her father) died aged 54, (1909)

Joseph, died aged 5 after falling from the railings of the Confederate White House (1864)