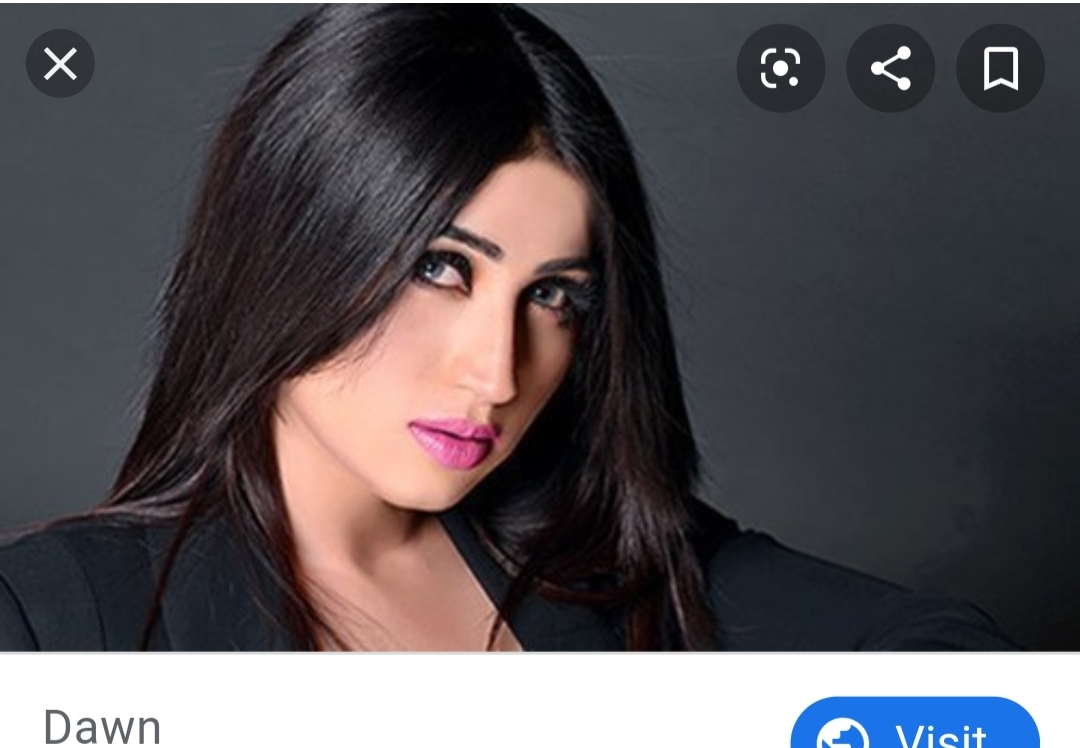 "At least international media can see how I am trying to change the typical orthodox mindset of people who don’t want to come out of their shells of false beliefs and old practices."

Qandeel was murdered via a so-called “Honor Killing” by her brother.

She was called the Kim Kardashian of Pakistan for her social media presence. Some have even gone so far as to claim Qandeel was Pakistan’s first social media star in general.

At the age of eighteen, Qandeel had been married off to a cousin and had a son with him. She accused her husband of abuse, but he denies the accusations. After two years, the marriage ended. Initially, Qandeel tried to raise her son as a single mother. However, after she realized she couldn’t take care of him in her current circumstances, Qandeel returned the boy to his father. She always hoped to get him back one day, but Qandeel never saw her son after he was returned to his father.

After leaving her husband, Qandeel was disowned by her family. One of her brothers even reportedly threatened to kill her to reclaim the family’s honor, but she escaped the violence at that time. The next three years of her life are shrouded in mystery. No one really knows where she was or what she was doing, but by 2012 that would change. Moving to Karachi, Qandeel officially changed her name and began her career on television. She had a few bit parts, but nothing major. Finally, in 2014, Qandeel discovered social media.

Qandeel’s social media presence always marked her as refusing to follow the more mainstream Conservative role Pakistani women have long played in society. One of her first posts to garner attention was Qandeel swimming in a pool with other men around. For those of us in the western world, the response might have been, “Um, so what?” But in Pakistan, this was boundary breaking.

Qandeel went on to appear in music videos and became a huge star on various social media sites, most notably Facebook. She was even paid to promote several products on a few occasions. According to people she worked with, Qandeel wrote scripts and reshot her videos over and over again until she thought they were perfect and would go viral. Qandeel even made national headlines when she promised to do a striptease for the captain of the Pakistani cricket team should Pakistan beat their rival India in the World Twenty20 Cup.

At another time, Qandeel went viral again. This time it was after a Pakistani politician and former cricket player announced he was divorcing his second wife. Qandeel, never one to let a good headline go, showed up in front of his house with news cameras in tow. Qandeel was determined to become Mrs. Khan number three, and even asked cameramen to help her over the wall into the man’s yard to beg him to marry her. Obviously in her eyes, this was all in good fun, and it made Qandeel an even more household name across her country.

Qandeel hid her real name and birthplace as best she could, but the truth about her past came out after a major controversy surrounding a leading Muslim scholar in her country. The scholar was fired from his job after photos surfaced of Qandeel and him in a hotel room, alone, during Ramadan. In one of the photos, Qandeel can be seen wearing his lambskin hat, while in others they are posed in ways Muslim religious scholars are not supposed to pose; if you catch my meaning. Both Qandeel and the scholar would later accuse each other of various things. Qandeel stated the man was in love with her, while he would say Qandeel was trying to steal publicity off of him. Qandeel also said the mullah shared a cigarette and a drink with her; a major no-no seeing as this happened during a religious holiday and she was a woman.

Before her identity was leaked, Qandeel had told her followers she was the daughter of a rich landlord. In actuality, she had grown up in a house with dirt floors in a small rural village. She had six brothers and at least one sister. Her family was horrified and angered when her identity was leaked, and the world learned she had come from them. Qandeel’s father was staunchly conservative and the women in her village are rarely seen outside of the home. When they are, they are completely covered from head to toe in a niqab. One of Qandeel’s sisters remembered, as a child, Qandeel was already claiming she would never cover up with a niqab.

Qandeel was found dead only eighteen days after her real name hit the press. Before her death, Qandeel asked for police protection and never received a response. Her brother killed her in their family home while their parents slept; possibly after being dosed with sleeping pills by Qandeel’s brother. The Human Rights Commission of Pakistan said they estimated in 2015, 1,100 women in Pakistan were victims of so-called “honor crimes.” The estimates continue to state that around 1,000 women are murdered in honor killings ever year in Pakistan, but that might be underreported considering most are chalked up to "suicide."

After three years, Qandeel’s brother was found guilty of murder and sentenced to twenty-five years to life in prison in 2019. Several other defendants were acquitted; including the man Qandeel had been in the hotel room with when the scandal erupted. He was being investigated after it was reported that his influence and following might have indirectly led Qandeel’s brother to kill her. He certainly had motive of his own, seeing as the scandal ruined his career.

After her murder was announced, that man’s official response was, “In the future, before you humiliate the clergy, you should remind yourself of this woman's fate.” So, you know, an overall stellar guy there. He also stated that even though he’s a liberal who supports the ending of honor killings, in Qandeel’s case her death was a sign of God’s displeasure towards her. He also said it was telling that she had over 700,000 followers online but less than 100 showed up to her funeral service. Just go on and keep proving why Qandeel didn’t like you.

Qandeel’s parents were very upset when the verdict was handed down against their son. They stated they had forgiven him and did not want him to go to prison. As sick as that sounds, its worse when you realize Qandeel had paid for them to move to a bigger town and bought them a new house with the money she earned from her career (they were subsequently sent back to their original home after Qandeel’s death). At the time in Pakistan, the family of a murdered girl could ensure the murderer, who is also a member of their own family, could not be found guilty so long as the family forgives them. However, in Qandeel’s case, the local police decided the family’s forgiveness could not save Qandeel’s brother that time. Luckily today the law has changed, so that even if a family member is forgiven, they will still have to serve time in prison if they are found guilty.

In my own personal opinion, the reaction of Qandeel’s family is exactly why so many women and girls are still victimized in Pakistan and other Middle Eastern and Muslim majority countries. It is the same attitude that allows dowry crime to fester in rural parts of India (it is estimated twenty women every day die from dowry murder or forcible suicide every year in India). We have to protect our women and girls, not let their own families kill them for so-called honor or to collect another dowry. Why is this such a controversial opinion?!

I’ve taken the liberty of sharing the following statistics from the second BBC article linked below. This information was written in 2019. As you can see, Pakistan is one of the many nations that has a long way to go in terms of gender equality. Qandeel helped push her people closer in that direction, but her murder shows just how far things need to go still.

“According to the World Economic Forum, Pakistan is the second worst country in the world in terms of gender parity. Women hold fewer than 7% of managerial positions.

More than five million primary school age children in Pakistan are not in school, most of them are girls, according to Human Rights Watch.