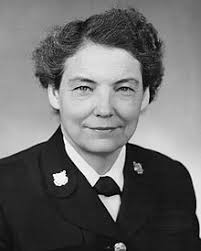 First, I feel it necessary to say do not, and I mean DO NOT, confuse this Dorothy with the Playboy actress who was murdered by her significant other also named Dorothy Stratten. Two completely different women with two very different life stories!

Our Dorothy was paving the way for women long before joining the Coast Guard. She earned her bachelor’s degree in 1920, the same year women secured the right to vote in the United States. She would later go on to earn a doctoral degree as well.

In 1933, Dorothy, who was an assistant professor of psychology, became the dean of women at Purdue University. Dorothy was the university’s first full-time dean of women and at the time only 500 women were students there; most of them studying home economics.

Over the nine years Dorothy spent as dean at Purdue, the enrollment of women expanded to 1,400 students. The university also built three dormitories for their female students and saw the implementation of a liberal arts program for women.

Dorothy left Purdue to enter service in the US Armed Forces during World War II. In 1942, Dorothy helped create and became the first director of the Coast Guard’s Women’s Reserve (also known as the SPARs Program, a name Dorothy coined from the Coast Guard’s slogan Semper Paratus or Always Ready). Earlier that year, Dorothy had been selected for the position and pulled from her place as a Senior Lieutenant in the Navy. In her new position, Dorothy officially became the first commissioned officer in the US Coast Guard. She would later be awarded the Legion of Merit for her services.

The purpose of the SPARs, much like the WAVES (Navy), WACs (Army), WASPs (what would later become the Air Force), and the women in the Marines (they didn't have a cool acronym, but were just as important!) was to free up positions on the home front to allow men to serve overseas. In all, 10,000 enlisted women served in the Coast Guard alongside another 1,000 commissioned officers during the war.

After leaving the armed forces in 1946, Dorothy went on to become the first director of personnel at the International Monetary Fund. She also later became the executive director of the United States Girl Scouts, serving for ten years between 1950 and 1960.

Sadly, after Dorothy retired from the Girl Scouts, very little other information about her ever surfaced. She seemed content to her anonymity, and something must be said about that. Dorothy was never in it for the glory, instead, she was in it to serve her country the only way she knew how. Dorothy lived on to be 107 years old, before passing away in the same city Purdue University operates. She was never far from home.

In 2010, Former First Lady Michelle Obama oversaw the christening of a Coast Guard cutter named the CGC Stratton, in honor of Dorothy and all the women who served in the US Coast Guard during World War II.