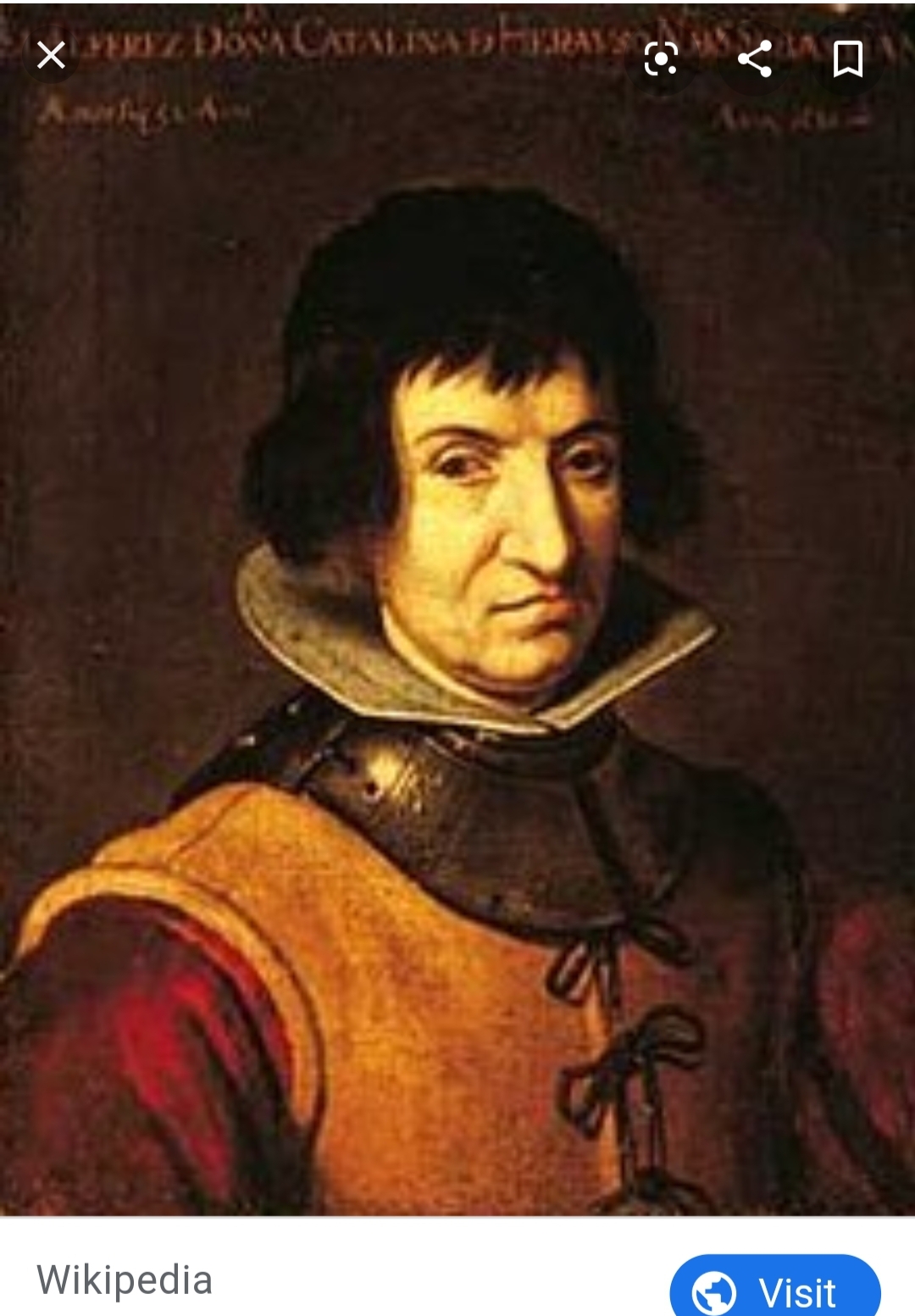 Before she was born, Catalina’s father was wounded in battle. He made a vow, that if he were to survive his wounds, all his sons would join the army and all his daughters would become nuns. Therefore, Catalina was trapped in a convent from the age of four to fifteen with abusive nuns who would beat her regularly. Obviously, this marked the young girl, and she decided freedom was more important than staying in one place.

Catalina eventually ran away and started crossdressing (taking the masculine name Francisco de Loyola). From that point onward Catalina lived her life as a hard drinking, womanizing, killer of men. Her first victim came when Catalina was eighteen (or eleven if you believe the later birth year of 1592*, but eighteen is more probable). Catalina went to a theatre and was insulted by some random dude. After she beat him up, rando came back for revenge a few months later. Catalina not only killed him, but several of his friends as well, before running to take sanctuary in a church.

Later on, Catalina joined the army and was put under her brother’s command (he didn’t recognize her; being separated from her family at a young age and the fact that they were now on a new continent—South America, makes this believable). Catalina started having an affair with her brother’s mistress (for three years!). Her brother found out, they fought, and she fled to a church for sanctuary; then she stabbed an Army buddy in the chest over a small understanding (over gambling) and when a judge interceded she sliced him in the face and ran to a church for sanctuary all over again!

After staying in a church for six months after slicing the judge, Catalina went out to place herself as a second in a duel and unknowingly killed her brother (then fell into a depression for a year).

Catalina had many many adventures over the years in South America, traversing the continent and fighting in numerous battles and for various armies. She also earned the reputation as an “Indian fighter” and has a less than favorable opinion of the indigenous populations. Catalina’s story is very confusing and the exact sequence of when she killed who and where changes from source to source, but what we do know is that she killed many people and got in fights with many others over the years.

Catalina also had at least four run-ins with separate women** who never realized she herself was a woman. One of these escapades actually involved Catalina being engaged to two women at the same time; she skipped town before marrying either of them.

Later in life she killed another guy and was sentenced to death. At her last communion, Catalina asked to have it in the church and once there she declared sanctuary. A month later she skipped town, killed some more cops and took sanctuary again. This time the Bishop found out she was a woman (and a virgin at that!) which somehow cleared her of two decades of murder and other crimes and made her a Blessed Individual.

Catalina made her way all the way to the Pope who told her she was free to continue wearing men’s clothes provided she stop killing people. It was one of the ten commandments after all, and a pretty important one at that. By that point she had been back in Spain for anywhere from several weeks to several years (again, depending on the source). While still in Spain, Catalina was granted a lifelong military pension from King Philip IV.

Catalina lived out the rest of her life in relative quiet (only cutting one more guy in the face over a game of cards). Some sources state she lived until around 1650, while others state she vanishes from the pages of history in 1635 after embarking from her trans-Atlantic voyage to Mexico.

She also wrote an autobiography of her life; something rare in the history of women overall. Catalina wrote it in 1626, but the book wasn’t published until the 1800’s. For this reason, if you find and read the book, you should probably take it with a grain of salt.

*Explaining Catalina’s two birth years—The first date, 1585, stems from the autobiography Catalina herself supposedly wrote. However, a baptismal certificate has been located indicating Catalina was born on 10 February 1592. Today, no one is certain which date is correct.

**Today, historians and scholars have struggled over how to classify or write about Catalina’s sexuality or gender identity. In the autobiography Catalina supposedly wrote, she switches back and forth between masculine and feminine pronouns. Because she never recounts having an attraction to another man, most claim she was lesbian. However, others classify her as transgender (female to male). I have chosen to use all feminine pronouns in this article for two reasons. One, Catalina was born female, and two, she identified as female later in life and in her autobiography, later in life. The idea of transgender as we know it today did not exist in the early 17th Century either, which is another contributing factor in why I have written the article the way I have.