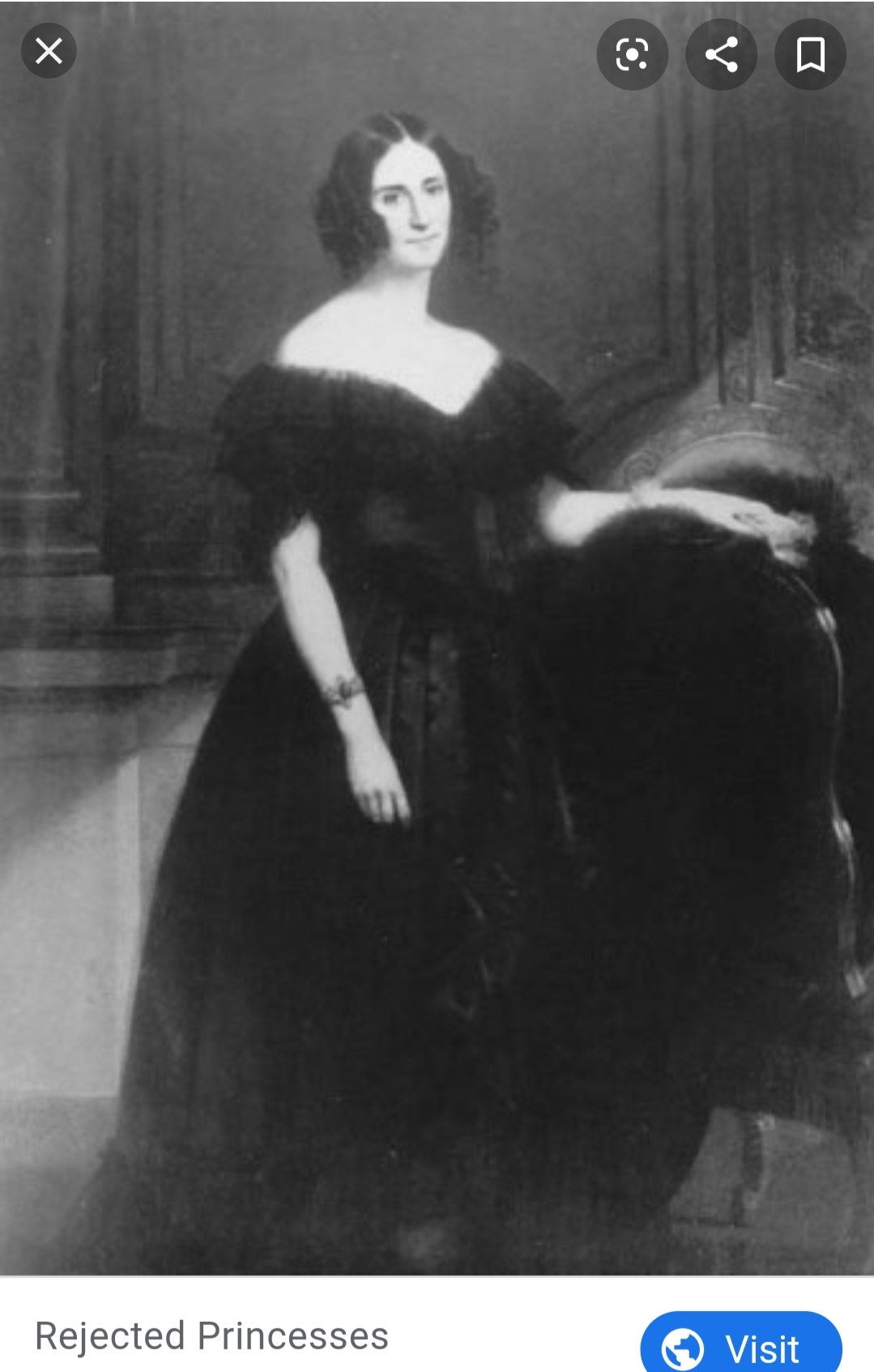 “I can now say that I have gone through my purgatory while still on this earth.”

Micaela was also the Baroness of Pontalba through her marriage.

Micaela’s marriage to her cousin gave her the worst father-in-law ever. That’s not an exaggeration or an opinion; I literally dare you to find a man who treated his daughter-in-law worse than the way Micaela was treated by her father-in-law.

Micaela was born into a wealthy Creole aristocratic family in then Spanish-Controlled Louisiana. She was the couple’s only child (I mean, her dad was seventy when she was born!), and so one day she would inherit their vast fortune. This made Micaela a prize catch to many men around the world. To put into perspective how wealthy the Almonester family was, take this example. Micaela’s father donated and paid for the St. Louis Cathedral, the municipal hall, and the priest’s house—all in the French Quarter. Micaela would later marry in that same cathedral.

Unfortunately for her, Micaela’s mother decided to marry her daughter off to her cousin, Celestin de Pontalba; and Micaela therefore also inherited his awful father, Joseph, the Baron Pontalba. Joseph was so unhinged he demanded his wife and son write daily accounts of every single thing that happened to them whenever they were separated. According to one source, in a letter Joseph wrote to his son Celestin (who was a child at the time) Joseph lovingly included the following passage, “Are you not sorry not to have your dear papa put his arms around your neck and squeeze you tighter and tighter?” Yikes!

After the wedding, (which took place when Micaela was only fifteen) Micaela was taken away from her home in New Orleans and shipped off to mainland France. Upon arrival there, the issues began. Once Micaela was unpacked and settled in at home, her father-in-law Joseph decided to take a look at the marriage contract and Final Will Micaela’s mother had written for her daughter. This is when Joseph realized Micaela’s mother was looking out for her daughter after all. Micaela would retain sole control of her family’s fortune. Her new father-in-law, who had married his son to Micaela solely to gain control of the Almonester estate, was furious.

Over the next few years, Joseph destroyed Micaela’s life as mercilessly as he could. Joseph ensured Micaela had no contact with any friends or family and cut her off from everything else she knew. After years of this abuse, Micaela broke, and signed Power of Attorney papers to allow Joseph control of her money and assets.

By that point, Micaela was a mother to several young children (she had five but two died in childhood), and was probably trying to protect herself and her children despite knowing the decision was a disastrously wrong one. Micaela was also, most likely, trying to salvage her rocky marriage. Despite the fact her father-in-law was a horrible excuse for a human being, Micaela might have actually loved, or at least liked, her husband Celestin. Unfortunately for Micaela, soon after she signed the Power of Attorney papers, Celestin abandoned Micaela and their children.

But they were still married. This meant Micaela was still under her husband and father-in-law’s purview. Recognizing this, Micaela moved to Paris and rented one of her husband’s numerous homes. She lived on a meager $600 a month allowance and tried to eke out a semblance of a life.

Quickly realizing Celestin was never coming back, Micaela decided to act. She left France, returning to her native New Orleans and the people she knew and loved. Micaela flipped the tables on the Pontalba’s; soon her monthly income was near $40,000 after she reclaimed her assets. Once she was financially comfortable, Micaela did the next best thing—she sued Celestin for divorce in a Louisiana Court.

If you thought things were bad for Micaela before, well, you best buckle up and remember, it can always get worse.

Unable to let Micaela go without a fight, Joseph and Celestin decided to hire spies to follow Micaela’s every move. They hoped to collect evidence to prove Micaela was having an affair. When that didn’t work, Joseph and Celestin managed to garnish Micaela’s income, and get the French courts to order her back to France.

After Micaela arrived there, Joseph and Celestin decided the best course of action would be to drive her insane. Micaela was locked in a single room with no visitors; not even maids to help her dress for the day. Any guest to the home was ordered not to pay Micaela any mind, and everyone living in the house were punished if they acknowledged her presence. Joseph and Celestin were determined to turn Micaela into a living ghost, a haunted soul that no one could see or hear.

But Micaela refused to accept this lying down. As the punishments increased, Micaela began to collect evidence of her own. She was determined to beat Joseph and Celestin at their own game. As the legal case drug on for years, Micaela was bested again and again thanks to the strict (read: sexist) French legal system. She was also forced to pay all of the Pontalba’s legal fees.

After four years of Micaela and her in-laws battling things out, Joseph finally broke. Micaela had refused to show any fear or break herself, until Joseph couldn’t take it anymore. Micaela’s father-in-law busted into her room, two dueling pistols in hand. He quickly fired the guns, shooting Micaela in the chest four times. Four! Micaela’s left hand was damaged in the attack, but she survived.

Joseph on the other hand, did not. After shooting Micaela, he went back to his study, put his affairs in order, and then shot himself. That time he was successful in ending a life.

Micaela’s recovery was a slow and painful process. The pain was so intense she couldn’t sleep, while epileptic seizures rocked her body for three weeks after the attack. One of her fingers had to be amputated, while one of her lungs was so damaged Micaela wouldn’t even be able to climb a flight of stairs without being out of breath for the rest of her life. Micaela’s mother-in-law never acknowledged her daughter’s suffering, but Celestin stayed by her bedside to care for her.

Micaela was not impressed by her husband’s sudden compassion. It was too little too late, and when asked about it later, Micaela merely said Celestin acted towards her as he should have, being her husband and all.

After three weeks in living hell, Micaela returned to Paris. She sued for divorce once again and was once again denied by the French courts. Micaela also lost several of her high society friends because of the nature of her “scandalous” life. Celestin was so happy about her failings in court, he took copies of the proceedings and printed them out, handing the copies to anyone on the street practically.

Celestin’s ego finally caught up with him. By openly mocking his wife, Celestin clearly failed to provide his husbandly duties. That’s right, Micaela finally received a legal divorce after proving Celestin had failed to protect her. The courts didn’t think he had failed after he allowed his father to torture Micaela for years or shoot her in the chest four times. Oh no, he finally failed to be a good husband by insulting her in the streets. But hey, at least she was finally free. Later, a Louisiana court would also order the Pontalbas to return all of Micaela’s assets to her.

Now forty years old, Micaela pivoted her life to one of building. Micaela decided she wanted to be an architectural designer. Her first project was the Hotel de Pontalba, a landmark in Paris today and the official residence of the United States Embassy. After returning to New Orleans, Micaela next constructed a series of structures known as the Pontalba Buildings. Today, the Pontalba buildings are known as some of the most iconic structures in the French Quarter. They were declared National Historic Landmarks in 1974.

Within a few years, Micaela was a shark in the real estate game; shrewd but tough. She knew what she wanted, and she knew how to get it. Micaela was also so good with money she quickly became head of the family fortune, as she should have been all along. Her children were now grown, and frequently got into financial mishaps. Micaela was always there to dig them out. When they married, Micaela settled their marriage contracts and wills with a tenacity that could only have come from an actual survivor like Micaela clearly was.

When Celestin grew old and infirm, Micaela hired servants to care for him; ensure he was eating and looked after. Though we don’t know how she really felt for him, in the end or even the beginning, its clear she didn’t outright hate him. She even moved back to France to be with him; spending the last twenty-three years of her life there.

When she passed away, Micaela was in her late seventies, and one of the most respected, and feared, members of the New Orleans high society. She is buried in a tomb beside her husband…and her father-in-law.

In 2003, with the passing of the Louisiana Purchase’s Bicentennial celebration, an opera portraying Micaela’s story, entitled “Pontalba.”

Micaela’s story is mentioned on an episode of the Travel Channel TV Show The Dead Files. Unfortunately, if the psychic medium Amy Allen’s findings are to be believed, Micaela is today trapped with the spirit of her horrific father-in-law Joseph, and she may never be free of him.