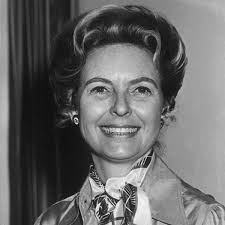 “I want to thank my husband, Fred, for letting me come here...I like to say that, because I know it irritates women’s libbers more than anything else.”

“I simply didn’t believe we needed a constitutional amendment to protect women’s rights. I knew of only one law that was discriminatory toward women, a law in North Dakota stipulating that a wife had to have her husband’s permission to make wine.”

The ERA? Who Needs That?

Phyllis is most known for her fight against the Equal Rights Amendment, but she also fought against Communism and legalized abortions.

Phyllis was known as the “First lady of the Conservative Movement” in the latter half of the twentieth century here in the United States. Her work was widespread but also drew many detractors.

Phyllis was one of two children, and her parents were hardworking and industrious. Her father was a staunch Republican, an inventor, and opponent of The New Deal, and her mother held multiple jobs over the years to help support the family. Some believe Phyllis’s ambition to ensure women were able to stay in the home if they wished stemmed from her mother. Phyllis’s mom supposedly regretted having to work six days a week; which kept her away from her family and housework.

Phyllis managed to graduate from college after three years, aged just nineteen. She had no time for a social life or friends, and instead worked nights to support her school efforts. After her early graduation, Phyllis went on to earn a master’s degree in only nine months. Surprisingly, in college, Phyllis was much more neutral in politics. She strived to work for the federal government in Washington DC, and even wrote papers supporting the United Nations. When no jobs appeared, Phyllis instead turned to working at a conservative think tank, and quickly became immersed in Republican ideals.

By 1946, Phyllis was working on congressional campaigns and was active in St. Louis politics. In 1949, she married Fred Schlafly, who was fifteen years her senior. Phyllis later said she did not promise to obey in her vows, only to cherish her husband. Once her eldest turned eighteen months, Phyllis was back on track with her hectic career, writing, campaigning, speaking, and traveling across the country. She would eventually have six kids with her husband.

In 1952, Phyllis’s husband declined to run for Congress after being asked. Phyllis ran in his stead, and though she lost in the general election, Phyllis had won in the primary. By 1958, Phyllis and Fred were actively working to educate American Catholics on the danger of Communism, brought on by the torture of Cardinal Midszenty. Four years later, she was hosting a fifteen-minute radio show called “America Wake Up.” You can guess what she wanted American’s to wake up about. Phyllis also actively campaigned for Barry Goldwater’s run for president. By 1971, Phyllis had educated herself and began the battle she is most remembered for today, stopping the ERA from being ratified and added to the United States Constitution.

In 1972, Phyllis founded a volunteer organization called Stop ERA, that eventually morphed into the Eagle Forum three years later. Phyllis’s main reasons for stopping the ERA was that she, and other women, were worried the ERA would counteract or cancel out other laws already in place to protect women; mainly the guarantee of alimony, the forceful obligation of women to provide financially for their family and forcing women to sign up for conscription. By 1973, her support skyrocketed across the country with the passing of Roe V Wade.

Phyllis was also a member of Daughters of the American Revolution and led several Republican women’s groups in Illinois. In her work for DAR, Phyllis served five three-year terms as National Chairman for the National Defense Committee. She also served as National Chairman of American History Month and National Chairman for the Bicentennial Committee. She also served two terms as regent of her chapter (Ninian Edwards in Alton, Illinois) and was an honorary chapter regent. She also worked for DAR on the state level, as State Chairman of National Defense, State Recording Secretary, and editor of the state yearbook.

One of her sons, John, was outed as being gay in 1992 by an LGBT activist. Both John and his mother Phyllis considered the act a breach of privacy, and John never condemned his mother for being against the legalization of gay marriage. One of her last political acts before she died was to endorse Donald Trump for the presidency in 2016.

Phyllis was so villainized by the left that Betty Friedan, a leader in the women's rights movement at the same time Phyllis was active, said Phyllis should have been burned at the stake for her opposition to the ERA. That’s nice. Phyllis and her followers were so powerful they have been credited with helping pave the way for the Reagan Revolution. Without Phyllis and her followers, the conservative right may have never regained power after the liberal revolution of the 1960’s and 70’s.

Phyllis’s story has been in the headlights in 2020 thanks to the FX Show “Mrs. America”, which is “supposedly” based on her life and her fight to eradicate support for the ERA. However, people who have actually studied Phyllis’s story have been quick to point out her portrayal is inaccurate at best and offensively wrong at worst. Basically, Hollywood directors and producers are trying to villainize a Conservative woman, who would have thought?!

Its no surprise Phyllis has been called a traitor to her sex for her work against the Equal Rights Amendment; but the sad thing so few seem to understand is that Phyllis wasn’t alone. She was a leader of the movement, and many women, myself included, do not want the ERA to ever pass, nor do we endorse or approve of the Feminist Movement as a whole.