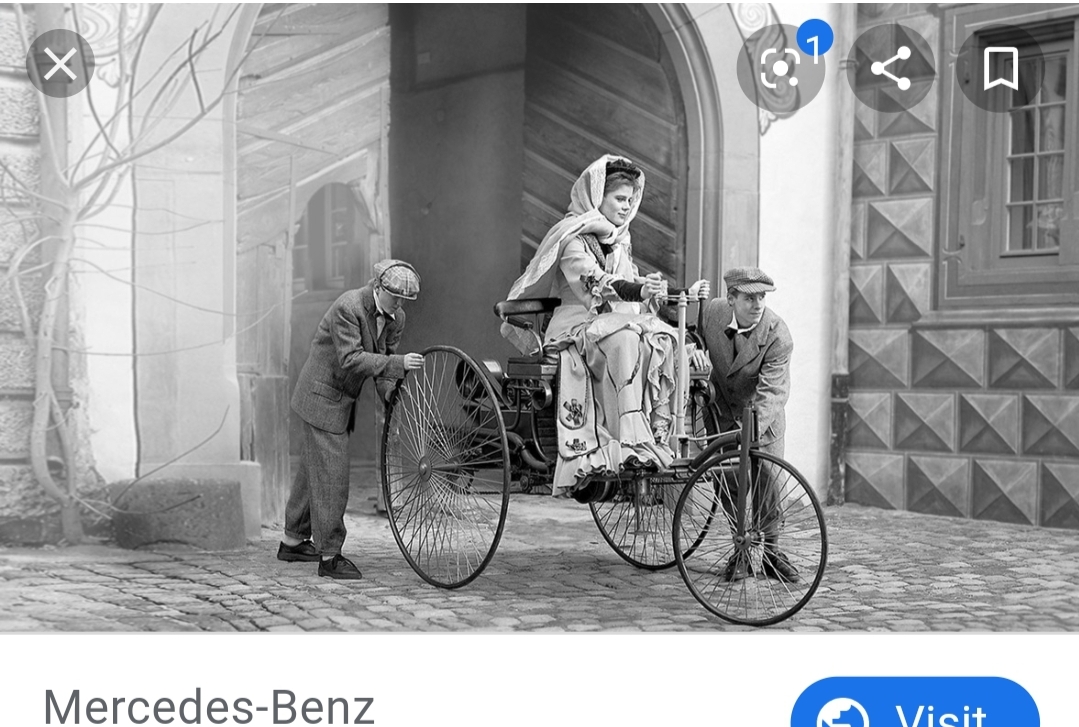 The First Person to Drive an Automobile Long Distance

Bertha was the wife and business partner of Karl Benz (Of Mercedes-Benz fame).

It is said Bertha made her decision to make her mark on the world after finding the Family Bible and seeing her father had wrote “Unfortunately only a girl again” to denote her birth. Bertha loved her father and had cherished the moments they’d spent together, her father teaching her all about locomotive engines, so finding his note was heartbreaking to say the least.

When she was nine, Bertha was finally able to attend school, where her favorite subject was the Natural Sciences. Bertha’s family had plenty of money and she plenty of suitors; unfortunately for her family’s social standings, Bertha’s heart went out to the penniless inventor Karl Benz. Bertha was in love from the moment he began to describe his dream to build a horseless motor-driven carriage.

Even before they’d made it down the aisle, Bertha had invested her entire dowry into Karl’s business and inventions, but he had no business sense and she frequently had to step in and help. The early years were hard with numerous setbacks and instances where social ridicule came onto the Benzes, but Bertha never wavered in her support for her husband or left his side. They had five children together.

On 29 January 1886, Karl officially received a patent for his motor carriage, and became the official inventor of the motor vehicle. Unfortunately, no one was interested in buying. The invention was about to become a massive flop unless a marketing genius figured out how to sell it. And so, Bertha took the car for a joyride across the German countryside.

In 1888, Bertha took a trip that was sixty-six miles each way in the Benz Patent Motor Car #3 to prove they were safe and reliable; making her the first long-distance car driver in history. The drive took her twelve hours one way  (the vehicle’s maximum speed was 25 miles per hour after all); a journey Bertha undertook with two of her sons. The first pharmacy where she stopped to pick up the liquid needed to propel the car is considered the first gas station in history.

Bertha took the car without her husband’s knowledge and faced many issues with the car along the way, but she made it. Through the use of hat pins, pieces of her clothes, and emptying out pharmacy shelves, Bertha and her boys made it…almost. In actuality, they ran out of fuel completely a few miles short of their destination and had to push the car the rest of the way—but they made it! On the return trip, Bertha and her sons took a different route to introduce even more people to the car. Their trip inspired a new idea in Karl, and he invented the first gear shift to help the car go over hills and other various terrains. The route Bertha drove is now the Bertha Benz Memorial Route in Germany.

After the drive, the Benz cars became a smash hit, and the Benzes the talk of society. In 1926, Karl and three other men officially founded Mercedes-Benz, and the rest is history.

On her ninety-fifth birthday, Bertha was honored as an honorary senator at the University of Karlsruhe (also known as the Karlsruhe Institute of Technology). Bertha had never been allowed to receive a higher education herself, and so when she died two days later, she died in peace.

In 2018, Mercedes-Benz honored Bertha with two short adverts, which I have linked in this article. In 2016, Bertha was also inducted into the Automotive Hall of Fame. She and her husband represent the first married couple ever inducted into the hall.

By the way, Bertha is also credited with creating the world’s first brake pads, so she was an inventor too.