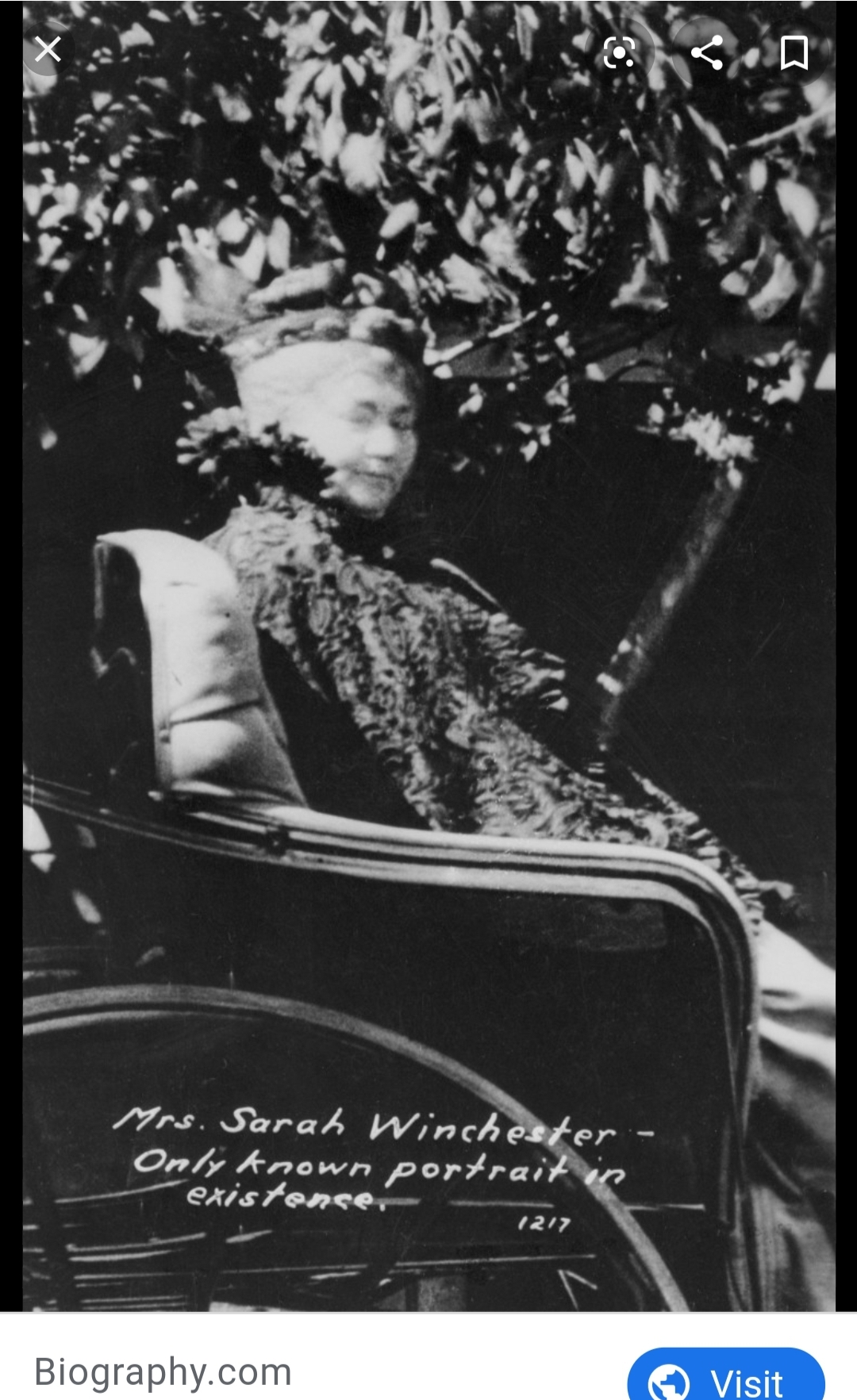 Folk Figure and Heiress to the Winchester Repeating Arms Fortune

Sarah is remembered for continually building on her home in San Jose, California—purportedly to keep the spirits killed by Winchester rifles from haunting her.

Sarah was born to a wealthy upper-class family in Connecticut, but the exact year of her birth remains unknown to this day. She was one of seven children and educated well. In fact, Sarah was taught four languages and attended a school for young ladies.

By the time Sarah was of eligible age to marry, her parents had already decided on a husband. His name was William Winchester, and he was the only son to the Winchester Repeating Arms Company fortune.

Sarah’s only daughter Annie died when she was only forty days old from marasmus—the inability to absorb nutrients and proteins. In essence, Annie starved to death and there was nothing her parents or doctors could do to help her. Sarah and William would have no other children.

In 1881, William died suddenly from tuberculosis, only a year after his own father’s death. By then, historians account that Sarah’s mental health was already starting to fail. She was never able to fully recover from her daughter’s death, and others believe Sarah was also haunted by the wealth her Winchester family collected. In her eyes, Winchester money was blood money.

With William’s death, Sarah suddenly inherited a fortune estimated to be about $20 Million, around $500 Million today. She also received a 50% stake in the Winchester company. Although Sarah never had anything to do with the daily workings of the company, her stake in it meant she was receiving an additional $1,000 a day (or $26,000 per day in 2019 dollars).

This is where Sarah’s life story becomes a bit twisted. According to some, Sarah went to visit a psychic medium in Boston, who told her she needed to find a way to appease the angry spirits of those killed by Winchester Rifles. This goes along with the popular notion that Sarah only built the Winchester House to appease such spirits. Others claim Sarah didn’t build the house for spirits at all, and instead she was simply interested in other notions like Freemasonry and Rosicrucianism. Whatever the case, Sarah soon packed up and left Connecticut behind, settling in San Jose, California.

In 1884, Sarah purchased an already existing farmhouse instead of consulting an architect to build something new just for her. From 1886 until her death in 1922, Sarah continually had carpenters building onto the already existing structure. The house would eventually reach seven stories in certain sections. The layout of the house also makes no sense to any “normal” person looking in from the outside. There are staircases leading nowhere, doors opening out into the air, windows that open into interior rooms, and hallways that circle back on themselves for no apparent reason. To say its easy to get lost in the mansion is an understatement; what house with over 160 rooms wouldn’t be confusing?

The house wasn’t just odd though, it was also decorated and designed to have all the trappings money could buy. The home had one of the earliest designs for an indoor shower, running hot water, central heating and air conditioning, and other amenities. Mrs. Winchester was also tiny and suffered from debilitating arthritis, so certain staircases built just for her have stairs that are actually made from risers and are only several inches apart to ease the ache in her joints.

After so many decades of incessant building, Sarah passed away peacefully in her sleep. Her niece and secretary would sell the house at auction soon after.

Today, visiting the Winchester Mystery House is still a major tourist attraction in Southern California. You can tour the house itself as well as other buildings on the property, and sometimes the tour guides will tell ghost stories during the tour. Unfortunately taking photographs inside the house is not possible because of copyright issues, but photos of the grounds itself are permitted. In 2023, the house will celebrate one hundred years as a tourist attraction.