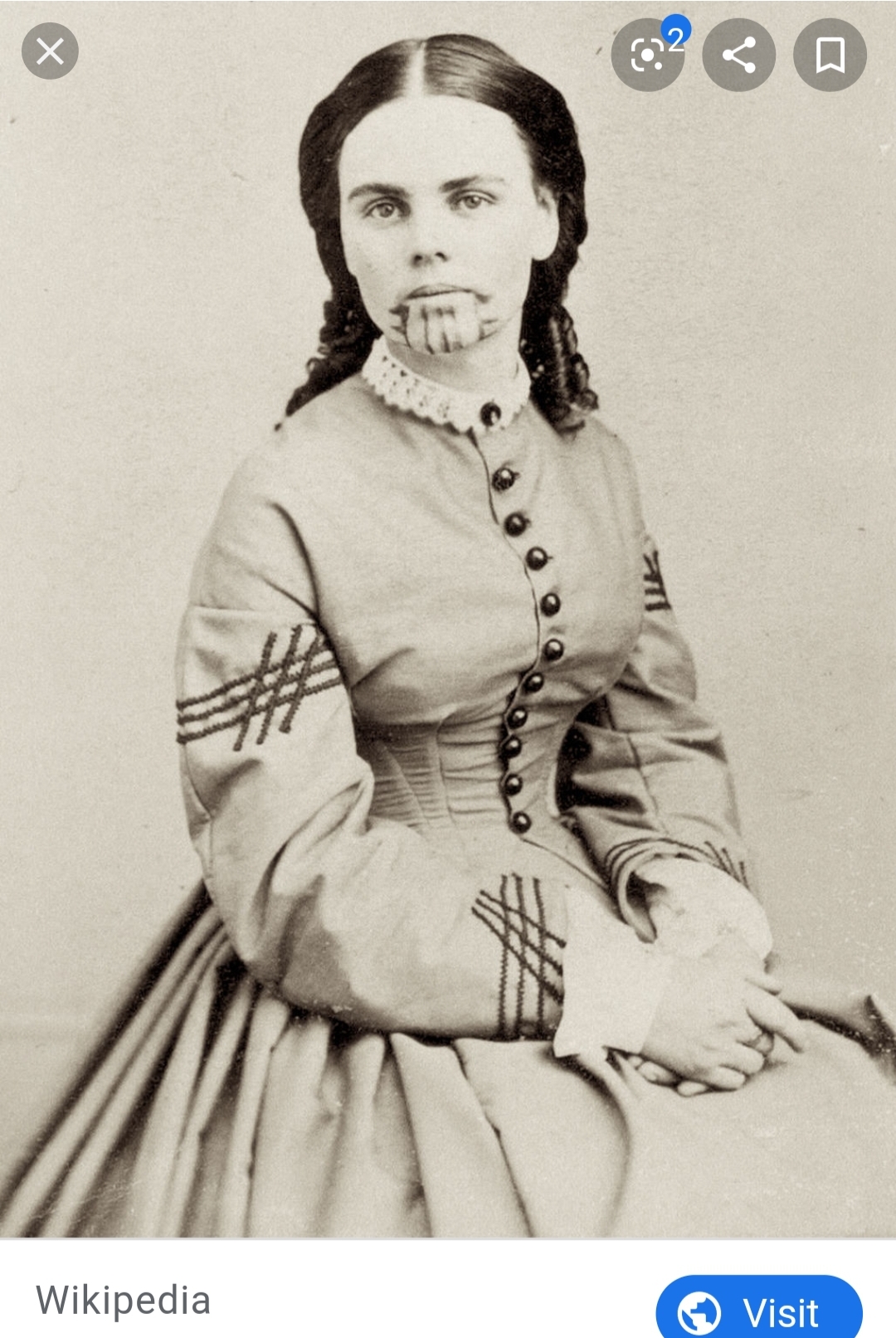 "To the honor of these savages let it be said, they never offered the least unchaste abuse to me."

Olive was captured with her sister in 1852 when her family was emigrating to California (they were actually captured near the Gila River in present-day Arizona). The Oatman family were traveling west with other members of a sect of the Church of Jesus Christ of Latter-Day Saints; specifically, followers of a man named James Brewster, who disagreed with Brigham Young and decided to break away from the leaders in Salt Lake City, Utah. The Brewsterites, as they were called, left Illinois in August of 1850, heading for Southern California.

Originally the group was around ninety in total, but they split up partway along the journey. James Brewster headed north, while the Oatman family and a few others headed south. While it is not definitively known which band or tribe captured Olive and her sister, some historians believe it was the Tolkepayas Yavapai. Whichever tribe it was, they killed the Oatman parents and several of their children, badly injuring Lorenzo Oatman, and taking Olive and Mary captive.

For a year Olive and her sister served as slaves before being sold off to a Mojave chief, where they were adopted into his family. Her sister Mary died from starvation and abuse during this time. It is believed Olive was fourteen and Mary seven at the time of their kidnapping, and Mary died around the age of eleven.

In 1856, Olive was ransomed back to her only surviving family member, the aforementioned brother Lorenzo, at Fort Yuma, Arizona.

Afterward she sold her story to a man who wrote a book and the royalties paid for her and her brother’s education. Though many claimed Olive was glad to be free of her Mojave captives, the truth is less clear. Surviving evidence seems to indicate Olive grieved the loss of her Mojave family and culture deeply. She had been away from white civilization for five, formative years by the time she was returned to her brother, and she had grown very close to her Mojave family. For the rest of her life, Olive suffered from what some have deemed Post Traumatic Stress Disorder, or maybe Stockholm Syndrome, or even both.

After the publication of the book, Olive went on a lecture tour and eventually married, moving to Texas. While living in Texas, Olive and her husband adopted a little girl named Mamie. Olive remained interested in caring for orphans for the rest of her life, but rarely spoke of her time amongst the Mojave or Tolkepayas, leaving much of that part of her life a mystery. She passed away at the age of sixty-five from a heart attack.

Today, there is a ghost town in Arizona named in her honor: Oatman, Arizona.

Captivity of the Oatman Girls: Being an Interesting Narrative of Life Among the Apache and Mohave Indians by Royal B Stratton

The Blue Tattoo: The Life of Olive Oatman by Margot Mifflin