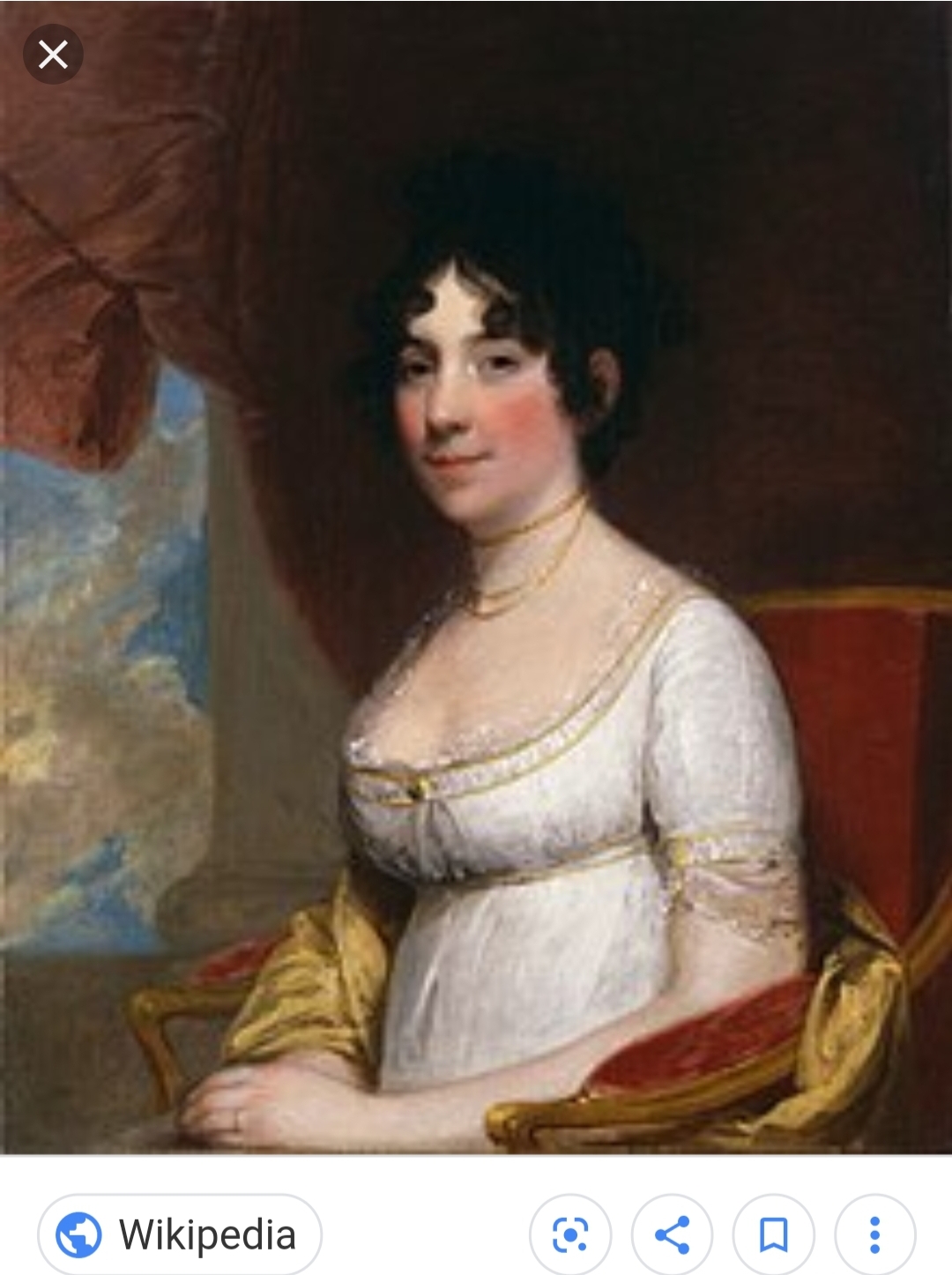 "I confess that I was so unfeminine as to be free of fear, and willing to remain in the [White House]. If I could have had a cannon through every window, but alas! Those who have placed them there, had fled before me."

Her name is often misspelled as Dolly.

(Some sources state she was born under the name of Dorothea, but according to the White House’s official biography of Dolley, the Society of Friends recorded her name as Dolley and not Dorothea at the time of her birth).

She was raised as a Quaker and had to wear simple grey dresses with no makeup or jewelry (though her grandmother would give her jewelry to wear under her dresses).

Her father emancipated his slaves because Quakers did not believe in the practice. Dolley had no formal education and was married first to John Todd—a fellow Quaker and lawyer when she was twenty-one. They would have two sons together; John and their younger son William would die in a yellow fever outbreak leaving Dolley a widow with a young son to care for.

When she was twenty-six, she married James Madison who was forty-three at the time and had never been married nor had children.

She was expelled from The Society of Friends (The proper name for Quakers) following her marriage because he was not a Quaker.

Her son, John Payne Todd, was troubled and spent most of his adult life addicted to alcohol and gambling—his stepfather James would pay most of his debts throughout his life but after James died Dolley was pushed to the brink of financial ruin by her son.

James and Dolley spent most of their time at his plantation Montpelier in Virginia.

During the Jefferson Administration, James Madison served as Secretary of State and Dolley and her sister Anna worked to fill the vacant role of First Lady. During this time Dolley also helped raise funds for the Corps of Discovery.

Dolley was the first First Lady to highly publicize her role and make the role more than simple hostess for her husband. She was remembered for her distinctive turbans she often wore.

Dolley was also the first First Lady to focus on a specific goal: opening a home in DC for orphaned girls.

She is also remembered for her patriotism in ensuring the Washington Portrait was removed to safety from the White House before leaving during the War of 1812.

Her debts would become so large after her husband’s death she would have to sell Montpelier and was only saved when Congress agreed to purchase some of Madison’s notes from the drafting of the Constitution.

She was given an honorary position in Congress and was the first private citizen to send a telegraph.