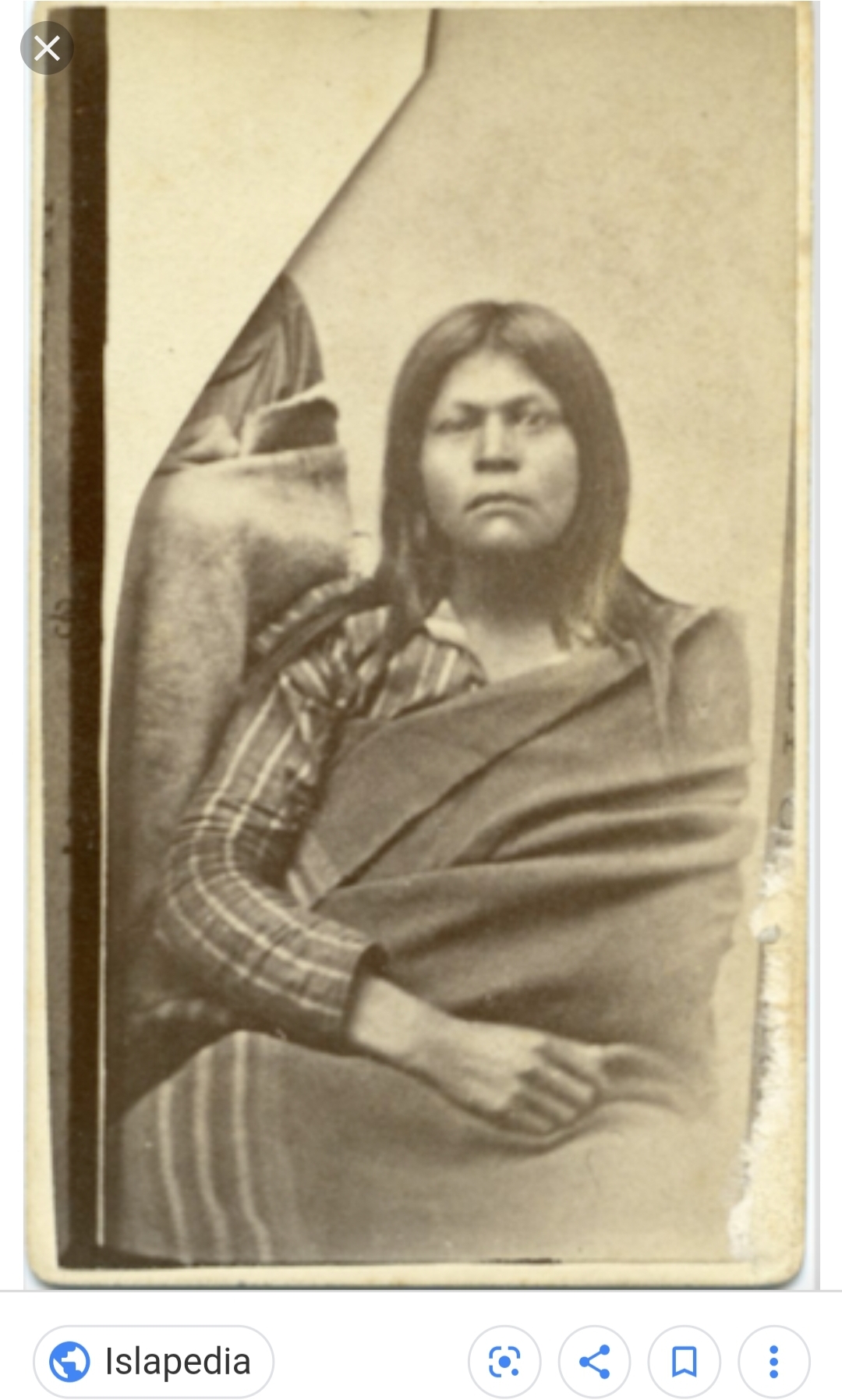 She was the last survivor of her Native American Tribe the Nicoleño who inhabited the island San Nicolas just off the California coast.

The island is so barren and desolate today the United States Federal Government was considering it as the site to test the first nuclear bombs, and is today used by the military to test other weapons. San Nicolas is one of eight islands in the Channel Islands network.

Juana was discovered on the island in 1853 after living alone there for approximately eighteen years (see notes below). After being taken to the mainland she was baptized by Catholic Priests and given the name Juana Maria however her real name is unknown.

Her people had all died off by the time she arrived in California (their immune systems were not equipped to fight foreign germs--see additional Note below) and so no one could understand her language.

Her tribe is thought to have lived on the island for possibly as many as 10,000 years. In 1811, the island was attacked by Russian fur hunters who raped the women and massacred the tribe. The Spanish soon arrested some of the Russians wanting a piece of the action for themselves but by then it was too late and most of the Nicoleño men were dead.

In 1835, missionaries arrived on the island and somehow convinced all but two of the island’s inhabitants to get on the ship to go back to California.

The two that stayed were Juana and a young boy; whether the boy was her son or younger brother remains unknown as well—and Scott O’Dell’s version of her jumping off the boat to return to shore is one of the possible explanations (the other is that they simply didn’t notice they weren’t on board until it was too late).

Several ships returned to the island to look for Juana and the boy, but they never found anyone.

After arriving back at the Mission in Santa Barbara and being unable to communicate with anyone someone wrote down one of her songs—linguists today have no idea what the language is, and some claim she was not even Nicoleño.

By the time she was baptized—seven weeks after her arrival in Santa Barbara—she was dead.

Artifacts of her life do remain from when she left the island but an archaeological excavation in 2015 was stopped by a local tribe.

A 2016 article claims researchers have found not all the Nicoleños died before Juana Maria, with one living until 1861, however, the researchers were unable to prove any of those surviving had descendants that can be found today. Until new evidence arises, it would seem the Nicoleños truly are dead.

A 2022 article in National Geographic Magazine stated that further studies done on what is known of Juana Maria make it seem as though the boy on the island with her was her son, and that Juana and her son lived together on the island for many years before he died in unknown circumstances. The article also states that linguists are continuing to try and unlock the clues Juana left behind in her language.

Island of the Blue Dolphins by Scott O’Dell