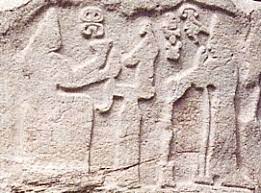 Died: after 1215 BCE, Most Likely Somewhere in the Hittite Empire

Puduhepa was married to Hattusili III and has been referred to as “one of the most influential women known from the Ancient Near East.” Unlike the vast majority of women who lived in her day, Puduhepa’s voice has survived to present-day thanks to the letters she wrote also surviving. The letters were preserved in the Hittite, Ugarit, and Ancient Egyptian archives.

Puduhepa’s father was the local head priest to the goddess Ishtar. After his death, Puduhepa became head priestess in his place. After the Battle of Qadesh (in present-day Syria), Hattusili III (who was not yet king of the Hittites) passed through Puduhepa’s hometown. While there, he married Puduhepa and brought her home to the Hittite Kingdom.

Puduhepa reigned as an equal alongside her husband, who was often ill and unable to govern in his own right.

Puduhepa was a frequent pen-pal with Nefertari, the queen of Ancient Egypt and wife of Ramses II. Together, Puduhepa and Nefertari helped create the world’s first peace treaty—The Treaty of Qadesh (and to be fair, Ramses was also involved in the crafting of the treaty, but Puduhepa’s husband? Not so much).

Puduhepa’s letters also survive in the Ugarit archives. Her letters to the Ugarit king (in present-day Syria) concern reimbursements for a sunken ship and other tax matters. Basically, all of this means that Puduhepa was unusually powerful for a woman of her era. Instead of being a subordinate to her husband, she ruled in her own right and was addressed as being an equal to her husband by rival kings and queens.

After her husband’s death, Puduhepa moved into the role of a queen mother during her son’s reign. A clay impression seal discovered in 1936 shows Puduhepa and her son ruling side by side. Though her death was not recorded, she is known to have lived several years into her son’s reign.